To make way for the arrival of Emirates services to Kiev Borispol Airport in January 2014, flydubai recently started daily flights to Kiev Zhulyany Airport. flydubai's flights to Borispol will cease at the end of October. Pictured in Kiev Zhulyany celebrating the new flydubai route are Denis Kostrzhevskiy, Chairman of the Board of Directors of Kiev Zhulyany International Airport; Ghaith al Ghaith, CEO of flydubai; and Aleksey Yakovets, Director General of LLC “MASTER-AVIA”.

After a high profile year, during which the country co-hosted the 2012 UEFA European Football Championship (with Poland), Ukraine’s air transport industry suffered the potentially disastrous loss of one of its two main carriers, AeroSvit. Passenger numbers across the country’s main airports had passed the 13 million mark in 2012, with Kiev’s two airports (Borispol and Zhulyany) handling almost 9.4 million on their own. Since 2012, Kiev Zhulyany (the original airport serving Kiev) has been growing rapidly, and promoting itself as a more efficient alternative to Kiev Borispol. In the first half of 2013 its passenger numbers have more than doubled to over 800,000 passengers. 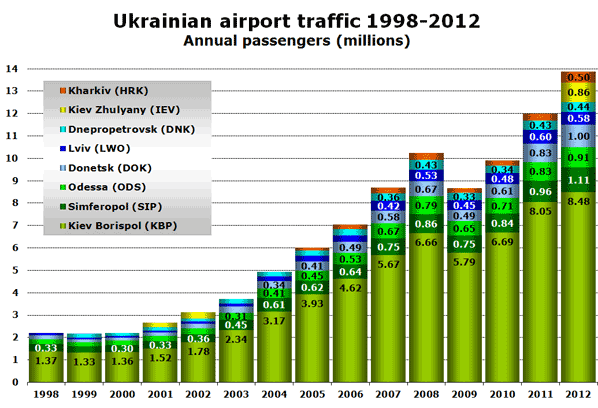 Given that the country is bigger than Spain (but smaller than France) and has a population of well over 40 million people, there is clearly considerable scope for air traffic demand to grow, as the country’s economic prosperity rises thanks to its energy industries.

Following the collapse of AeroSvit, Ukraine International Airlines (UIA), which features as one of this week’s two 30-second interviews, has grown rapidly, more than doubling its weekly seat capacity compared with a year ago. Other local carriers to have taken advantage of the situation are UTair Ukraine, and Wizz Air Ukraine, while Aeroflot from neighbouring Russia has also increased capacity significantly on its existing routes. 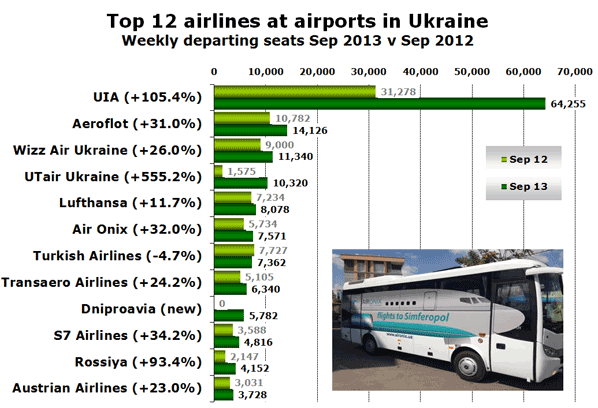 Dniproavia, is once again operating as a stand-alone airline, primarily on domestic routes. It had previously been operating flights on behalf of AeroSvit, but after that airline’s failure, and a brief shutdown earlier in the year, it is now flying once more.

Many new services have been launched already in 2013 to fill the gap left by the demise of AeroSvit. The following table summarises the 40 new services launched so far this year, at the two airports serving the Ukraine capital, Kiev.

Since the beginning of 2013 the following carriers have started new international services to/from airports in the Ukraine other than Kiev.

Wizz Air Ukraine has also announced that it will be launching its third base in the Ukraine from next May. It will base an aircraft at Lviv Airport and launch new routes to Girona, Kutaisi, Naples, Rome Fiumicino and Valencia, to complement its existing service to Dortmund, Milan Bergamo and Venice Treviso. In January 2014 Emirates will launch flights to Kiev Borispol. flydubai has been serving this market but will cease its operation on this route from the end of October, having recently also started daily flights from Dubai to Kiev’s Zhulyany Airport.