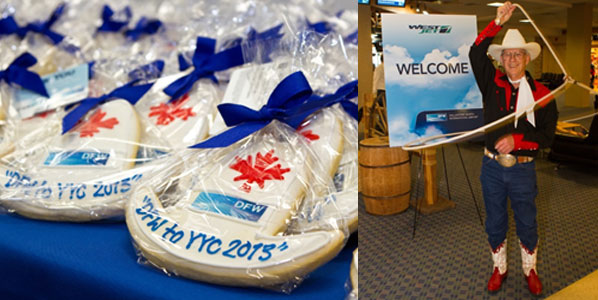 Air Canada remains the biggest provider of weekly seat capacity between the US and Canada (as of October 2013), although it has not launched any new routes between the two countries in the last year. WestJet, in third, shows the fastest growth, helped by its four new launches – one of which was to Dallas/Fort Worth from its Calgary base and; two of which it has maintained until 1-7 October 2013.

The air travel market between the US and its northern neighbour, Canada, appears to be suffering a period of decline. According to Innovata / Diio Mi schedule data for the week 1–7 October 2013, seat capacity between the two countries is down 1.8% this October. Eight of the 12 airlines which serve this country-pair have decreased capacity since the same week last year. The six US carriers have just short of 49% of the seat capacity, down from 49.2% last October. The five Canadian carriers (Air Canada, WestJet, Porter Airlines, Air Transat and Kenmore Air) have grown their combined seat capacity by 0.8%, pushing through the 50% margin, while the US carriers have decreased their offerings by 0.4%. 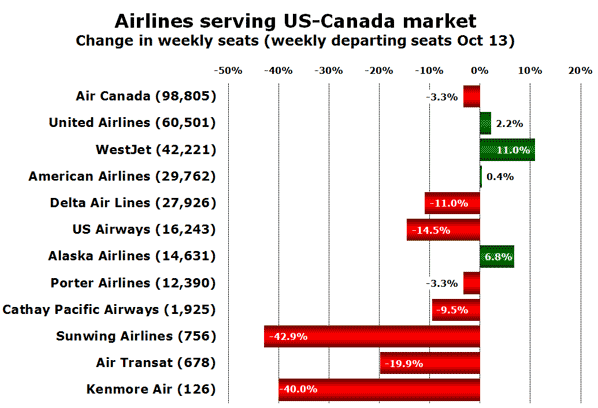 Since last October, Air Canada has remained the leading carrier in this market despite a significant reduction of 3,348 weekly seats. Second and third place carriers have remained unchanged also. Delta Air Lines has given away fourth place to American Airlines, with its 11% reduction in weekly seats (-3,442), the largest net reduction in the number seats offered since last year. The remaining carriers have all maintained the same order; with the only change being the loss of Philippine Airlines’ four weekly services between the two countries (Las Vegas – Vancouver). The only non-US and non-Canadian carrier to operate in the market, Cathay Pacific Airways, offers New York JFK to Vancouver daily; a surprising service offered by the Hong Kong based carrier. The fastest-growing airline in percentage terms is WestJet, which has increased capacity by 11%. Vice versa, the fastest-declining operator is Sunwing Airlines, which reduced its offering by 42.9%, albeit from a relatively smaller base.

anna.aero has determined that 13 new services have been started in the last 12 months, of which only eight are still operating by the week 1-7 October 2013, the others all being seasonal operations. Of these remaining eight services, a quarter of them are operated by Canadian carriers, with Chicago O’Hare and Quebec City leading the route retention league, with two new services each.

United Airlines launched the largest number of services and still operates five of the six started — its Washington Dulles to Vancouver was a peak summer season operation only. The other US carrier in the table below, Delta, has maintained its only year-round service (New York JFK to Quebec City). WestJet, the only Canadian carrier to launch new routes between the two countries, has continued to operate its year-round services, with the seasonal flights withdrawn as planned.