Wellington Airport predicted to have a record passenger year by anna.aero with an excellent SVID result to boot 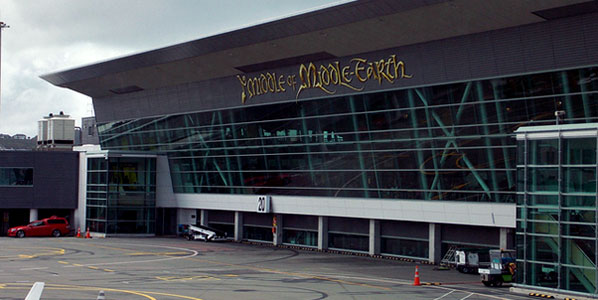 Wellington International Airport outperforms Auckland and Christchurch in anna.aero’s SVID rankings. Located in the middle of New Zealand, its terminal was renamed the ‘Middle of Middle-Earth’ in 2012 for the release of ‘The Hobbit: An Unexpected Journey’, a film taken from the book, ‘The Hobbit’, by English writer, J.R.R Tolkien. “As the first and last impression of our region, everyone will be amazed when they enter the terminal”, said Steve Sanderson, Wellington’s Chief Executive.

Wellington International Airport is located six kilometres south-east of Wellington, the capital city of New Zealand. Situated on the south-western tip of the North Island, the urban area was last estimated to have a population of nearly 400,000 in 2012. The airport has recently boasted its promotion, overtaking Christchurch, to become the second busiest airport for passenger traffic in New Zealand, behind Auckland. Wellington is limited by its single 2,081-metre runway, with direct traffic restricted to domestic flights and to eastern Australian cities. The airport is a secondary hub and focus city for Air New Zealand, as well as being served by four other scheduled carriers. 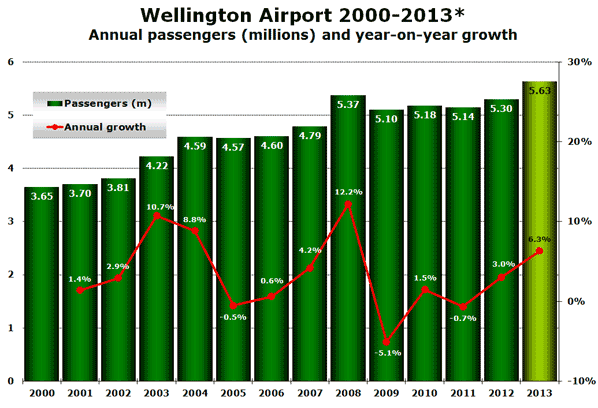 It is clear that Wellington’s passenger traffic peaked in 2004 and 2008, with both followed by periods of decline. Growth returned to the airport post-2011, with the year-end data for 2012 representing an increase in annual passengers of 39.1% over the last decade. Using monthly data recorded so far this year (January-July) and applying the annual growth rate compared with last year, anna.aero predicts a record high for Wellington of approximately 5.63 million passengers by the year-end; not quite a milestone year, but an anticipated return to significant year-on-year growth (>5%) for the central-Kiwi airport.

Entering Wellington’s monthly passenger data for 2012 into anna.aero’s Seasonal Variation in Demand (SVID) calculator, the airport performs exceptionally well, generating a score of 0.45, an “excellent” rating. With almost 50 seasonality performance evaluations, the capital’s airport can be proud of its ranking in joint sixth, alongside McCarran International Airport in Las Vegas and Hong Kong International Airport. To give Wellington a fair evaluation, we also ran calculations on Auckland (0.61) and Christchurch (1.39). New Zealand’s top three airports are each worthy of an “excellent” SVID result, but the #1 spot belongs to Wellington. 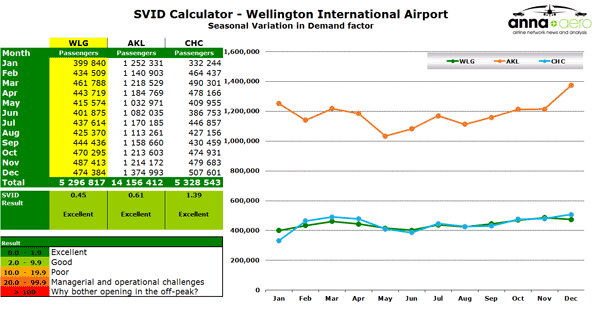 The three leading airlines, according to the number of flights operated in New Zealand, control the top frequency and capacity positions at Wellington. Weekly non-stop flights have only marginally grown (+2.4%) compared with the same week last year. The growth mainly stems from Jetstar Airways’ additional 12 weekly flights. The Australian LCC has increased services to Auckland, adding 11 more weekly flights (now 49 weekly); increased Christchurch from twice, to thrice-daily. However, it has dropped its six weekly operation to Queenstown on New Zealand’s South Island. The growth is also attributed to Air New Zealand, which remains the top airline at Wellington with a net increase of seven weekly flights. Air Chathams has increased its weekly flights offering by one, dropping Christchurch weekly, as well as increasing its weekly Chatham Island operation to thrice-weekly. Virgin Australia has reduced its weekly flights by one, now offering Brisbane 14 times weekly, whereas Qantas’ operations have remained unchanged.

With the same number of marketing airlines as last year, weekly capacity has grown marginally by 0.9% on the same week 12 months ago. Air New Zealand has reduced its capacity share by 2.3% in the last year with 1,166 less weekly seats (the biggest reduction of all five carriers). The most significant capacity reductions made by the flag carrier were; Christchurch (-856 weekly seats), Gisborne (-221), Auckland (-104) and dropping Nada in Fiji completely (-336). The only significant growth in capacity at Wellington, coupled with its increase in weekly flights, has come from Jetstar Airways. The Australian low-cost carrier and wholly owned subsidiary of Qantas, has increased its capacity share by 2.7%, with 1,950 more seats than the same week last year.

Wellington serves a total of 23 non-stop destinations, 20 across New Zealand and three to the east coast of Australia (Brisbane, Melbourne and Sydney). Wellington served 24 non-stop destinations to three countries in the same week last year due to the twice-weekly service, which is no longer offered by Air New Zealand, to Nadi in Fiji. Of the airport’s top dozen routes, 11 have ranked in the same order, in terms of weekly flights, for the last 12 months. The only change in the order is Gisborne in New Zealand, which has dropped from seventh to twelfth with 31.3% less weekly flights (-1.3% share); moving Dunedin, New Plymouth, Sydney, Tauranga and Rotorua up a position each. The route to the largest and most populous city in New Zealand, Auckland (excluded from the chart below), has held onto the #1 spot with a fifth of weekly flights from Wellington. More significantly, the city accounted for 40.6% of weekly seats in 2013, 2.1% more capacity share than the same week last year.

Wellington International Airport has maintained growth in all respects over the last 12 months, with passenger numbers set to hit a record high by the end of 2013 according to anna.aero. This growth is restricted and to take advantage of the demand for both inbound tourism and outbound travel to Asia and the Americas, a runway extension (which is already being discussed) would be required to enable larger aircraft to depart with fuller loads. However, next generation aircraft such as 787s and A350s will enable airlines to travel further from Wellington without such an extension. Both options will improve the airport’s marketing position and may hold the key to direct, long-haul international services in the future from Wellington.