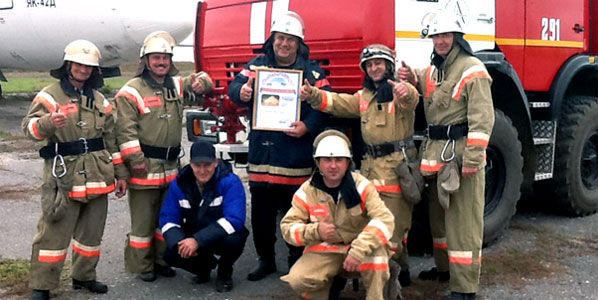 Emirates’ arrival at Clark International, Philippines takes this week’s anna.aero “Arch of Triumph” prize for the best route launch Fire Truck Water Arch (FTWA) with a whopping 32.9 points out of possible maximum of 40, knocking Port Columbus from the pole position it has maintained from the start. Remember: the airport that achieves the highest score in what remains of 2013, will also be crowned this year’s anna.aero “Arch of Triumph Champion.” A special guide of how to play appears at the bottom of this article. 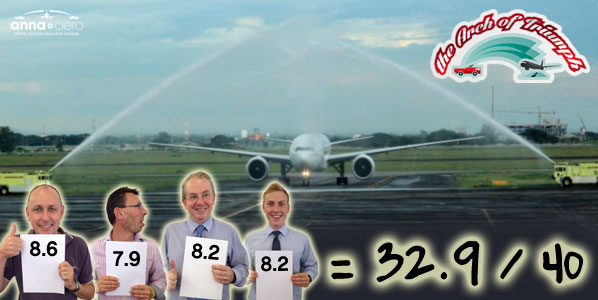 Emirates’ arrival at Clark International, Philippines (or is it Rotterdam?) Can we have a little bit more Philippines flavour next time please!!!!

Marc: 8.6 I am loving this FTWA. There’s no “ohhh…it’s a big plane so must construct a 150m high arch to make sure the precious thing gets through with only a couple of splashes of tepid water on the delicate airframe,” going on. The tenders are up close and personal and delivering a top quality FTWA. Magaling Clark!

Paul: 7.9 I am fantastically impressed with the development of this new airport but this image suffers from lack of placement, or what we call “Stockholm Syndrome” – ie where the hell was this photo taken? As the lady says: “It could be Rotterdam or anywhere…” Having said that, great use of the big Oshkosh trucks and the arches are very good “leaping dolphins.”

Ralph: 8.2 Excellent work from Clark Airport in the Philippines. The two trucks (R-2) and (R-3) are in nice and close and well aligned, but where’s R-1? A few degrees more elevation from the right-hand truck and this could have been even better. 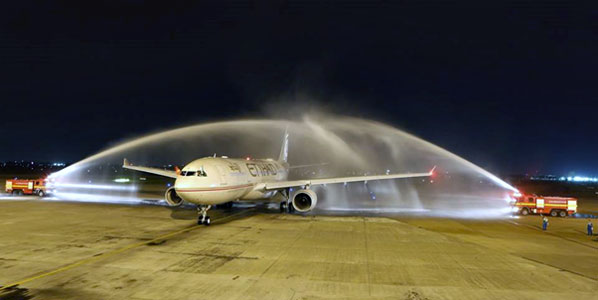 Not a Thrilla in Manila: Our second Filipino offering this week is from the capital, Manila. The judges profoundly disagreed about the quality of this arch.

Marc: 6.2 Unfortunately one and three quarter ‘Leaping Dolphins’ just doesn’t hit the spot for me. And where are those arches meeting? Over engine #1…hindi maganda Manila.

Paul: 9.9 Due to the world economic crisis I am forced to work with terrible judges who don’t recognise a good thing when they see it. This arch is a regional speciality called the “Manila Envelope” in which 2/3 of route launch aircraft freshly emerges from its protective surround. I’m standing to attention with respect as I type.

Ralph: 5.3 Possible wind issues here rather upsetting the attempt at symmetry. The flight crew appear to have opened the windows to wave some flags. Let’s hope they didn’t get soaking wet from the spray. Night-time arches seem to be gaining in popularity!

Steve: 5.8 I love Manila. I’ve never been; I just like the way it sounds. Ma-ni-la. Don’t like this FTWA though, but it shows promise for the future just like the burgeoning aviation market in the Philippines. 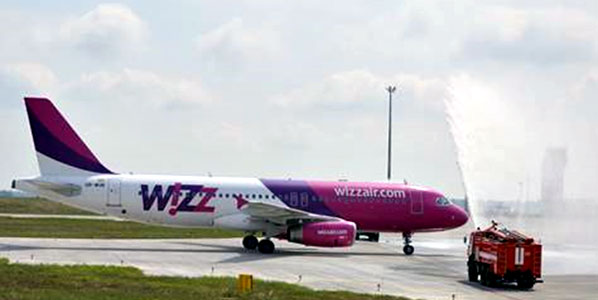 Gee-Wizz: How not to wet the baby’s head.

Marc: 3.2 Oh no. One tender is firing, but has been caught out by the wind. The second tender has obviously been overwhelmed by the significance of the route launch and nerves have kicked-in and have suffered stage fright. Ne khorosho Kharkiv!

Paul: 5.0 This style of FTWA, in which one tender does not eject water, and the other misses altogether, is great if you don’t want to get the aircraft wet. I’m not a fan, but I do like football and Kharkiv was a great Euro 2012 host city, and the scene of the Dutch exit from the tournament at the hands of the Portuguese, with two great goals by Ronaldo. So they get extra points for that.

Ralph: 3.6 This seems to be a solo effort by a single fire-truck. I think we can see a second truck on the other side but where’s its arch?

Steve: 3.6 Hats off to the guys in the closest machine – at least they got something going. The firefighters in tender 2 have not been seen at the station since. 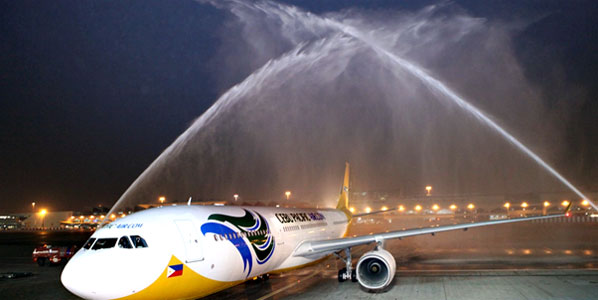 Too much “Tobleroning” going on for my liking…and please get those streams of water delicately kissing over the centre of the aircraft rather than wasting water pressure on the display arch. Tayeb Dubai.

Marc: 6.9 Too much “Tobleroning” going on for my liking…and please get those streams of water delicately kissing over the centre of the aircraft rather than wasting water pressure on the display arch. Tayeb Dubai.

Paul: 7.5 I would have liked to have seen more than the rear-end of one truck and there’s a creeping danger that the arch resembles one of Dubai Duty Free’s epic Toblerones more than a Leaping Dolphin. But this is a tremendously enterprising route and it’s about time Cebu Pacific won a glistening sliver Arch of Triumph to add to their serial anna.aero Cake of the Week and Route of the Week awards.

Ralph: 7.3 Symmetry looks good on this with the point of arch intersection right over the aircraft. Shame we can’t see more of the truck. Is it me, or does paint scheme on the A330 make it look like the aircraft is smiling from this angle?

Steve: 7.2 Pretty aeroplane; pretty arch. Pretty = good and not excellent. Enough said on that one. 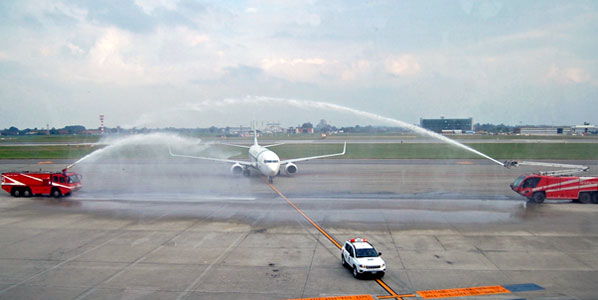 transavia.com’s new route to Turin from Amsterdam. The left-hand truck is executing a “Turin Shroud” to give the arriving aircraft an artistic, ghostly effect.

Marc: 4.6 For all those young Italian firefighters out there, this is a textbook ‘ragazzo grande, ragazzino’. Take it on-board to save you from embarrassment in the future. Non buono Torino!

Paul: 6.0 The truck on the left is feathering his monitor to induce a “Turin Shroud” – a curtain of spray through which the transavia.com 737-800 is still visible, but ghostly in appearance. Other airports have tried to fake it; but this is the real deal.

Ralph: 3.6 A severe case of ‘big-boy, little-boy’ syndrome in Turin. While the fire trucks are neatly aligned on the tarmac the aircraft and ‘follow-me’ vehicle are following the line which is at a 30-degree angle to the trucks.

Steve: 5.0 Half points awarded for a half-perfect FTWA. The right hand side truck is spot on, it is a shame the left hand side makes this a classic ‘big boy, little boy’. 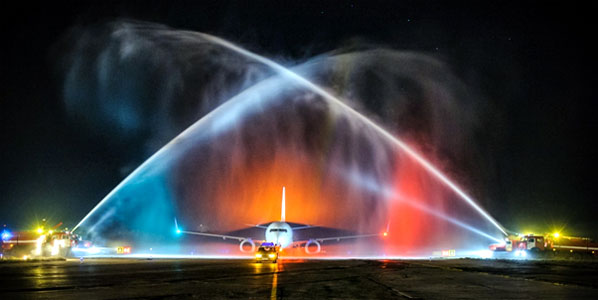 Rostov-on-Don’s amazing water arch echoes the mightiness of another epic stretch of water – the River Don with which this great city shares its name.

Marc: 8.3 My word, this FTWA has got more drama than an episode of Downton Abbey. However, the mood and the lighting is helping to hide a couple of flaws. There is some “Tobleroning” going on, resulting in a “roman cross” rather than a perfect arch. Still…molodtsom Rostov-on-Don!

Paul: 8.0 The Russians have been really on-it during this series of flydubai launches to the region and in all honesty who can say this FTWA is not a thing of beauty? For me these radiant jets of water evoke Pushkin’s poem about the mighty Don with which the great city of Rostov shares its name:

Faithful Don! There also greet thee
Thy true warriors bold and free
Let thy vineyard’s foaming bubbles
In the glass be spilled to thee!

Ralph: 8.8 I love this! It looks the northern lights have been re-created in Russia. Excellent central point of intersection form the two main trucks but the back-up trucks don’t seem to be quite up to it.

Steve: 6.8 I’m mainly impressed with the performance of these Russian-made trucks. I had no idea they were that good.

Emirates inaugural A380 Dubai to Brisbane 2 October (not a route launch, so not being scored) 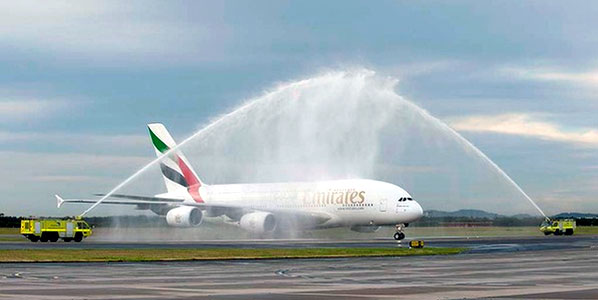 And that’s how it’s done: The boys and girls of Brisbane’s Airservices ARFF execute an absolutely perfect “Leaping Dolphin” FTWA for the Emirates A380 inaugural.

Paul Sadler, Media and Communications Advisor, Airservices Australia sent us this image with the message: “Airservices ARFF have our eye on the 2013 Arch of Triumph prize”. Sadly Paul, this FTWA can’t win this award because salute is being performed for a change of equipment and not a new route (See FTWA rules, Section 3, subsection 2.2, Annex B). However, we would say that this is exactly how it should be done. And, because Airservices ARFF are currently turning out to create fire truck water arches for many similar events – including Melbourne’s first Jetstar Airways’ 787 Dreamliner, and China Southern Airlines’ A380 in Sydney – a special anna.aero commendation awarding 10/10 is on its way.