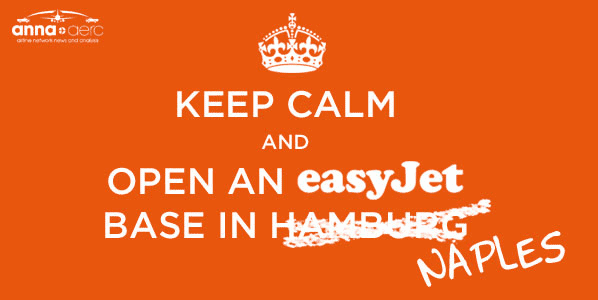 Mamma Mia! After a two-year wait, easyJet has announced two new bases in two weeks, with Naples joining Hamburg in the last few days. Two aircraft will be based there from S14, offering five new destinations, as well as extra frequencies on existing route like London Gatwick.

It has been a busy few weeks for easyJet. Last month, the UK-based LCC announced the opening of its second German base in Hamburg ready for S14 — a week after we announced it for them — along with increasing its fleet in Berlin to eight aircraft. Those of you who have perused the comments on this story will have seen that the next base had been suggested by an anna.aero reader on 26 September, two whole weeks before the official announcement that Naples was going to become base #24. This just goes to prove that anna.aero is the first place you should consult for your market intelligence.

Number one in Naples

Having first started operations in Naples in 2000, the new two aircraft base, easyJet’s third in Italy (after Milan Malpensa with 17 aircraft and Rome Fiumicino with six aircraft), will be operational from S14. The LCC is already Naples’ biggest carrier, transporting 1.6m passengers in the last 12 months (September 2012 – August 2013), representing a 3% increase year-on-year. 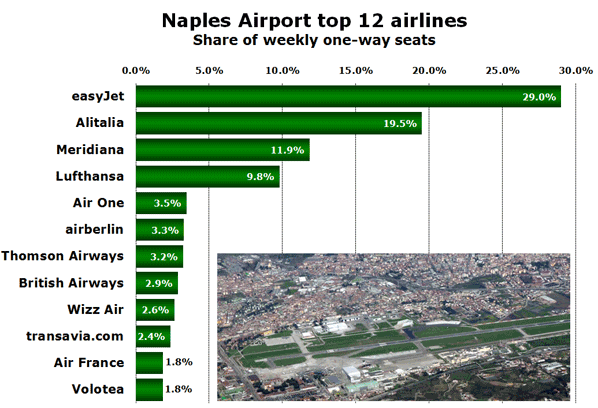 While easyjet is and will remain the biggest airline at Naples, if Air One is added to Alitalia’s tally, the LCC’s market share lead will be cut from 9.5% to just 6%. However, easyJet will reassert its dominance when two aircraft become based in Naples, enabling it to fly an additional 350,000 passengers, meaning that the carrier is poised to reach almost two million annual passengers.

With the airport’s 2013 traffic (January to August) currently down by 7%, this growth will be a welcome shot in the arm for Naples. If the airport continues on this negative growth trajectory for the whole of 2013, it should see annual traffic at Naples of around 5.4 million, meaning that a two million-strong easyJet will command 37% of total traffic.

Unlike the recent Hamburg base announcement, the airline has made it clear exactly what its network intentions are at Naples, and during next summer’s peak season it will be operating 130 weekly flights (it operated 117 in w/c 15 July 2013). It will begin operating five new routes to Hamburg (thrice-weekly from 30 March), Brussels (four times weekly from 31 March), Catania (daily from 30 March), Mykonos (twice-weekly from 1 July) and Corfu (twice weekly from 2 July) on top of its 15 existing routes. The airline will also fly additional frequencies on key existing routes such as London Gatwick which will be increased to twice-daily flights.

“Italy is a key market for easyJet where it has regularly invested and we are delighted to announce that Naples becomes our 3rd Italian base and in Italy’s third largest city,” said Mike Campbell, easyJet Europe Director.

“Naples is a top European destination both for tourism – the city being listed a World Heritage Site by UNESCO – and for business with a wide network of more than 260,000 companies and 2.6 million business passengers travelling to and from Naples every year.”