Germany is the Netherlands’ fourth largest country market, behind only the UK, Spain and the US. Darwin Airline’s launch of 12 weekly services from Leipzig to Amsterdam on 2 September has strengthened Germany’s position in the top country markets.

It has been over two years since we last looked at the Netherlands country market. In that time, the market has grown from just below 49 million annual passengers at the end of 2010, to nearly 56 million by the end of 2012. Looking back to 2003, the country’s regional airports have doubled their respective share of the market from 4% to 8% by the end of 2012. This trend is set to continue in 2013, with Amsterdam’s 3% growth being outpaced by the combined 16% increase delivered by Netherlands’ regional airports (based on first seven months figures).

When anna.aero last evaluated this northern European market, Amsterdam’s record passenger traffic result had been achieved in 2007, but since this last analysis not only has the airport recovered from volume declines in 2008 and 2009, but it has punched its way through the 50 million passenger barrier for the first time, while maintaining its 41%/59% split in terms of transfer vs. terminating traffic. 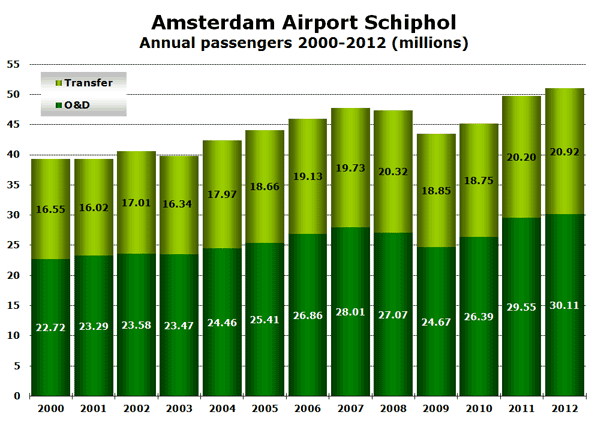 Apart from Amsterdam there are currently four other Dutch airports with scheduled services; Eindhoven, Groningen, Maastricht and Rotterdam, with all five offering a combined 700,000 weekly seats. The country’s second biggest airport in Eindhoven, recently profiled by anna.aero, looks set to break three million annual passengers (for the first time in its history) in 2013, as it is currently growing by 12% (January to August 2013 vs same period in 2012). 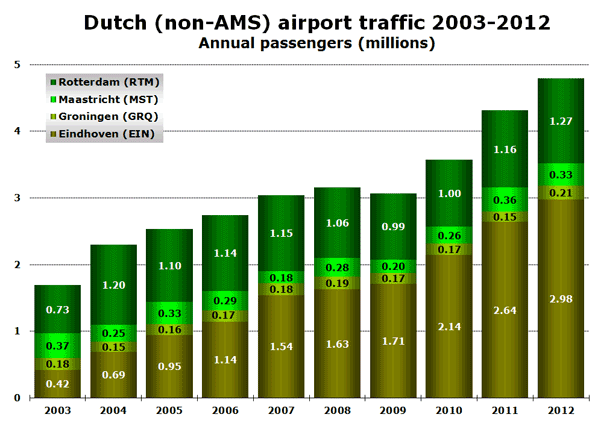 Rotterdam is served primarily by transavia.com with 21 routes, but the port city is also connected to two European hubs, namely London Heathrow (British Airways, 19 weekly) and Munich (Lufthansa, 12 weekly). Fourteen of Maastricht’s 17 scheduled services are provided by Ryanair, with the remaining three by transavia.com. Still-to-launch Maastricht Airlines, which mooted the launch of services to Amsterdam, Berlin and Munich, would have added to the airport’s offer, but is yet to come to fruition. Ryanair and transavia.com also dominate at Groningen, with its seven destinations split four to three in the Dutch airline’s favour, with its offer of two domestic (Rotterdam and Maastricht) and two international (Faro and Las Palmas) services.

The UK is by far the leading country market for scheduled flights from Dutch airports. No less than 27 UK airports have direct flights to the Netherlands operated by a range of carriers including Air France, British Airways, Darwin Airline, easyJet, Flybe, Jet2.com, KLM and Ryanair. Not one of these UK airports has more than two carriers operating to the Netherlands, with Birmingham, Bristol, Edinburgh, Glasgow, Leeds Bradford, London City, London Gatwick, London Heathrow, London Stansted, Manchester and Newcastle being those airports offering more than one airline choice to the country. Since anna.aero last conducted this analysis, Spain has ousted the US as the second biggest country market with transavia.com (47% of seats) and KLM (19%) operating the majority of services. Sixteen different Spanish destinations are served with Ryanair (10 destinations), Vueling (eight) and AirEuropa (one) also present. 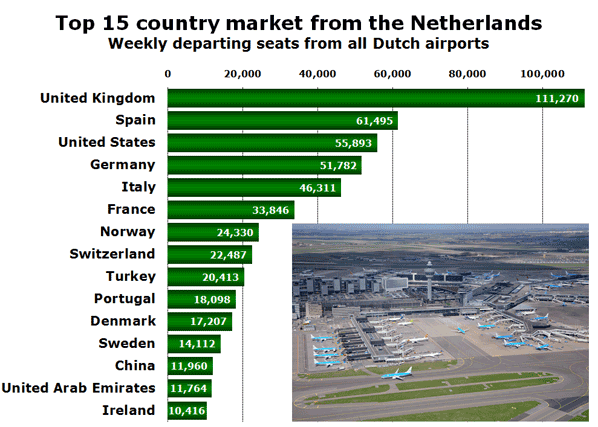 While most of the remaining top 15 country markets are in Europe, US (3rd), China (13th) and UAE (14th) also make the list, the latter being a new entrant over the last two years, with an extra six weekly flights being added in that time. This October, KLM will be serving Dubai and Abu Dhabi with daily flights, Emirates (Dubai) and Etihad Airways (Abu Dhabi) both connect daily to their respective hubs, with the remaining 11 weekly services being split between Garuda Indonesia (six to Abu Dhabi), Arkefly (thrice-weekly to Dubai) transavia.com (twice-weekly to Dubai).

KLM and partners have over 60% of capacity

Although over 70 airlines serve the Dutch market KLM, Air France, transavia.com (which KLM owns) and Delta Air Lines (its SkyTeam partner) share just under 65% of scheduled capacity (up from 62% two years ago). The leading non-KLM associated airlines are easyJet, which has leap-frogged Delta into #3 spot, and Ryanair which has maintained its position in fifth, but has grown its capacity share by 1.1%.

easyJet currently operates to Amsterdam from 12 UK airports, two airports in each of Italy and Switzerland, as well as Berlin and Prague. Ryanair operates 14 routes from its first Dutch base (and 51st in total) in Maastricht, and 31 from its second Dutch base in Eindhoven (#52), as well three routes in Groningen, inbound from its Milan Bergamo, Girona and Palma de Mallorca bases.