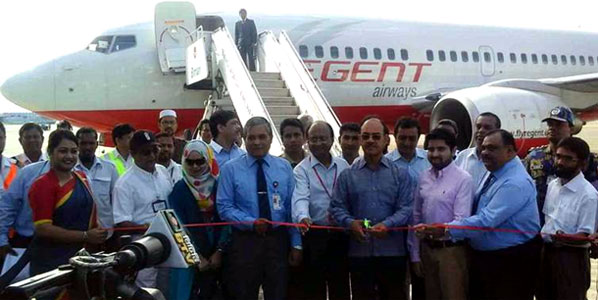 Home to more than 150 million citizens, Bangladesh has long attracted significant interest of foreign investors, especially those from the fashion industry. In fact, over the last two decades the country became a garment power, trailing only China in global clothing exports. However, other industries, like ship building and tourism, are gaining strength too. The population’s economic standing continues to improve and so do the prospects for commercial aviation in Bangladesh. Taking advantage of these positive changes was the Habib Group, the prominent Chittagong-based conglomerate, which decided to launch a new domestic carrier, Regent Airways, back in November 2010. Nearing its third anniversary, the airline is nowadays the second-largest domestic operator at Dhaka International Airport. But the airline’s story doesn’t end there: beginning in July 2013, Regent also commenced its international expansion, most recently fuelled by the new service from Dhaka to Bangkok.

Heavy competition on all six routes

According to Innovata’s average weekly capacity data, Regent offers 146 weekly flights this October, which constitutes an increase of 16.6% on the same period of 2012. The airline, which initially operated two 50-seat Q300s in an all-economy layout, has recently added two 737-700s to its fleet. The new narrow-body equipment, which was procured from ILFC on a six-year lease, takes 126 passengers (12 in business class and 114 in economy) and has allowed the airline to make its first inroads into the international market from Dhaka. As a result, seat capacity in October 2013 has increased by 44.5% as compared to October 2012. 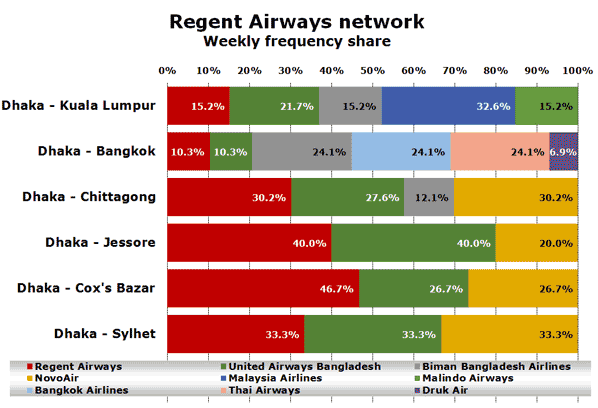 At present, Regent operates a total of six routes, all of which originate in its Dhaka hub. Of these, four are to domestic destinations — Chittagong, Jessore, Cox’s Bazar and Sylhet. The remaining two involve international destinations in South-East Asia – Kuala Lumpur (launched with daily frequencies on 15 July) and Bangkok (thrice-weekly flights commenced last week). Competition is tough, especially in the two international markets, in which Regent faces — amongst others — such established international players like Malaysia Airlines (to Kuala Lumpur) and Thai Airways (to Bangkok).

In the domestic market, Regent has partly benefited from the misfortunes of the nation’s flag carrier, Biman Bangladesh Airlines. A 44.1% reduction in domestic seats from the capital by the latter in the period since October 2012 made Regent Dhaka’s second-largest carrier. The airline now has a quarter of all weekly domestic seats departing from the Bengali capital.

United Airways Bangladesh is currently Regent’s largest competitor in the domestic market. It has 30.2% of weekly seats from Dhaka and offers services on all four routes operated by Regent. While, at least in the short-run, Biman is unlikely to affect Regent’s operation, there is a new kid on the block, and one that has grand plans too. NovoAir, which commenced operations on 9 January 2013 (winning the anna.aero Route of the Week prize), serves exactly the same set of domestic destinations as Regent and already has 21.1% of the market in Dhaka.

More international services in the pipeline

While Imran Asif, CEO of Regent, recognizes the fact that “most of the air travel market to and from Bangladesh has been taken up by the foreign carriers owing to the fact that the local airlines, including Biman Bangladesh, has failed to operate and expand to capture the growing market”, he has steadily pushed his company towards international expansion. As he points out: “I firmly believe that if the airlines have solid business plans and adequate knowledge of the industry and its potentials, they can well succeed to recapture a significant part of the market lost to the foreign carriers and make themselves sustainable for the long-term”. In fact, the airline has already earmarked Hong Kong, Kolkata and Singapore as its next international destinations and is looking to incorporate them into its network before the year’s end. Imran Asif, Regent Airways’ CEO (pictured fourth left) has propelled the airline towards international growth. In addition to the existing flights to Bangkok and Kuala Lumpur, Hong Kong, Kolkata and Singapore have been indicated as the carrier’s future destinations.