Ready to go! Zagrosjet's one and only A321 gets ready for its maiden flight from Erbil to Ankara on 2 October. The airline's initial schedule consists of routes to Adana, Amman, Ankara, Beirut and Stockholm. 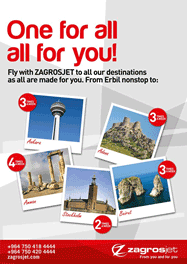 Zagrosjet is a new airline based at Erbil Airport in northern Iraq. It launched its first flight to the Turkish capital Ankara on 2 October, using an A321. This was followed on 4 October by the airline’s first service to Adana, with routes to Beirut and Stockholm launching on 10 and 11 October respectively. Four-times weekly flights to Amman in Jordan are scheduled to start on 20 October. The airline is linked to Turkey’s Atlasjet with which it shares a similarly styled look.

A look at the airline’s schedule reveals that the five routes operated generate a total of 15 weekly rotations, with the aircraft returning after midnight on every day of the week. There would appear to be time on at least four mornings to operate an extra rotation. Other destinations in Turkey have been mentioned, so these may be added before the end of the year.

Competition on four of five routes

Maybe surprisingly, the airline faces direct competition on four of its five routes, with only Adana in Turkey not already served by at least none other airline. Although the Stockholm route has the lowest frequency with two just two weekly flights, the long sector length means that the route accounts for fully one-third of the airline’s ASKs.

Last year Erbil Airport saw passenger numbers grow by just over 50% and reach almost one million, a figure that will be easily passed in 2013. All three of the MEB3 carriers now serve the airport, while European airlines offering flights to the airport include Austrian, Germania, Lufthansa, Pegasus Airlines, transavia.com and Turkish Airlines.