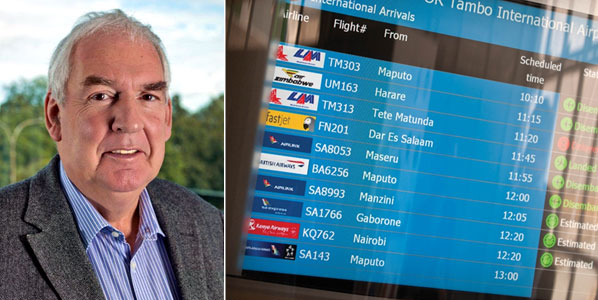 Landed: Proof that fastjet’s first international service made it to Johannesburg on 18 October – a picture of OR Tambo International Airport’s arrivals board. The airline’s CEO and acting Chairman, Ed Winter, wants to see increased capacity on this vital route in the short-term.

After several delays, fastjet launched its first international route to Johannesburg from its Dar es Salaam base in Tanzania last week. Relief all round then for the airline’s management team, headed by industry veteran Ed Winter (who cut his low-cost teeth with go and easyJet), as this important milestone has been finally reached. While building up its domestic and international operations in Tanzania will be undertaken over the coming months, the medium-term will see the fastjet brand expanded across sub-Saharan Africa. anna.aero catches up with Winter to understand the carrier’s grand plan.

anna.aero: Currently you have three aircraft — are they fully utilised?

Ed Winter: You’re right they’re not working absolutely flat-out, but we had planned to start our international routes earlier than we did, so we are resourced up to do more. The start of international services today [18 October] represents a new era for us, so the aircraft will definitely be more occupied over the next few months. Dependent on demand, we will want to see the Johannesburg frequency increased next [started at thrice-weekly], as we want to make sure we satisfy passenger demand on this route, particularly as South African Airways flies it 12 times per week. We also believe that with our low fares we can stimulate demand on this route significantly. So we can react swiftly to the short-term requirements on Johannesburg, we will probably hold back a while on opening up of Lusaka.

aa: Any plans to add to the fleet in next two years?

EW: Presently we are taking all of aircraft on operating leases, and with a plentiful supply at the moment you can get an extra unit on-line in less than two months. This means we can tailor fleet growth to our network requirements. At this stage in our development, the last thing we need is a fixed flow of new aircraft arriving every few months. That will change when we are bigger of course.

aa: After Mbeya on 1 November, what’s next on the network expansion plan? Will it be mostly international given the limited domestic market in Tanzania?

EW: Mbeya is an important domestic destination for us, given its location in the south-west of the country close to the border, as it gives us access to a catchment that spreads into Malawi and Zambia also. Our services will be going into the new Songwe airport at Mbeya, which has been upgraded to allow it to handle jet aircraft operating to international standards. We have worked hard with Tanzanian authorities and its CAA to get the right facilities in place. While we have not been on the route [Dar es Salaam to Johannesburg] the incumbents have been charging crazy prices. High prices restrict the market size. This is the perfect situation for the LCC model to come into the market. On that basis, I could also envisage routes from Kilimanjaro and Zanzibar to Johannesburg. However, Dar es Salaam will remain the focal point for our international expansion — destinations like Lusaka, Harare, Maputo, Lilongwe, Entebbe, Juba, Nairobi and Mombasa are all in our sights.

aa: Are there any other bases in other African nations planned? Ghana and Angola had been mooted in the past?

EW: This type of expansion fits exactly into our business model. Just as you have seen easyJet, Ryanair and now Norwegian do in Europe we intend creating a pan-African network. In sub-Saharan Africa there are 48 countries, all jealously guarding their bilateral route rights and in which we could potentially create a series of fastjet-branded airlines. In countries like South Africa, Kenya, Angola and Ghana fastjet would operate with each country’s regulatory compliance and in effect be a local airline. In many cases, due to rules on foreign ownership of airlines, this will of course involve us having less than a 100% stake in these daughter carriers. However, all of these airlines would use the same fastjet brand, be distributed in the same way and operate with identical safety management systems. So far as the fastjet customer is concerned, they will have same levels of customer service and operational safety across the board. In terms of where first, fastjet South Africa will be on-line sometime next year.

aa: Are there any plans to operate in the more liberal North Africa region as a way of extending the brand?

aa: Are the bilateral issues faced in Africa a challenge which can be overcome or a choke-hold on free development of air services?

EW: You’re right, they do slow things down, but if I didn’t think we could achieve our business objectives of having a pan-African low-cost airline then I would not be here talking to you. It’s no different to when I was at go and we had to fight to gain access onto the London-Prague market – that was in 1999, so not that long ago. Then we were fighting to get designation against the likes of national flag carriers BA and Czech Airlines. In Africa we’re also fighting to get designations against, in the main, national flag carriers. 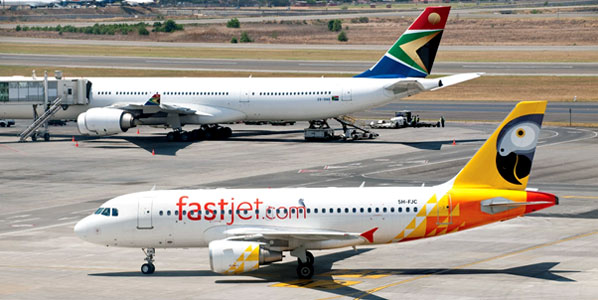 On the ramp at Johannesburg — the start of fastjet’s international operations that will see the pan-African brand spread across the 48 sub-Saharan countries — well, if Ed Winter’s plans are not thwarted by complicated bilateral agreements.

aa: What happened with 1time acquisition?

EW: This was purely an opportunistic situation which would have given us rapid access to the South African market, based around a business rescue of 1time. We tried to find a solution to make it work, but in the end the numbers just didn’t stack up. So now we will have to find ways of starting up on our own in this important market. We know it will be a tough fight against incumbents when we do.

aa: Would you say that low-cost is being embraced in the same way in Africa as it is on other continents – i.e. a real stimulant for passenger growth?

EW: Absolutely! Around 38% of our passengers are first-time flyers. The booking profile is also slowly changing to one found in more mature low-cost markets. When we started, the booking window was a matter of minutes or hours, with passengers turning up at the airport to get on a plane if it was there. This type of passenger activity has a tendency to drive a very flat pricing structure. As we sit here today, the average booking is received 17 to 18 days in advance. We are now getting a fair amount of bookings two to three months in advance as well. The changing profile is allowing us to better revenue manage than we were able to at the beginning. We have been overwhelmed by the response we’ve received.

aa: What percentage of your sales are direct? Do you foresee significant ancillary revenue streams?

EW: Around 80% are direct with the remainder coming through local travel agents. As with most LCCs, we don’t pay any commissions, but we allow the agents to add a service charge. Ancillary revenues, mainly bags and change fees, currently contribute around 7% of our average $81 per passenger income. People told us that you will never get passengers to pay for their bags. But they do. In the future we expect to introduce charges for some types of allocated seating, which will see this sector of our revenues grow further.

aa: We have heard that the UK government is likely to subsidise a PSO route from St Helena to Cape Town and possibly Ascension Island when the airport opens in 2016. Do you fancy that?

EW: I didn’t know about that…but I doubt a Tanzanian airline would qualify!