A new start: In late 2012, Afriqiyah Airways unveiled its new livery. Three blue stripes on the tail represent the neck markings on the Turtle Dove, a migratory bird distributed across Europe and North Africa and a universal symbol of love. It replaced the old paint scheme, reminiscent of Gadaffi’s flagship undertaking – the creation of the African Union on 9 September 1999.

Located in the Maghreb region of North Africa and roughly the size of the US state of Alaska, Libya is the world’s 17th largest country (and the fourth largest in Africa), one that is in possession of the world’s 10th largest proven oil reserves. However, as a predominantly desert country (nearly 90% of its land is taken up by the sand), Libya is inhabited by less than six million people of which a third lives in the capital city, Tripoli. It is no surprise then that most of the country’s traffic concentrates in only two out of a total of 11 airports – Tripoli and Benghazi. The only scheduled services at the remaining nine facilities are connections to the main airports. Following a bloody revolution in early 2011, Libya has mounted a strong economic recovery and the GDP more than doubled last year, turning round a dramatic 60% decline in 2011. Faster than expected restoration of oil production, and the easing of consumer price inflation to manageable levels, enticed international carriers to rebuild their pre-revolution capacity, but also created a fertile soil for the growth of domestic carriers – Afriqiyah Airways and Libyan Airlines. Nevertheless, the long-awaited merger of the two Libyan operators is yet to materialize and most likely won’t do so before at least early 2014.

Investigation of Innovata’s weekly data for October 2013 indicates that Afriqiyah managed an outstanding annual growth both in terms of weekly frequencies (+54.0%) and seats (+47.7%) as compared to the corresponding period of 2012. In fact, the carrier has largely managed to restore its operation to pre-revolution levels – weekly frequencies are 6.6% above October 2010, while only 3.6% less seats are offered now compared to the same period. 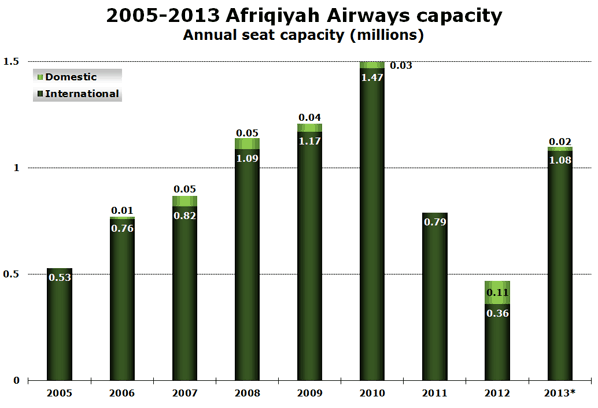 Afriqiyah’s traffic recovery is principally driven by the restoration of the carrier’s international network. This part of the business, which in October 2013 accounts for 57% of the airline’s total weekly seat capacity, grew 73.5% compared to the same period in 2012. International frequencies showed even greater dynamics, with the annual increase nearing 80%. Over the same period, domestic capacity grew more modestly – increases of respectively 12.5% and 5.5% were noted for weekly frequencies and seats.

International capacity yet to be fully restored

International services have certainly been high on Afriqiyah’s agenda in the aftermath of the revolution. Of the 13 foreign destinations operated at present by the carrier from four Libyan airports, six are new compared to October 2012. Seventy weekly frequencies are currently offered by Afriqiyah in the international market with around 63% of the capacity (44 weekly flights) assigned to the airline’s main hub in Tripoli. 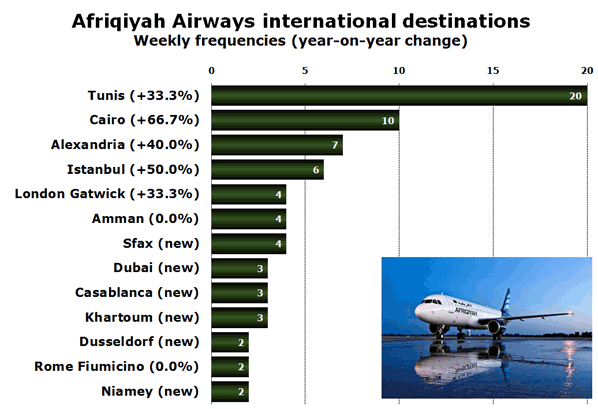 A total of 16 weekly flights to seven international destinations are marketed from Benghazi. Additionally, services to Cairo, Sfax (both new routes in October 2013) and Tunis are operated from Misrata in the north-west of the country; Tunis is also offered with thrice-weekly frequencies as Afriqiyah’s only international destination from Sabha in south-west Libya.

International growth in the regions…

A total of 12 new international routes were launched by Afriqiyah in the course of last year. Tripoli saw a total of six route additions by Afriqiyah since October 2012, of which only two — the thrice-weekly flights to Casablanca and twice-weekly to Sfax — are genuinely new. Düsseldorf, Dubai, Khartoum and Niamey — each offered with twice-weekly frequencies in October 2013 — were operated prior to the 2011 revolution.

The remaining six services were launched in Benghazi and Misrata. Benghazi, Libya’s second-largest city, welcomed four new routes – to Cairo, Dubai, Istanbul and Khartoum, while flights to Cairo and Sfax commenced from Misrata.

Competition in international markets from Libya is considerable, and growing fast. In October 2013, a total of 16 foreign carriers provided services to Libya, accounting for slightly more than half of the country’s international capacity (51.8% weekly seats). In fact, foreign operators increased their frequencies and seat offering by respectively 25.7% and 31.1% compared to October 2012. Tunisair and Turkish Airlines are the two largest foreign airlines in Libya and command respectively 16.1% and 9.0% of the country’s international seats this October.