AirEuropa vs Iberia: My passenger numbers are bigger than yours…or are they? anna.aero investigates… 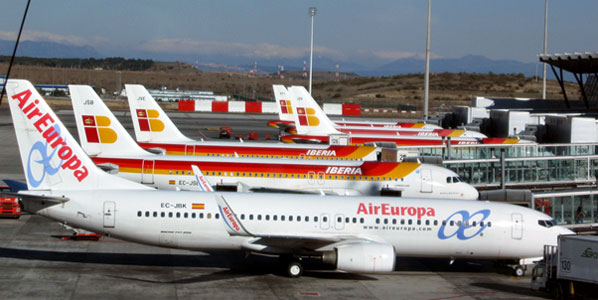 Although AirEuropa is bigger than Iberia, based on 2013 figures so far and when you don’t add Iberia Express and Air Nostrum to Iberia’s figures, it is still smaller than Ryanair and Vueling.

When an airline makes a claim like this — ‘AirEuropa overtakes Iberia in passenger numbers’ — it makes the data elves here at anna.aero scratch their little beards in delight and say: “Let’s take a look at the numbers behind this story”. For as we all know, there are lies, damned lies, and statistics. We are of course not suggesting that AirEuropa is telling us porkies, just merely being economical with the truth. Looking at Graph 1 above, we decisively concur with AirEuropa’s view that it has indeed overtaken Iberia in terms of passengers carried so far in 2013 through Aena’s airports. However, when considering the full picture of the data available from Aena’s excellent data source, the claim becomes a little more unclear.

When analysis of the traffic figures is widened to include the whole Iberia family — namely Iberia Express and Air Nostrum — the passenger figures for 2013 in Graph 2 is achieved, clearly indicating that Iberia is still bigger than AirEuropa. It is at this point that anna.aero’s data elves scratched their beards again, as they tend to only ‘group’ airlines using the same code, and Iberia Express uses IATA code ‘I2’ as opposed to ‘IB’. It should be also noted that not all of Air Nostrum’s flying is for Iberia, but the vast majority is, and it is flown under the ‘IB’ code, which still makes Iberia bigger than AirEuropa, even without Iberia Express. The same arguments can be made for easyJet and easyJet Switzerland, which have been added together in Graph 2, reducing the gap considerably between it and AirEuropa from around 2.25 million annual passengers to just over one million.

Belgium in; Switzerland out

While we have clearly challenged AirEuropa’s recent claims, the last year has been one of phenomenal growth for the airline. According to Innovata / Diio Mi data, the total number of flights in the last year have grown by 18% (seats +9%). For the purposes of the graph below Spain has been excluded, given its scale over other country markets. In October 2013, the Spanish market constitutes 81% of the carrier’s flying, up from 78% a year ago. This is due in part to a 23% increase in sectors over the last 12 months, up from 788 weekly flights to 966. 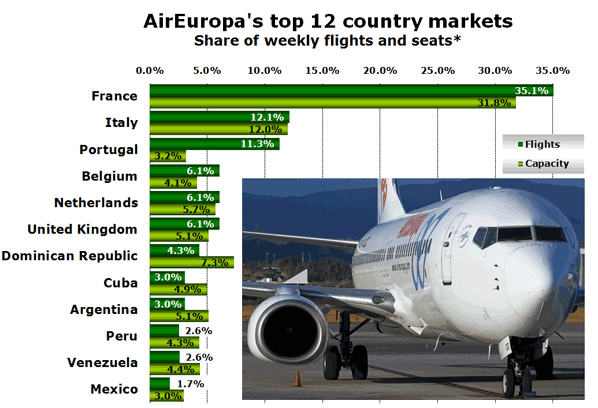 If this chart had been produced 12 months ago, it would have featured Switzerland because of AirEuropa’s 13 times weekly service from Madrid to Geneva, which was withdrawn at the end of March 2013. A recent inclusion in the top 12 country markets is Belgium, which benefitted from the start of double daily flights from Madrid to Brussels launched on 3 December 2012.

The Madrid to Bilbao route has seen the biggest annual growth in capacity of the airline’s top 12 services (+39%), last year being operated four times daily with ATR 72s, however in October 2013, the city pair is flown with less frequencies (down from 28 to 22 weekly), but now operated by the carrier’s larger 120-seat E190s. Another domestic service from Madrid registered the second highest capacity hike over the past 12 months, this time to Palma de Mallorca (+34%). 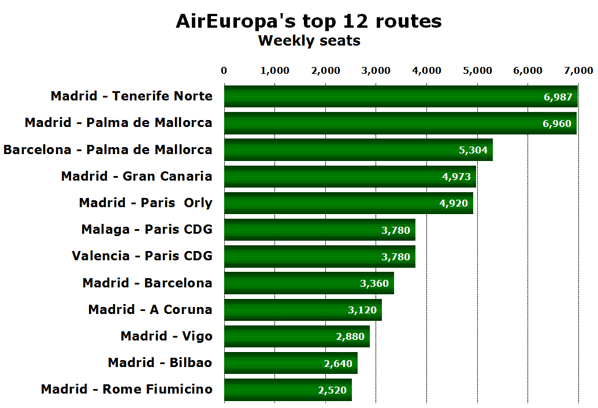 All of the international routes inside the top 12 have received some treatment on the capacity planner’s operating table, with Madrid to Paris Orly taking the biggest cut, at -11% year-on-year. The Spanish capital’s link to Rome Fiumicino was #2 worst offender at -7%, with links from Malaga and Valencia to Paris CDG both down by 3%. The most significant seat trim was saved for a domestic service however, namely the Madrid to Vigo route. The capacity cull may well have been as a result of AirEuropa starting services in June this year to nearby A Coruña, which is just 120 kilometres (by air) from Vigo.