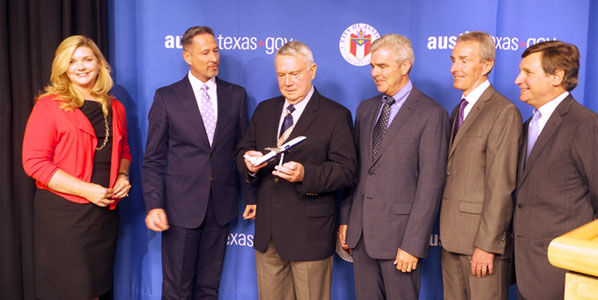 November’s second US Formula 1 Grand Prix from the Circuit of the Americas in Austin, Texas will once more put the city in the global spotlight. Last year’s inaugural event was a resounding success, attracting visitors from all parts of North America, South America as well as some dedicated fans from Europe. Whether this helped the Austin-Bergstrom International Airport (ABIA) to secure its new non-stop service to London Heathrow that begins next March is unclear, but the airport is showing solid signs of growth. 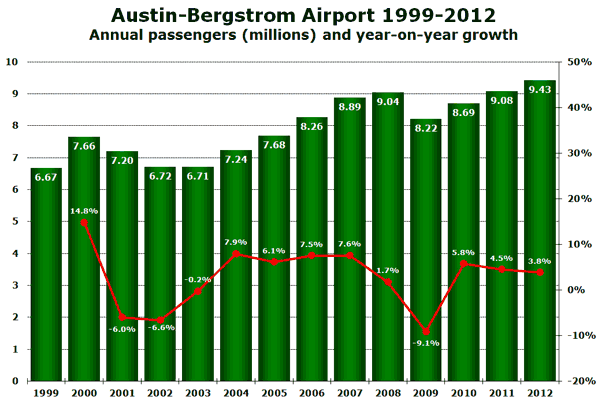 Since 2009, the airport has managed to increase annual passenger numbers by almost 15%, and unlike many other US airports that are still operating below their all-time peak levels, ABIA’s 2012 passenger numbers of 9.43 million represent a new record. So far, in the first eight months of 2013, demand is up 5.7%, suggesting that the airport may break through the 10-million mark this year. 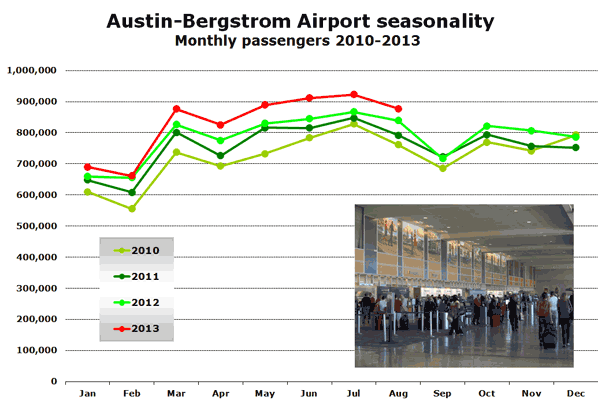 When 2012 data is entered into anna.aero’s SVID calculator Austin scores an “excellent” 0.91, compared with Dallas/Fort Worth at 0.75, Houston Intercontinental at 0.73, and Houston Hobby at 0.78, all of which are also “excellent”, confirming the year-round demand for flights from airports in Texas.

Data from the US BTS RITA system reveals that the Dallas region is the most popular for flights, with services to Dallas/Fort Worth (DFW) and Dallas Love Field (DAL) accounting for around 20% of all seat capacity at the airport. With Southwest Airlines operating flights to Houston Hobby, and United Airlines serving Houston Intercontinental, flights within Texas form a major part of the airport’s offering. 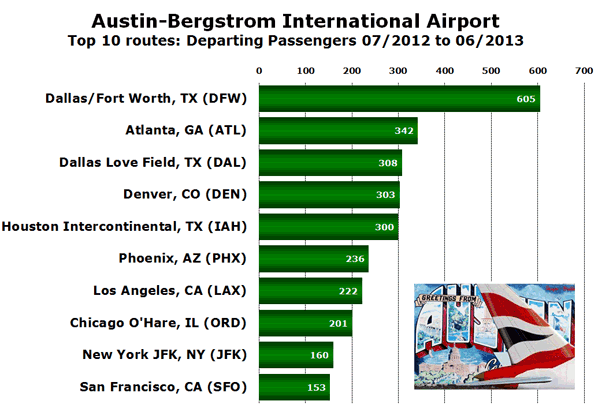 Since the beginning of the year, new services have been added by Southwest to Newark (9 March), Virgin America to San Francisco (21 May), and United to Cleveland (25 September). This week sees the launch of flights to Mexico City with Aeromar, while the start of the winter season will see Allegiant Air begin flights to Las Vegas (four times weekly from 31 October), and Southwest start daily service to New Orleans (from 3 November).

According to figures from the airport Southwest is by far the leading airline. Last year it was responsible for handling almost 3.6 million of the airport’s 9.4 million passengers, an increase of 7.7% on the previous year. In terms of weekly seat capacity this November, Southwest’s share is 41.3%, well ahead of American Airlines (16.6%) and United (15.9%). Delta Air Lines accounts for a further 6.2% of seats, followed by JetBlue Airways (5.5%) and US Airways (4.5%). Austin Mayor, Lee Leffingwell, and Virgin America’s CEO, David Cush, led the celebrations for the airline’s inaugural route from San Francisco, CA. Cush commented: “Austin and San Francisco share deep cultural and economic ties, so it made perfect sense for us to expand our network into this area that deserves not only increased flight options, but a better brand of service. As the only airline serving Austin with WiFi and power outlets at every seat, Virgin America allows business travelers flying between Silicon Valley and the Silicon Hills to stay connected and productive at 35,000 feet.”

In early September the airport revealed that British Airways would be starting non-stop flights from London Heathrow on 3 March, using the airline’s new 787s. Flight will operate five times weekly until May, when the service becomes daily. Sean Doyle, EVP Americas, British Airways said, “We are very excited to be bringing British Airways to Austin. This new route presents an important opportunity for business growth across the Atlantic, particularly in the thriving technology sector. We know that London is among the top destinations for international travel from Austin and equally, Austin is home to some of the most important global cultural events. We are looking forward to providing a convenient and high quality service to new and existing customers.” Jim Smith, Executive Director of Austin-Bergstrom International Airport, said: “London is Austin’s largest traffic generator in Europe. And the route is timed so that Central Texans can fly non-stop Austin to London Heathrow and make easy connections to over 50 other markets throughout Europe, Africa, the Middle East and Asia. The 787 is the newest in aircraft technology and our airport, like Austin, welcomes the latest innovation.” anna.aero's motor sports loving Chief Analyst Ralph Anker was in Austin earlier this year, and took the opportunity to visit the Circuit of the Americas. Apart from the popular F1 race, the circuit has also hosted rounds of the MotoGP series, the American Le Mans Series and the FIA World Endurance Championship. The 3.4-mile (5.5-kilometre) circuit opened in October 2012 and was designed by Hermann Tilke.