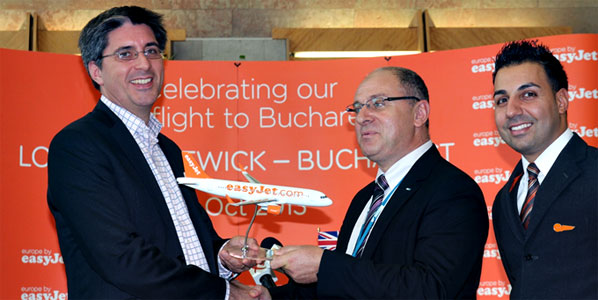 Hugh Aitken, easyJet's UK Commercial Manager presents a model of an easyJet aircraft to Valentin Iordache, Chief Communications Officer of Bucharest Airports National Company, as easyJet resumed flights from London Gatwick Airport to Bucharest Otopeni Airport on 17 October. The UK-Romania market has grown fourfold since Romania joined the EU in 2007, and this winter seat capacity will be up 40% on last year, thanks to new routes from easyJet, TAROM and Wizz Air.

Joining the EU on 1 January 2007 meant that Romania’s air transport market with the rest of the EU became liberalized, thus enabling new carriers to start services to and from Bucharest and other cities in the country with relative ease. In the UK-Romania market, Wizz Air was the first to grab the opportunity (on 15 January) by starting flights between Bucharest Baneasa and London Luton, followed before the end of the year by both Blue Air and easyJet, who also operated flights from Bucharest’s second, ‘low-cost’ airport to London. easyJet withdrew from the market on 1 June 2008, but after a five-year hiatus has just re-entered the market.

Since then other routes have been launched, frequencies increased, and the market has shown solid year-on-year growth ever since, a rare achievement for any market from the UK during this period. Annual passenger numbers have grown almost fourfold, from a pre-EU level of around 200,000 to just under 800,000 in 2012. Much of that growth has come from new routes to airports in Romania other than Bucharest, though at the UK end, all services are still operating to and from London. In the first six months of 2013, passenger numbers were up once more, this time by just under 8%. 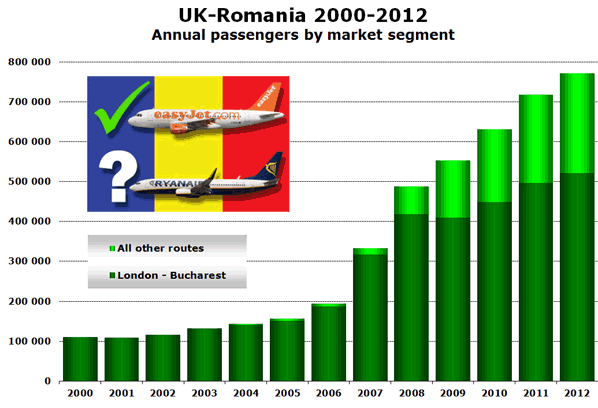 While British Airways and TAROM have long operated the main flights between London Heathrow and Bucharest Otopeni, since 2007 there have been several new services launched, not all of which have been successful.

easyJet’s decision to re-launch flights to Romania is an interesting move as it will compete indirectly with British Airways and TAROM (from Heathrow), as well as Blue Air and Wizz Air (both from London Luton).

Apart from easyJet’s return to the market, this winter sees some additional changes to the UK-Romania market. TAROM is switching its twice-weekly Iasi flights from London Heathrow to London Luton, while Wizz Air is starting twice-weekly flights from Craiova on 29 October, its fifth Romanian route from London Luton. It is also increasing frequencies on its Bucharest route, presumably in response to easyJet’s arrival. As a result, according to Innovata / Diio Mi schedule data, seat capacity between the UK and Romania is up a massive 40% in November 2013 when compared with November 2012. However, despite a small presence in Romania (two Italian routes from Constanta, and two routes from Targu Mures), Ryanair has yet to enter the UK-Romania market.