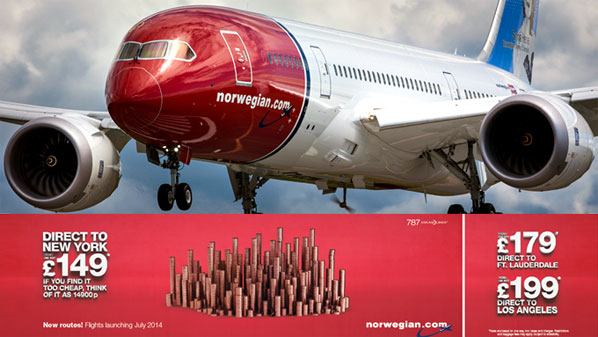 Norwegian will launch a total of seven weekly flights spread across three destinations from London Gatwick, starting 2 July 2014, using its 787 Dreamliners. These flights will represent less than 1% of the existing seat capacity between the US and the UK during the peak summer season.

Norwegian’s recent announcement that it will base one of its 787 Dreamliners at London Gatwick next July, and start non-stop service to Fort Lauderdale, Los Angeles and New York JFK is exciting news for London’s second airport. Fort Lauderdale will be served twice-weekly (Mondays and Fridays), Los Angeles also twice-weekly (Wednesdays and Sundays), and New York JFK thrice-weekly (Tuesdays, Thursdays and Saturdays). With a total of seven weekly departures from the UK to the US Norwegian’s new offering will represent just under 1% of all non-stop flights between the two countries, during the peak summer season.

The UK-US market is arguably one of the most mature air travel markets in the world. Since 2001 demand ‘across the pond’ has varied between a low of 15.8 million in 2010, and 18.6 million in pre-Lehmann Brothers 2007. 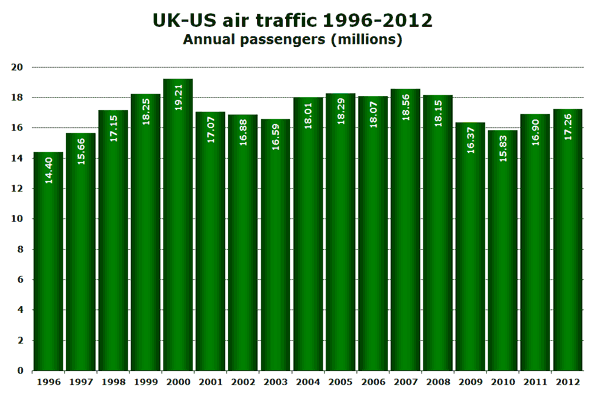 Heathrow accounts for over 80% of UK traffic to US destinations

Since the UK-US bilateral agreement allowed ‘free’ access to Heathrow, several carriers that had previously been denied access to the airport (such as Delta Air Lines and US Airways), were able to move their services across from London’s Gatwick Airport. As a result Heathrow’s share of US-UK traffic has grown from just over 60% in 2007, to 81% in 2012. The almost 14 million passengers travelling between Heathrow and US destinations represents fully 20% of all passengers using Heathrow. 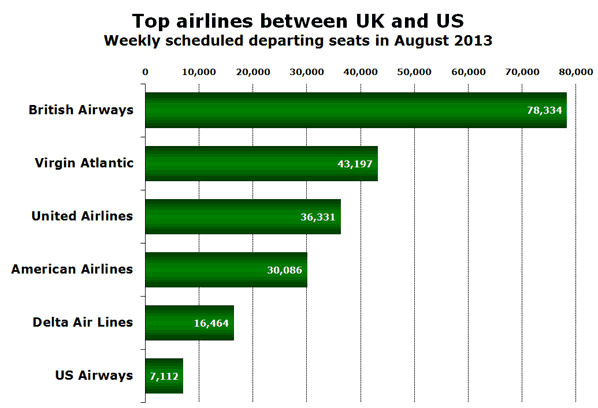 Based on schedule data for this August, the two leading UK carriers have 55% of total seat capacity, while the four US carriers share a further 41%. The remaining 4% is split between various UK ‘leisure’ airlines such as Monarch Airlines and Thomson Airways, as well as Air New Zealand, Kuwait Airways and Pakistan International Airlines.

In terms of new UK-US services there have not been that many developments in recent years. Since the beginning of 2012 United Airlines has added a non-stop service between Washington Dulles and Manchester (in May 2012), while British Airways added a Gatwick-Las Vegas service to complement its existing Heathrow service in October 2012. More recently, at the start of the summer 2013 season, US Airways moved its Charlotte service from Gatwick to Heathrow. As a result Gatwick’s only US services this summer were:

Norwegian’s CEO Bjørn Kjos, said: “There’s great demand for high quality flights at a low fare between the UK and the US, particularly to and from London Gatwick, where no other airline currently offers these routes. We are looking forward to welcoming many new customers on board our brand new aircraft. Launching long-haul routes between London Gatwick and the United States is also an important part of our strategy to expand internationally and get a stronger foothold in markets outside Scandinavia.”

Stewart Wingate, CEO of London Gatwick, said: “This is one of the most exciting route developments since Gatwick’s change of ownership four years ago and shows the benefits to passengers of Gatwick competing with Heathrow on routes, price and service. Norwegian’s decision to re-establish London Gatwick’s links to strategic destinations in North America gives passengers, once again, real choice about how to get there and, importantly, provide options for affordable travel to popular business and leisure destinations. Norwegian’s decision to operate high quality services on new long range aircraft offering good-value fares to the US from London Gatwick is a significant industry game-changer.”