Kelowna Airport: +3.2% growth so far in 2013; LAX and Whitehorse amongst new destinations Connectivity is vital: Welcoming  Air North’s anna.aero Route Prize winning service  from Whitehorse earlier this year and  United Airlines’ flights from Los Angeles in December 2012  was Kelowna Airport’s Director, Sam Samaddar, who commented: “A direct flight makes it so much easier for commerce, tourism, and everything, to take place and it will benefit the entire region. It’s a perfect connection.”

British Colombia’s third-largest facility after Vancouver and Victoria, Kelowna Airport caters to a population of more than 350,000. However, the region’s high appeal for year-round tourism — over 50 golf courses in the area lure golf aficionados with one of the longest and driest golf seasons in Canada, while four world class ski resorts entice visitors during the winter — creates an additional influx of well over 1.2 million visitors to the region. In the course of the last year, Kelowna attracted a number of new services, including the arrival of United Airlines. anna.aero examines Canada’s 12th largest airport’s operation.

In the years since 2007, Kelowna Airport’s traffic results were fairly steady with a percentage point lost in one year only to be recovered in the following one. Throughout 2012, a total of 1.44 million passengers were handled in Kelowna, 3.7% more than in the previous year. 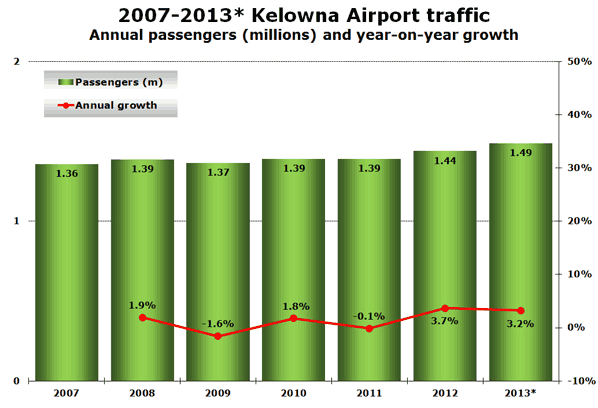 In the first nine months of 2013, for which data is already available, Kelowna Airport recorded a traffic increase of 3.2% compared to the corresponding period of the previous year, with 1.12 million passengers on record until September. If the airport continues on this growth trajectory, it will achieve close to 1.5 million passengers this year, based on anna.aero forecasts.

Seasonality not an issue

Similarly to British Colombia’s two other international airports – Vancouver and Victoria – Kelowna Airport is well insulated against seasonal variations in demand. In fact, an analysis using the anna.aero SVID Calculator indicates that Kelowna is the top performer out of the three.

Having achieved the result of 0.73, Kelowna scored better than the similarly-sized Victoria on Vancouver Island (score: 1.06) and Canada’s second largest facility – Vancouver (score: 1.49). It should be noted however, that all three airports fell into the “excellent” category.

While a total of seven airlines operate in the Kelowna market, as much as 82% weekly frequencies and 89% seats are commanded by only two carriers this October. WestJet, by far Kelowna’s #1 operator, offers flights to five domestic destinations from Kelowna; Air Canada operates multiple weekly frequencies to Vancouver, as well as Calgary in the neighbouring state of Alberta. 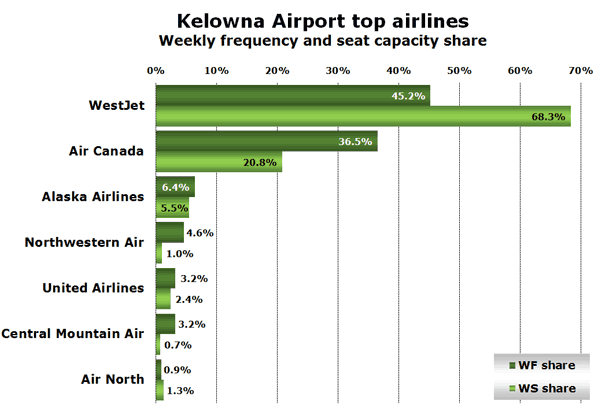 Interestingly, Kelowna’s third-largest operator is Alaska Airlines, which has 6.4% of weekly frequencies and 5.5% of seats this October according to average weekly data from Innovata. In the course of the last year, Northwestern Air added four additional frequencies to its existing Red Deer service, as well as a new four-weekly schedule to Abbotsford, to become the fastest-growing airline at the Canadian airport.

Regional connections on the rise

Roughly two thirds of all weekly frequencies at Kelowna are taken up by flights to Vancouver and Calgary with further 20% dedicated to Edmonton services. Compared to the same period of 2012, capacity to Vancouver remains virtually unchanged in October 2013, while both Calgary and Edmonton note significant increases in weekly frequencies (respectively +5.9% and 16.7%). 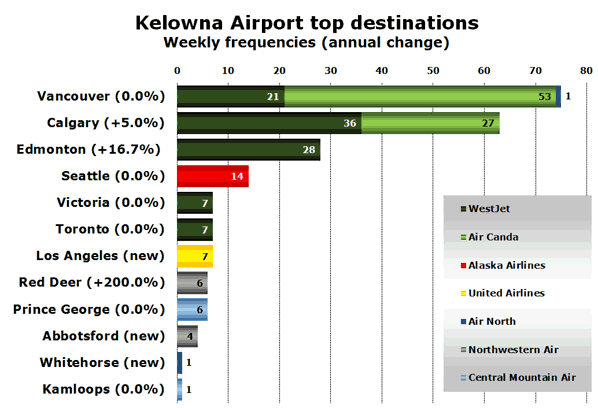 In terms of international connectivity, Kelowna welcomed the arrival of its second US operator almost a year ago, when United Airlines commenced daily flights from Los Angeles, CA. The only other trans-border destination directly available from the Canadian Airport is Seattle, WA, which is offered with twice-daily frequencies by Alaska Airlines.