Avinor, the Norwegian organisation responsible for operating 46 airports in Norway, holds an annual conference, and this week’s event in Oslo, was on the theme of “Business YES – but not as usual”. anna.aero’s Chief Analyst Ralph Anker was invited along to make a keynote address on the current trends in aviation. His presentation, available to download here for free, looked at global trends, European trends, and some issues specific to the Nordic market. Other speakers at the event included representatives from several airlines (KLM, Lufthansa, SAS and Norwegian) as well as Avinor, ERA, EU, Finavia, Oslo Airport and various tourism organisations. 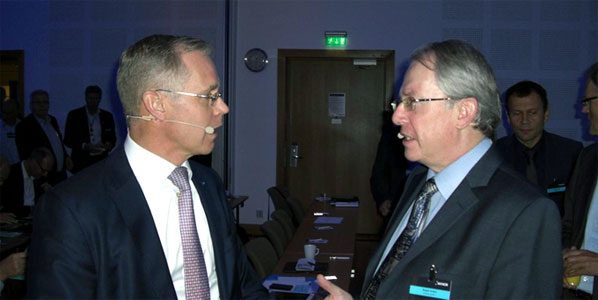 SAS President and CEO Richard Gustafson chats to anna.aero's Ralph Anker before his presentation at the Avinor Conference in Oslo yesterday. SAS has made a notable recovery in the last 12 months. Having come close to collapse last November, it launched 32 new routes this summer and has embraced the idea that to be successful, airlines need to move away from being a fixed cost business, and become more of a variable cost business. To this end SAS's ASKs in January 2014 will be 24% lower than in July 2013. A similar comparison just two years earlier shows the figure to be just 9%.