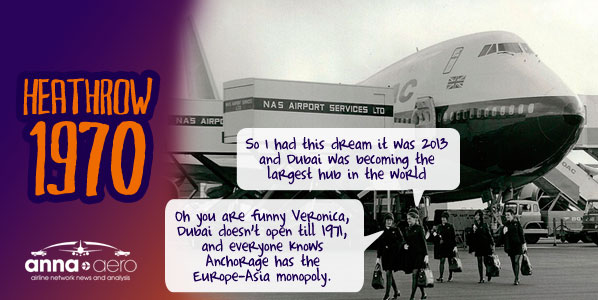 Old jumbos home: London Heathrow Airport is still the world's #1 airport for the veteran 747 with almost twice as many weekly departures as its rivals. But Heathow is only #3, after Dubai and Singapore, for A380 operations, the plane which could make the most of its incredibly hard-to-come-by slots.

With new aircraft such as the 787 now well established, and others such as the A350 and Bombardier C-Series coming soon, it is only natural that some aircraft types are gradually disappearing from the world’s airline passenger fleets. This winter will probably see the last scheduled passenger flights on MD11s as KLM retires its final aircraft, while SAS is phasing out its MD80s (though some of these will find a new home elsewhere). With the Airbus A380 now the undisputed ‘king of the skies’ in terms of size, anna.aero was wondering what was happening with the world’s fleet of its predecessor, the Boeing 747. Although an updated version of the aircraft, the 747-8, is being manufactured and sold (to Cathay Pacific and Lufthansa), four-engined aircraft are not ideal when fuel prices are high – just ask the world’s operators of A340s. So at which airports are you most likely still to see 747s, and from which airports has the type disappeared in the last 12 months?

While Dubai is by far the leading airport for A380 operations (thanks to Emirates’ fleet of almost 40 of the type), well ahead of Singapore Changi, analysis of Innovata / Diio Mi schedule data for this month reveals that London Heathrow Airport is still the world’s #1 airport for 747 passenger operations, with almost 300 weekly departures, well ahead of its nearest rival Taipei Taoyuan Airport in Taiwan. Frankfurt, Hong Kong and Bangkok Suvarnabhumi round out the top five, with San Francisco in 8th place the leading US airport. 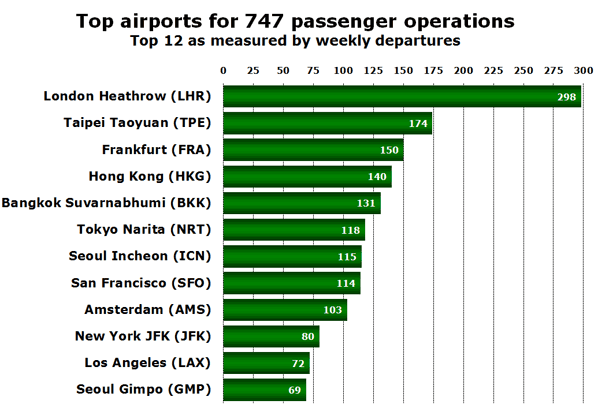 Six of the top 12 airports for 747 operations have actually seen in increase in operations of the type during the last 12 months, with Seoul Gimpo (+47%), San Francisco (+17%) and Tokto Narita (+15%) seeing the biggest gains. A comparison with November 2008 reveals that Heathrow was #1 then as well, ahead of Hong Kong and Tokyo Narita. Since last November the number of 747 flights has fallen globally by a relatively modest 4.9%, suggesting that the global 747 fleet still has many years of active service ahead of it. However, 15 airports that welcomed at least one weekly 747 service last November are now no longer receiving flights from this aircraft type. These include Colombo, Copenhagen, Perth and Stockholm Arlanda.

Having looked at the 747 and A380 it seems only fair to take a quick look to see which are the leading airports around the world for the other major widebody aircraft currently operating.

The top five airports for the A330 are all in Asia, while Hong Kong and London Heathrow both make the top five for three of these five aircraft types, and Tokyo Haneda makes it into the top two for both of Boeing’s long-haul twinjets. Incidentally, for anyone who is a fan of the narrowbody Boeing 757, the top 17 airports for this aircraft type are all in the US, with Reykjavik/Keflavik in Iceland the first non-US airport, at #18.