Texas airports on track to handle over 150m passengers in 2013; over 40 new routes launched so far this year 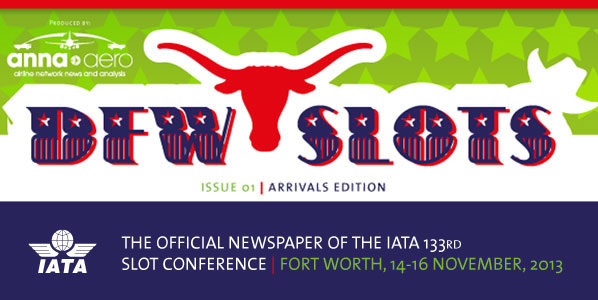 The world’s airline and airport network planners will be in Fort Worth next week to talk slots and route development at IATA’s 133rd Slot Conference. anna.aero will be there too, providing delegates with all the news from the exhibition floor, in our fourth successive year of our show dailies.

Covering an area of almost 700,000 square kilometres, Texas is the second biggest state in the US (after Alaska) and around three times the size of the United Kingdom. It is also the second most populous state with 26 million residents, beaten only by California’s 38 million inhabitants. In terms of airports, Texas is home to not one, but two of the world’s Top 30 busiest airports, with Dallas/Fort Worth International Airport (DFW) ranked eighth, and Houston’s George Bush Intercontinental Airport (IAH) ranked 26th globally in 2012.

The state is also blessed with four other airports, each of which has handled between five and ten million passengers for most of the last decade. Two of these are secondary airports serving the Dallas/Fort Worth and Houston urban areas, with Austin and San Antonio each having a single major airport serving them. Between them these six airports have handled between 114 million and 136 million passengers annually since 1999, peaking in 2007. After seeing passenger numbers drop in 2008 and 2009, demand has been growing in the three years since, and recovered to 134.2 million in 2012. It is possible that 2013 may yet see Texas’ airports set a new record for passenger throughput. 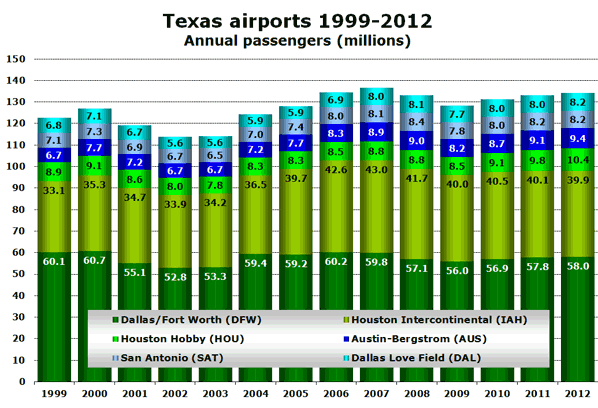 While Dallas/Fort Worth is dominated by American Airlines, and United Airlines is by far the biggest airline at Houston Intercontinental, Southwest is dominant at Dallas Love Field and Houston Hobby, and the leading airline in Austin and San Antonio.

Over 20 airports with scheduled services

Apart from these six largest airports, Texas has several other airports handling over 800,000 annual passengers including Amarillo, El Paso, Lubbock and Midland/Odessa. In addition, there are several other airports with commercial scheduled services (such as Corpus Christi, Harlingen, Laredo and McAllen), resulting in Texas having over 20 airports with regular scheduled flights. All those airports combined handled around 145 million passengers last year, roughly the same number as processed by all Italian airports.

Not surprisingly for a state the size of Texas, there are many extremely busy air routes connecting the various major cities in Texas. With Houston and the Dallas/Fort Worth region each being served by two airports, it is no great surprise, that on the whole airlines have avoided going head-to-head with each other on intra-Texas routes. Of the top 12 services in terms of weekly seat capacity in November, American Airlines and Southwest Airlines are each represented five times, while United Airlines makes two appearances. 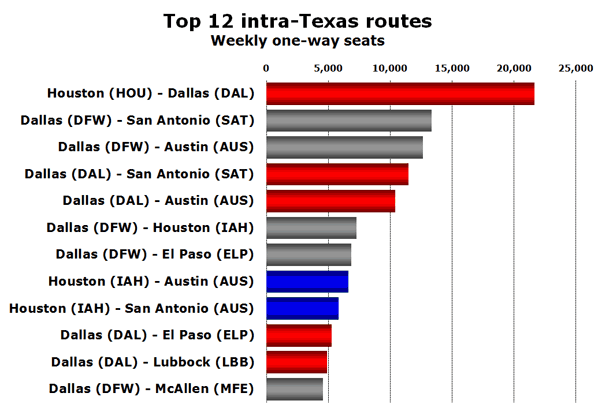 It is worth remembering that Southwest Airlines’ origins are in Texas, with its corporate headquarters still located at Dallas Love Field Airport. Its original plan was basically to operate a triangular network, connecting the cities of Dallas, Houston and San Antonio with regular low-cost services. The airline’s difficult early days are well documented, with the airline having to wait almost four years between being founded (in March 1967), and its first flight (on 18 June 1971).

Analysis of schedule data for August 2013 (a peak summer month) reveals that American Airlines accounts for almost 40% of all scheduled seat capacity at airports across Texas, thanks to its operations at Dallas/Fort Worth. United with just over 24% (thanks to its Houston base) manages to beat Southwest (with just under 22%), resulting in these three carriers accounting for around 85% of all scheduled seat capacity in Texas this summer. August seat capacity was up an estimated 4% on the same period last year, while the number of flights had increased by 3%. The only other carriers with more than 1% of the market are Delta Air Lines (almost 5%), US Airways (almost 3%) and Spirit Airlines (with over 2%).

Spirit’s rapidly expanding base at DFW

Spirit Airlines only commenced operations from DFW in May 2011, but has grown rapidly to serve 25 destinations non-stop from the airport, including two in Mexico (Cancun and Toluca). However, with only one route (Las Vegas) served more than twice-daily, the airline is unlikely to appeal to American’s corporate and business customers. Texas is clearly a focus for Spirit since it also introduced service to Houston Intercontinental last September, and has now built up a network of seven destinations from the airport, again, with mostly daily flights.

New non-stop services to Beijing, Istanbul, Lima and Seoul in 2013

American and United both have extensive international networks from DFW and IAH respectively, including many non-stop services to Asia, Europe and Latin America. Several European carriers also serve the Texas market including Air France, British Airways and Lufthansa, while Emirates serves both DFW and IAH, and Qatar Airways serves IAH. Since the beginning of the year Texas has welcomed Air China (Beijing to Houston) and Turkish Airlines (Istanbul to Houston), while American has launched new long-haul service to Lima and Seoul Incheon. Next March will see the arrival of the first ever regular long-haul flights to Austin, when British Airways launches direct flights from London Heathrow using its Boeing 787 Dreamliners.

Over 40 new services already launched in 2013

According to anna.aero’s research Texas airport have seen the launch of over 40 new services already so far this year, a figure that may surpass 50 by the end of December. Dallas/Fort Worth leads the way so far with 19 new services, followed by Houston Intercontinental with nine, Houston Hobby with seven, and Austin-Bergstrom International Airport, with five.