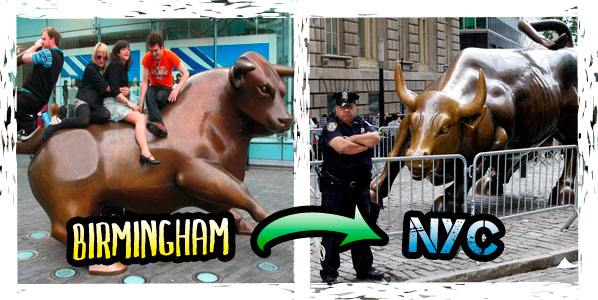 Bull market: The new Biman service will allow citizens of these two great mercantile cities to compare and contrast their hallmark bronze bull sculptures and see for themselves that Laurence Broderick's Birmingham Bullring Bull does tend to look a little bit friendlier and cow-like than Arturo Di Modica's Charging Bull in Wall Street. (anna.aero is not aware of any iconic bull-themed statues in Dhaka.)

From April 2014, anna.aero can exclusively reveal that Biman Bangladesh Airlines is planning to launch twice-weekly 777-300 operations from its Dhaka hub to Birmingham in the UK, before transiting on to New York JFK. This announcement is significant for several reasons:

Commenting on the second point, the Biman’s Managing Director and CEO Kevin Steele stated: “The option [serving Birmingham] is better because a greater number of Bangladeshis are living in Birmingham than in Manchester and the Birmingham offer is more commercially viable than Manchester Airport’s offer.”

Biman currently flies the only direct services between the UK and Bangladesh, offering three weekly services split between Dhaka (weekly) and Sylhet (twice-weekly) from Heathrow, with much of the existing market being catered for by the likes of the MEB3 (Emirates, Etihad Airways and Qatar Airways) via their respective hubs. On that basis, an additional twice-weekly operation from Birmingham will see weekly seats to Bangladesh grow from 936 (based on Innovata / Diio Mi schedules for 7-13 November) to 1,774 (Biman’s 777-300s are fitted with 419 seats, according to aircraft configuration figures obtained from planespotters.net).

The impact of the arrival of carrier in the UK-New York JFK market is going to be less marked, as there is planned to be 145 weekly flights offering over 41,000 seats to the US hub in the average week next April (Innovata / Diio Mi 7-13 April). If New York Newark is considered then weekly flights increases to 246 and weekly seats to over 62,000. 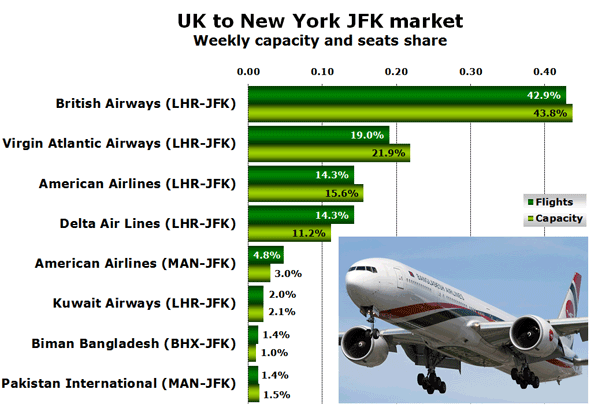 It should be noted that Norwegian will start its own service to New York JFK from London Gatwick on 3 July 2014, to become the fourth UK airport to have services to this particular New York gateway.  Manchester Airport will console itself with the fact that it has daily 757 operations to Charlotte with US Airways starting 22 May (and Air Canada rouge to Toronto five times weekly from 26 June).