The anna.aero Happy 18th Birthday easyJet Song is dedicated to all 139 airports in the easyJet network. (Written, performed and created at The King’s Head, Horley by Ian Hill, Paul Hogan and Richard Jende)

Who remembers the early days of easyJet? Based at unfashionable London Luton Airport (which had seen its fair share of airlines come and go in previous years), it had just two unairline-orange 737-200s and, as the internet was still a minority interest, it had a call centre phone number written big on the side of the aircraft claiming to offer air fares “for the price of a pair of jeans” (£29/$49). It was run by Stelios Haji-Ioannou, a cheerful, casually-dressed British-Greek-Cypriot who looked like an unemployed MSc student. But while his independent family wealth at the time of the easyJet start-up is in no doubt, not many would have laid bets on this entrepreneur succeeding where so many others have failed in taking on the combined might of over 20 European state-owned national carriers to create Europe’s third biggest airline, a mighty FTSE 100 corporation, with a fleet of well over 200 modern Airbus aircraft.

Passenger numbers triple in a decade

With its first revenue flight departing Luton for Glasgow Airport on 10 November 1995, the airline quickly attracted the full gaze of the media by embracing the new phenomenon of “reality TV”, allowing cameras to follow its operations for a regular, and highly popular television series. This showed a cheap airline for all it was – complete with denied boarding, delays, and irrelevant human-interest stories about check-in clerks who probably didn’t even work for easyJet. However, anna.aero is going to cease with the heart-warming irrelevance here: The rest of this analysis will be devoted to the key developments of the airline in terms of its network development in its first 18 years. 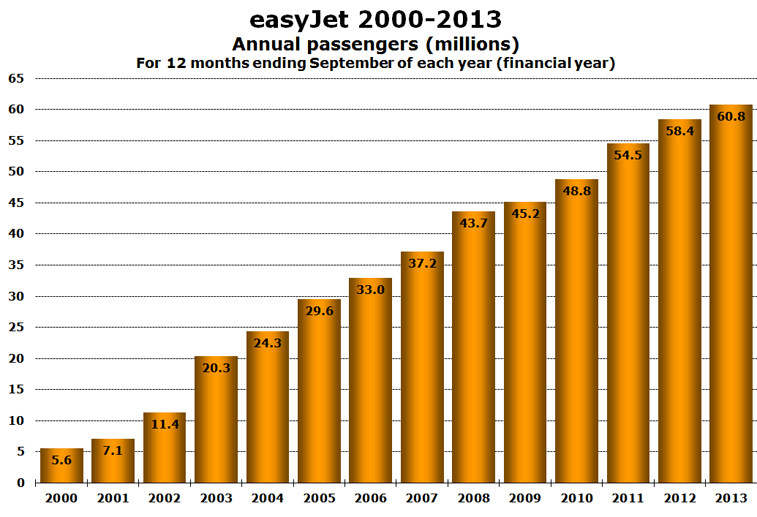 In its latest financial year (ending 30 September 2013) the airline reported passenger numbers of just over 60 million, another new record. As usual the annual load factor was well in excess of 80%. Growth across the airline’s pan-European network has been maintained, even during the long recession which is affecting most of the airline’s biggest markets. The airline reported double-digit growth every year until 2009, after which it has been less than 10%, with the exception of 2011. Along the way easyJet has also grown by acquiring three other airlines:

easyJet currently has 22 bases spread across Europe, with half of them in the UK. A further five bases are in France (Lyon, Nice, Paris CDG, Paris Orly and Toulouse), two are in Italy (Milan Malpensa and Rome Fiumicino), two are in Switzerland (Basel and Geneva), with Berlin Schönefeld and Lisbon being the others. In 18 years easyJet has closed just three bases; those at East Midlands (which it inherited from Go), Dortmund and Madrid. In 2014 Hamburg and Naples will become the airline’s next two bases.

Four of the UK bases are at airports which serve the London region. anna.aero recently looked at how the airline’s presence at London’s airports has evolved in recent years, revealing that while back in 2005 the Gatwick, Luton and Stansted bases were all roughly the same size, eight years on Gatwick dominates, while operations at the other two airports have been cut back. 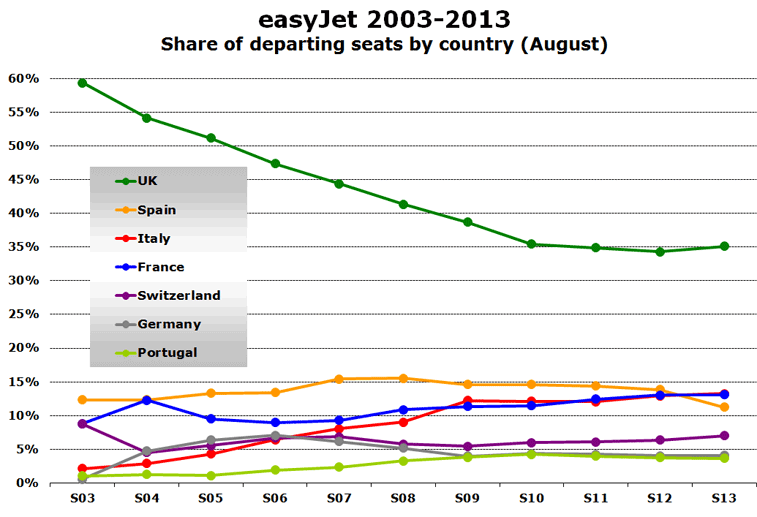 Source: Innovata / Diio Mi for 1-7 August for each year

Analysis of the airline’s number of flights during the first week of August for the last 11 years, shows how the airline has become less UK-centric, with the share of departures from UK airports falling from almost 60% in 2003 to 35% in 2010. Since then the UK share has stabilised and even grown again slightly in 2013.

Spain, which has been the airline’s second biggest country of operation for most of the last decade, has dramatically fallen behind both France and Italy in 2013, partly because of the closure of the Madrid base, and partly because of the Spanish recession (work out for yourself which came first). Conversely, Italy, another poorly performing Mediterranean economy, has seen its share of easyJet flights rising from 2% in 2003, to over 13% in 2013. This is likely to rise further in 2014 with the opening of a new base in Naples.

Around 850 routes launched in 18 years

In August this year easyJet was operating flights on just over 600 airport-pairs, up from over 570 the previous summer. The average weekly frequency on these routes is 7.6 (slightly more than daily), with London Gatwick to Barcelona being the highest frequency route in summer, with 42 weekly departures, an average of six flights per day. In addition, the airline serves a number of routes during the winter period only.

anna.aero’s data elves have been looking at their databases and we believe that in total easyJet has launched around 850 routes in its first 18 years. As with many other LCCs, not all the routes have been a long-term success and many have been withdrawn, in some cases after only a few months, and in other cases after several years, reflecting the changing pattern of demand for certain destinations. At anna.aero we will continue to follow the ‘adult’ development of easyJet with great interest as it develops further bases in mainland Europe, and continues to be one of the leading airlines globally both for new air services, and for setting mould-breaking industry trends in delivery and service technique.