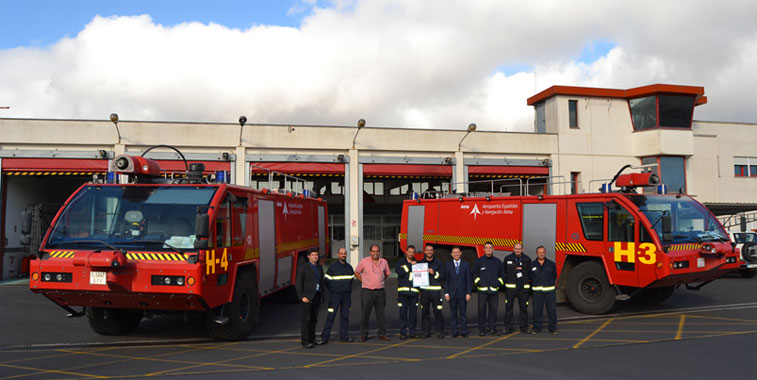 Aena’s Tenerife Norte Airport presentation: Congratulations to last week’s anna.aero Arch of Triumph winners led by Chief Fire Officer Aniano González (seen here in the pink shirt) with his victorious crew. The airport is now on pole position in the 2013 championships with a highest-yet score of 36.2 out of a possible 40.

Munich Airport triumphed with the best Fire Truck Water Arch (FTWA) for a route launch this week with a score of 32 out of a possible 40. Six airport fire departments sent in submissions. Meanwhile, Aena’s Tenerife Norte Airport retains the top spot for the overall “anna.aero Arch of Triumph Champion 2013”. A special guide of how to play appears at the bottom of this article. Keep monitoring! 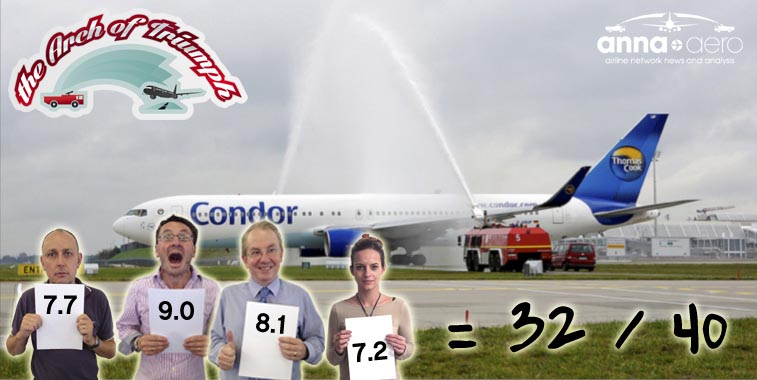 Marc: 7.7 Renowned for their precision, there were high expectations from our German colleagues in Munich when this FTWA dropped into anna.aero’s inbox. Clearly there was a still bit of a hangover from the Oktoberfest, as we have a pretty bland, but efficient FTWA on show here. Next time we expect a bit more Oompah!

Paul: 9.0 I don’t agree at all. This style is called “vom fass” and like the best Bavarian beers it takes years of experience to pour one out. British readers over 50 may recognise this arch as based on the curling smoke from the now-banned “Condor Moment” cigar TV advertisements of the 1970s/80s.

Ralph: 8.1 From this angle the arch reminds me of the famous Gateway Arch in St Louis, designed by the great Finnish architect Eero Saarinen, who also designed the terminal building at Washington Dulles Airport. I also like the fact that despite the angle you can see both trucks.

Magda: 7.2 It seems that the photographer was more of a plane spotter than an arch spotter, but it still looks pretty neat. 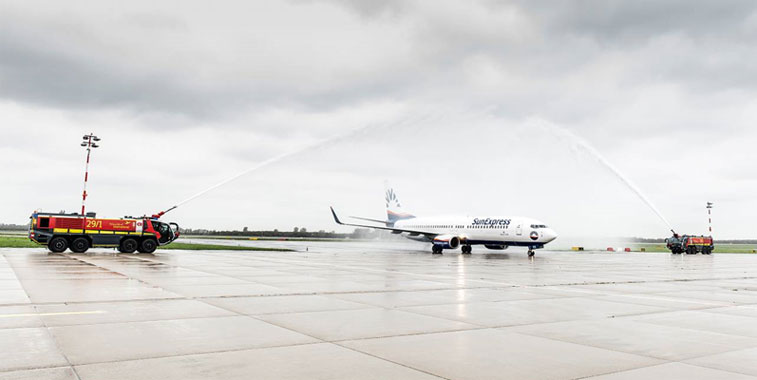 A wet Düsseldorf sendoff for a winter sun route. You can see why the citizens of Düsseldorf will be flocking to use this service. Total score: 30.2

Marc: 8.1 Just a bit more pressure from both tenders and this could have been a world-beater, however the result is an FTWA that is only 90% built. I’ve known a few builders like that in my time…but none of them were German.

Paul: 8.5 Great to see another route launch to Gazipaşa – a new airport in sunny Turkey – and with all that precipitation you can see why the citizens of Düsseldorf will be flocking to use this service.  A top-scoring “leaping dolphin” arch in my opinion.

Ralph: 6.3 An FTWA at a wet airport. Is this a first? Grey sky, grey tarmac, and water that would benefit from a bit of colour. Still, the arch is promising but lacking a ‘keystone’.

Magda: 7.3 Very good – probably even better from a different camera angle. Lovely, colourful fire trucks leave us in no mistake that this is Düsseldorf (as does the rain). 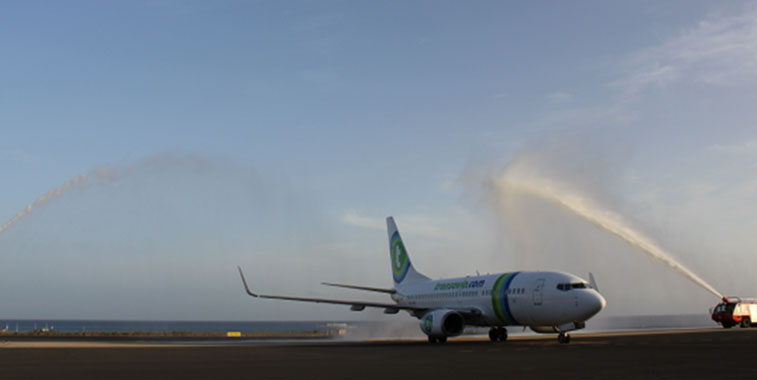 The judges’ disagreement over whether a “Canary” is an arch spoilt the chances of this entry. Total score: 16.4

Marc: 3.4 The Spanish word for arch is ‘arco’ – not that different really. However, it must mean something completely different in Lanzarote – perhaps it means ‘two jets of water randomly fired in the direction of the object’ on that particular Canary Island.

Paul: 7.2 This is another “Canary” – a water arch based on the native bird of these islands. They are much talked about by anna.aero’s ornithologist group on LinkedIn, but we’re getting one every week now.

Ralph: 2.3 Bad timing? Insufficient water pressure? Communications issue? Who knows, but one thing’s for sure. This isn’t an arch.

Magda: 3.5 Not a great show this. Not really an arch either. 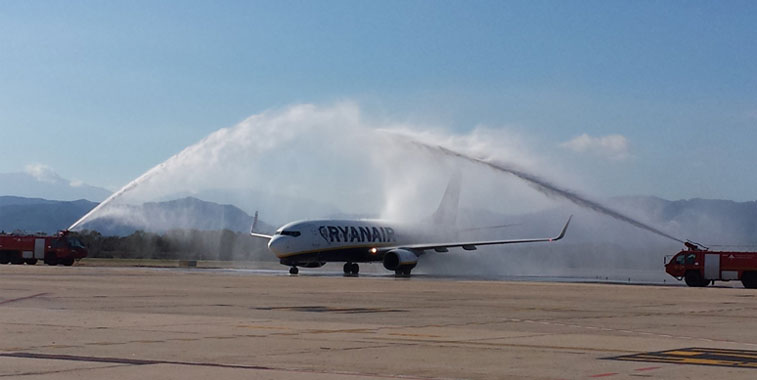 Critical verdict: “The alignment is slightly out and there’s a bit too much of a ‘wall of water’ going on.” Total score: 26.6

Marc: 5.9 Mix of styles going on here…with ‘Dukes of Hazard’ being mixed with an ‘Ear-Wash’. The fire crews in Girona need to be taking a look at the near-excellence crafted by their colleagues in Tenerife Norte for their next route launch.

Paul: 7.5 I want to give encouragement to Rabat. The Moroccan capital was recently awarded second place in “Top Travel Destinations of 2013.” Sadly Girona won’t win the anna.aero prize this week either.

Ralph: 5.8 Well it’s almost a good arch, and you can see that the fuselage is getting a good soaking, but the alignment is slightly out and there’s a bit too much of a ‘wall of water’ going on here.

Magda: 7.4 Very dramatic display, there’s some real action going on there. All I need is to hear the Ryanair arrival trumpets. 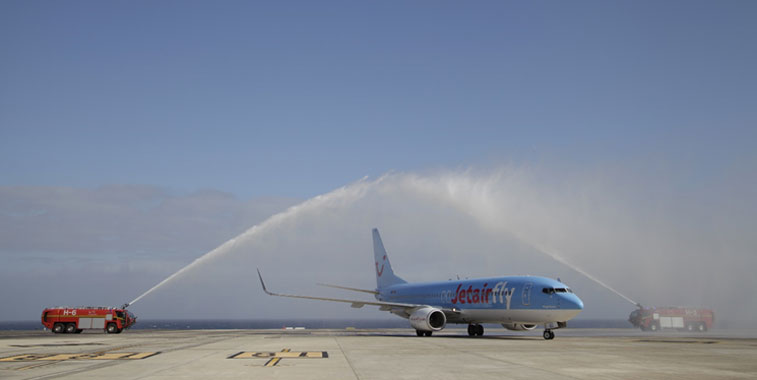 Marc: 8.2 Third week in row that Fuerteventura has sent us an FTWA. In quieter route launch weeks, a score of 25.5 (two weeks ago for TUIfly’s Nuremburg launch) might have taken the weekly award, but it only managed a #3 spot. This week could be different, as this is a top-quality FTWA, with points being deducted for the wind’s interference on the right-hand half of the arch.

Paul: 8.1 Just look at that unobstructed Atlantic Ocean in the background – the wind comes right up from Brazil just to ruin these arches. In order to compensate there’s some over-thrusting going on; 0.5 also deducted for spray.

Ralph: 6.4 Lovely blue sky makes a good advertisement as to why you should fly to the Canary Islands at this time of year. Quite like the minimalism: a plane, two trucks, an apron, some sea and the sky.

Magda: 5.9 A vast improvement on last week’s performance, I believe the wind eased down in Fuerteventura. Still, some mist to work on. 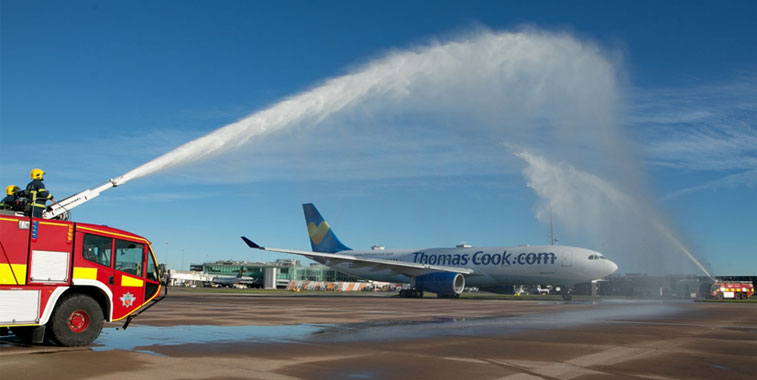 A first-ever “Arch of Triumph” entry from Manchester. Er, no problems there then… Total score: 20.0

Marc: 3.3 First offering from a M.A.G airport in the 2013 competition…and let’s just say it shows. All sorts of problems with this FTWA on a day which they should have made the most of in Manchester — as it wasn’t raining!

Paul: 7.5  I’m not stupid. Manchester’s CCO, Ken O’Toole, will tell his firefighters where I live if I don’t score this highly. I have also visited the fire station and seen how hairy they are for myself – in every sense. A lovely arch guys. Terrific.

Ralph: 4.7 You can almost hear the guys in the left hand truck shouting “left a bit, down a bit” like some contestants on legendary 1970s UK TV series ‘The Golden Shot’. In another 10 seconds it might have been great.

Magda: 4.5 This shouldn’t have scored more than three points, but as it was Manchester’s first submission, I’m adding 1.5 as a little encouragement.