Ryanair reveals nine new routes from Dublin Airport; Bucharest makes first ever appearance, while Basel and Prague are back in favour Irish tourism's three ‘wiser’ men, including the Prime Minister, Enda Kenny, appear at the Aviva Stadium to celebrate Ryanair's plans to grow its traffic by one million passengers 2014/2015. Nine new routes were announced including the airline's first ever flights from any base to Bucharest Otopeni Airport.

Responding to the Irish government’s decision to scrap the €3 per passenger air travel tax at all Irish airports from next April, Ryanair has given more details about how it plans to generate an extra one million annual passengers through Irish airports. Some 700,000 extra Ryanair passengers are expected annually through Dublin Airport following the revelation on Thursday that the airline will add nine new routes starting in April, as well as increasing frequencies on a further eight routes, six of which are to airports in the UK. Ryanair’s annual passenger numbers at Dublin are therefore expected to rise by just over 9% from 7.55 million in 2013/14 to 8.25 million in 2014/15.

Another 300,000 passengers are expected to come from the airline’s recent announcement that it will be adding eight new routes next April from Shannon Airport, increasing the number of Ryanair destinations at that airport from 10 to 18, and increasing passenger numbers by an expected 70%.

The nine new routes from Dublin see Ryanair return to Basel and Prague after several years hiatus, while Chania and Marrakech become the airline’s first destinations in Greece and Morocco from Dublin. In addition, the Romanian capital Bucharest is a totally new destination for the airline, although it already operates flights to Constanta and Targu Mures from some of its other bases across Europe. Apart from Basel and Prague, the Almeria route has also been served before by Ryanair from Dublin.

Back up to over 80 destinations from Dublin

Between 2004 and 2007 Ryanair more than trebled the number of destinations served from its Dublin base, during the peak summer month of August, from 24 to 74. The following year the network peaked at 84 destinations, since when it has hovered around the 70 mark. Between August 2008 and August 2012, the number of weekly departures operated by Ryanair from Dublin fell by 28%, from 735 to just 526. Next summer will see Ryanair’s Dublin network expand to over 80 destinations once again, but the number of weekly flights will still be nowhere near the airline’s 2008 peak. 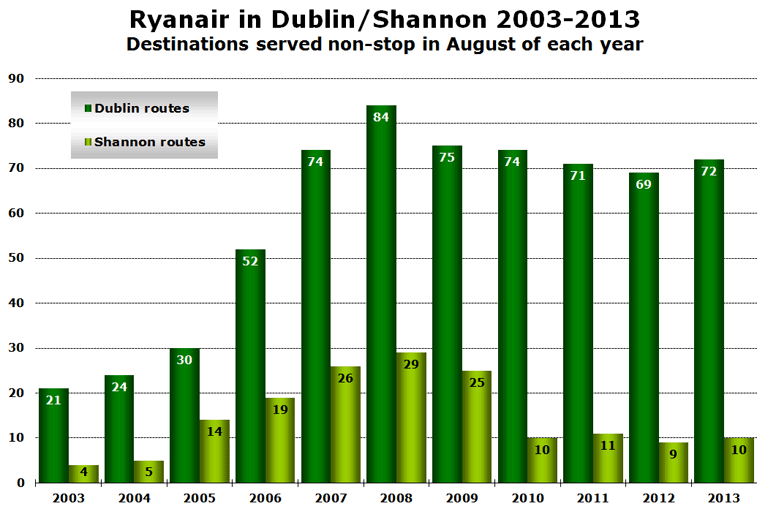 Source: Innovata / Diio Mi for first week of August in each year. 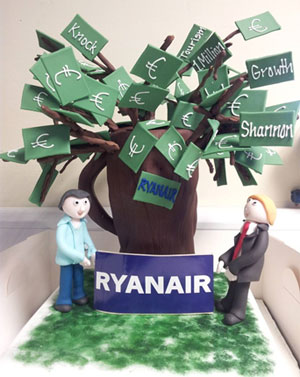 As we all know: New routes and growth are also good for cakes.

Ryanair’s Michael O’Leary said: “Ryanair is pleased to deliver nine new European routes which will create over 1,000 new jobs in direct response to the government’s initiative to scrap the €3 air travel tax. A critical component will be 100 extra weekly flights into Dublin from Britain, which will reverse the recent tourism declines in UK visitors. We are also proud to confirm that we will create over 300 new direct jobs in Ryanair in Ireland in 2014 to crew our new based aircraft.”

daa’s Kevin Toland said: “Daa is pleased by Ryanair’s decision to accelerate its growth at Dublin Airport in response to the government’s decision on the air travel tax and the attractive suite of incentives we offer to airlines launching new services or increasing passenger numbers. This year represents the third successive year of growth at Dublin Airport on both short and long haul services, which is very positive for tourism and the overall economy, and today’s announcement provides a strong platform for continuation of this trend.”