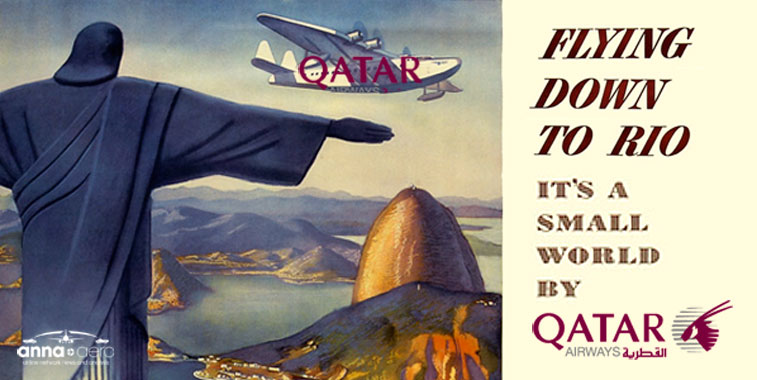 anna.aero has learnt that Rio de Janeiro will also be served by Qatar Airways next year, along with Amsterdam and Prague. Rio comes just in time for next year’s World Cup in Brazil – Qatar hosts the World Cup in 2022. (Apologies to 1930s Pan Am.)

Having announced its plans to serve Edinburgh earlier today, anna.aero can exclusively reveal that Qatar Airways is also looking to add three more destinations to its route portfolio next year: Prague and Amsterdam in Europe and also Rio de Janeiro — no doubt just in time for next year’s World Cup in Brazil (Doha is set to be the World Cup city in 2022).

Launching on 28 May with a five times weekly 787 service (Scotland’s first scheduled Dreamliner service), Edinburgh is perhaps the most significant launch as its represents the first of the MEB3 airlines (Middle East Big 3 airlines = Emirates, Etihad Airways and Qatar Airways) to make the decision to start services at Scotland’s capital city (Emirates flies double-daily with 777-300s into Glasgow). And when the carrier launches passenger flights to Amsterdam, it will have completed the MEB3 set — with all three airlines then offering services.

In terms of other operations to these four new airports which have been started in the last two years, Emirates started its Rio de Janeiro operation in January 2012, while transavia.com launched an Amsterdam to Dubai service (initially twice-weekly) in October 2012. In addition, Etihad Airways launched its daily Amsterdam service just six months ago in May 2013.

Qatar Airways’ planned arrival in Prague completes a good news week for the Czech capital, which has seen the return of Ryanair next April from Dublin, as well as Air Transat starting weekly operations from Toronto next June. Equally, at Edinburgh, the airport will receive a huge long-haul boost next summer with the Qatar Airways service starting in the same week as United Airlines’ seasonal five times weekly 757 service to Chicago O’Hare (launching 23 May), as well as the recently announced US Airways seasonal six times weekly 757 route to Philadelphia (also launching 23 May).

Meanwhile, when Qatar Airways adds these three new destinations to its existing new route list over the next six months, the carrier will be close to serving 130 cities from its Doha hub. According to anna.aero’s New Route Database these launches include: