Considered to be one of the world’s oldest international airports, Bangkok Don Mueang was officially opened as a Royal Thai Air Force facility in March 1914; the first commercial service was inaugurated here by KLM as early as 1924. Following the opening of Bangkok’s Suvarnabhumi Airport, Don Mueang closed down for business and was only reopened in 2012 after years of renovation. Together with the upgrade of facilities came another change – in just over a year, the airport has become Bangkok’s new low-cost hub with Nok Air and The AirAsia Group taking up most of its capacity in November 2013.

Suvarnabhumi Airport, which was designed to handle 45 million passengers per year, processed more than 48 million in 2011 and according to forecasts at the time, it was to surpass the 50 million threshold in 2012 (it actually handled 53 million). As growing congestion at Bangkok’s main airport started to become an issue, the country’s government decided to end the one airport policy by encouraging low-cost carriers to make the switch to Don Mueang. 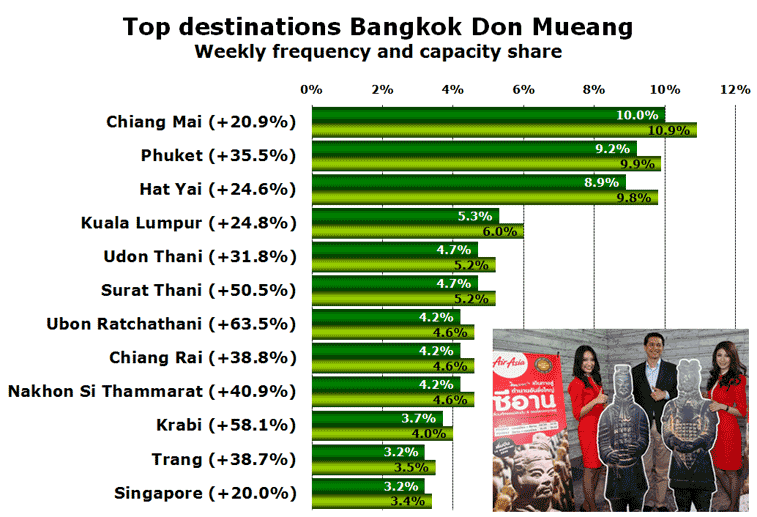 As a result, Nok Air became the first airline to swap Suvarnabhumi for Don Mueang moving its operations there in March 2012. Thai AirAsia, together with its sister companies – AirAsia and AirAsia Indonesia, followed suit at the end of September of the same year. The airport’s overall scheduled capacity, as measured in weekly seats, is up 34.6% in November 2013 compared to the same month of 2012.

The AirAsia Group accounts for 65% of capacity

While Nok Air was the first to take its estimated four million annual passengers to Bangkok Don Mueang, the entry of The AirAsia Group to the airport changed the dynamics dramatically. With an estimated eight million passengers carried in 2012 to and from Bangkok Don Mueang, Thai AirAsia, AirAsia and AirAsia Indonesia have a combined market share of nearly 65% in terms of weekly seats offered this November.

However, over the same period of time, Nok Air was the airport’s fastest-growing airline and noted a 57.5% increase of weekly seats. The carrier now offers a total of 522 weekly frequencies across a network of 21 destinations, including one international. The latter, Yangon, was launched earlier this month and is operated with four weekly frequencies in competition with Thai AirAsia’s thrice-daily services.

Domestic operations prevail at Bangkok Don Mueang, making up for 72.2% of the airport’s weekly frequencies and slightly less (69.4%) of seats. In fact, nine out of the airport’s Top 10 destinations involve routes within Thailand. This includes the busiest route from Don Mueang, to Chiang Mai, which is served by Nok Air (89 weekly flights) and Thai AirAsia (49). Orient Thai Airlines withdrew from this market in the course of last year, having previously offered twice-daily frequencies between Bangkok Don Mueang and Chiang Mai. The latest addition to the airport’s domestic route network is Nok Air’s thrice-weekly service to Hua Hin, which launched this week.