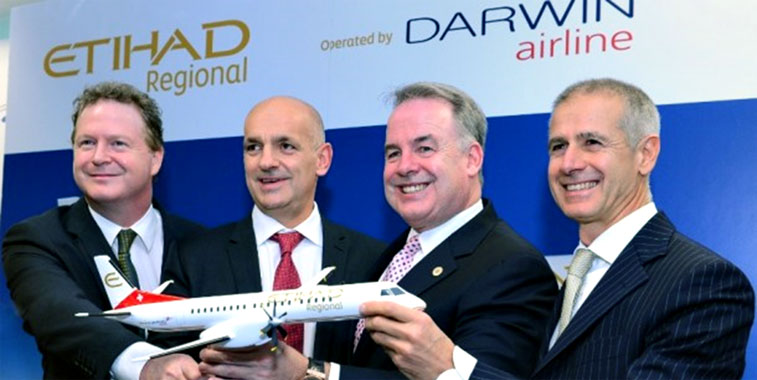 Like the proverbial magpie, Etihad Airways has been attracted to the shiny thing in the room again, taking back to its nest in Abu Dhabi a 33.3% stake in another carrier, this time Lugano-based Darwin Airline. The major difference from its other share acquisitions (Aer Lingus, airberlin, Air Serbia, Air Seychelles, Virgin Australia), is that it plans to create a new airline brand within Europe, to be known as Etihad Regional. This announcement comes at the same time as it has closed the transaction for a 24% stake in Jet Airways, with all requisite Indian regulatory approvals having been obtained by 12 November.

Returning to Etihad Regional, by mid-2014, this new carrier will have added 21 new routes and 18 new destinations to its existing network of 21 destinations in Europe, which currently utilises a 10 aircraft fleet of Saab 2000s. Its expanded network will then include six European gateways served by Etihad — Geneva, Amsterdam, Paris, Düsseldorf, Belgrade and from 1 June 2014, Zurich.

However, the intention of this purchase is not just about feed to the mothership, but Etihad Regional will also be able to connect to the network of airberlin, through new and existing routes to Berlin, Düsseldorf and Zurich, as well as the smaller network of Air Serbia, through its Belgrade hub.

Of the 21 routes announced, over half (11) will have direct competition, with the incumbents ranging from fellow regional airlines (TWINJET, InterSky), to LCCs (easyJet) and legacy carriers (Alitalia, British Airways, Lufthansa). This will therefore mean a variety of market strategies will be required in order to take-on this varied competition. Both easyJet and SWISS will provide the biggest competition, as they both fly on three of Etihad Regional’s proposed routes.

Of the 10 routes where Etihad Regional will face no direct competition, four of the city pairs have been served before (according to Innovata / Diio Mi data) in the last five years. The most recent was the Zurich to Verona route, operated by Air Dolomiti with its ATR 72s between September 2012 and May 2013, while  the now-defunct Austrian regional airline Robin Hood Aviation flew between Zurich and Linz with its Saab 340s in period of May 2010 until August 2011. Another deceased regional carrier, Poland’s Jet Air, flew the remaining two previously operated routes, linking Berlin Tegel with Wroclaw (November 2011 – April 2012) and Poznan (December 2008 – January 2009) using its ATR 42s and Jetstream 32s respectively.

The Air Service Agreement between the UAE and Germany currently allows only four points to be served in Germany – namely Munich, Frankfurt, Düsseldorf and Hamburg – all of which are served by Emirates, while the first three destinations only are served by Etihad. Notably Berlin is not on this list, a focal point for Etihad Regional, however Etihad gets around this by having the Abu Dhabi route flown by airberlin with its code on the flight. Looking at Etihad’s current schedules at its six European gateways to be served by Etihad Regional, plus Berlin, any connecting flights would have to hit the following timings:

Apart from some long turnarounds (eight hours in Amsterdam, seven hours 50 minutes in Paris CDG) and two arrival times in Belgrade but only one departure time, the Etihad schedules seems to suggest that its early morning arrivals into Europe should neatly connect onto the first wave of Etihad Regional departures in the morning. Passengers will then use the morning arrival back into places like Zurich from Graz or Linz to connect with lunchtime departures from Europe. Evening business returns (1800-2000) into points like Amsterdam and Paris CDG will then be able to feed Etihad’s evening departures to Abu Dhabi in these locations.

The question remains whether Rome Fiumicino will be added to the Etihad network in the near future, as it is the only one of the focal points announced that is currently not a European gateway for the airline. Rest assured that if anna.aero finds out, you will be the first to know.