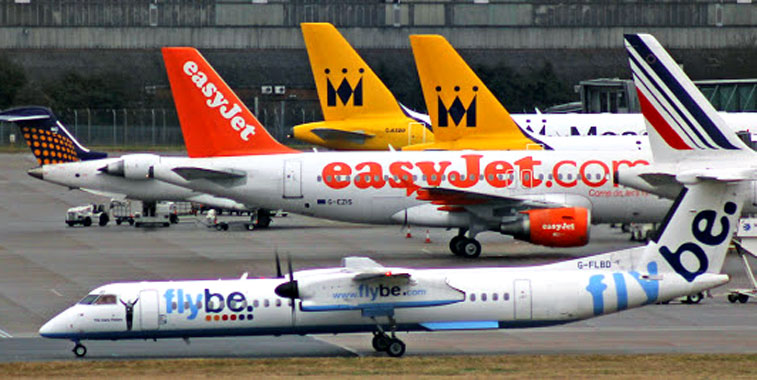 Which routes will go? Of the six bases to be dropped, the flybe routes from Aberdeen, Guernsey and Jersey appear to perform well, based on comparison of fare data and sector length. Meanwhile, flybe is completely pulling out of London Gatwick in March 2014, passing its slots to easyJet. (Yes, we know this is a photo of BHX; please don’t write in.)

UK regional airline flybe, currently undergoing a major management shake-up, recently announced that it intends to close its bases at six UK airports; Aberdeen, Guernsey, Jersey, Inverness, Isle of Man and Newcastle. It should be stressed that this does not mean the end of flybe services to these airports, rather that aircraft, cabin and flight crew will no longer be based at these airports.

A recent analysis by Aviation Economics, of the average one-way fare at the airline’s busiest airports, came up with a ranking that had Paris CDG at the top (with an estimated average one-way fare of £103), and Isle Of Man at the bottom (£61). One of the key things that influences average fare is average sector length, so anna.aero has combined this fare data with our own estimates of average sector length (based on schedule data for June 2013) to produce a graph that plots these two variables against each other. 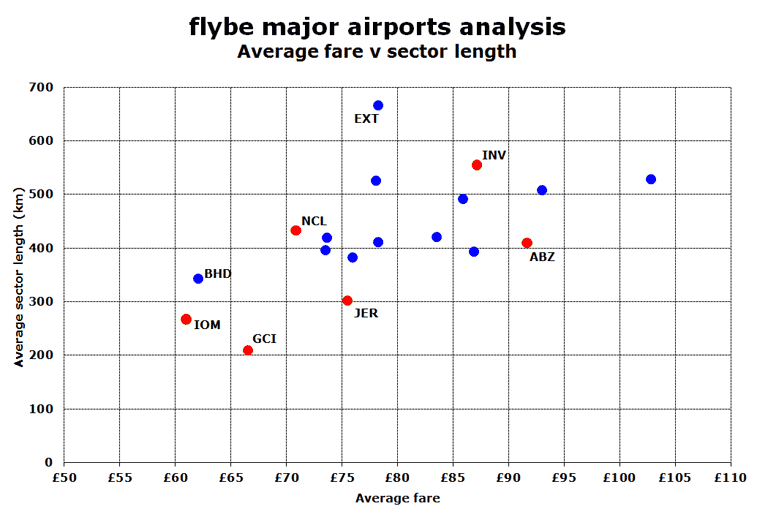 Ideally, an airline would like a high average fare for a short sector length, as cost usually goes up with sector length (if only because of fuel costs). Of the six bases to be dropped, Aberdeen, Guernsey and Jersey would appear to be performing reasonably well based purely on this comparison of fare data and sector length. It may be that other costs associated with these bases are resulting in unacceptable base unprofitability. However, data for the operations from Inverness, Isle Of Man and Newcastle suggest that the average fares for routes from these airports are not as high as they should be, taking into account average sector length.

According to the airline, the biggest staff cuts will be in Belfast City and at the airport’s headquarters in Exeter. These two airports are also highlighted in the above graph, and both are clearly suffering from average fares that are significantly lower than they should be, given the average sector length. This suggests that several routes are likely to be dropped from these airports. The airline’s recent half-yearly results presentation revealed that even after two phases of business rationalisation, 61 routes were not covering their direct operating costs (DOCs), plus crew costs and aircraft costs.

How many of Jersey’s 20 routes will survive?

So which routes might be vulnerable at the six bases the airport intends to close? The following table summarises the routes flown this summer from these airports by flybe (not including the routes operated on flybe’s behalf by Loganair). It should be noted that flybe is pulling out of London Gatwick at the end of March 2014, passing on its slot portfolio to easyJet. It will be interesting to see how many more of these routes are no longer operating at the end of next summer, and which new services may be added.