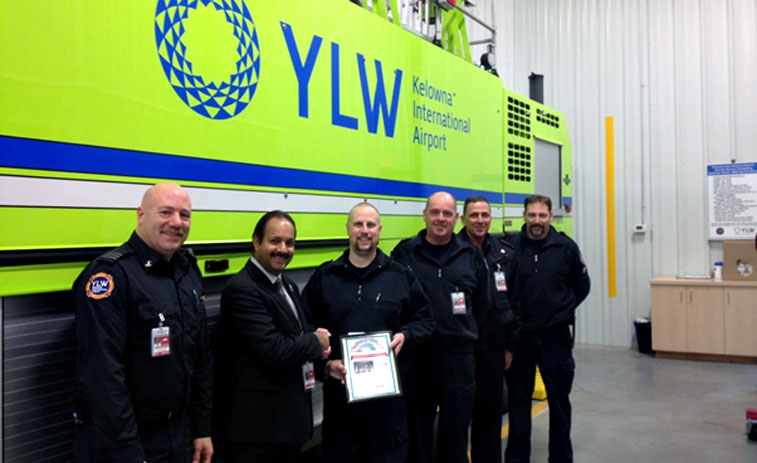 Winning the double: Kelowna Airport wins both the anna.aero Route of the Week and the Arch of Triumph prize. Airport Director Sam Samaddar presents the Arch of Triumph to “D” Crew on behalf of YLW’s Airport Operations Specialists/Firefighter team. “We are extremely proud to be named for both anna.aero awards this week,” said Samaddar. “A successful new route launch involves developing strong partnerships between the airline, our two airports (YLW & YXC) and the Okanagan and Kootenay regions this new route will serve – we have established a great team here!”

Kelowna Airport wins this week’s anna.aero “Arch of Triumph” for best Fire Truck Water Arch (FTWA) for the Pacific Coastal Airlines Cranbrook to Kelowna route launch. Kelowna scored 25 out of a possible 40, beating the entry from George Airport in South Africa in a two-horse race. Aena’s Tenerife Norte Airport retains the top spot for the overall “anna.aero Arch of Triumph Champion 2013”. A guide of how to play “Arch of Triumph” appears at the end of this article, keep monitoring! 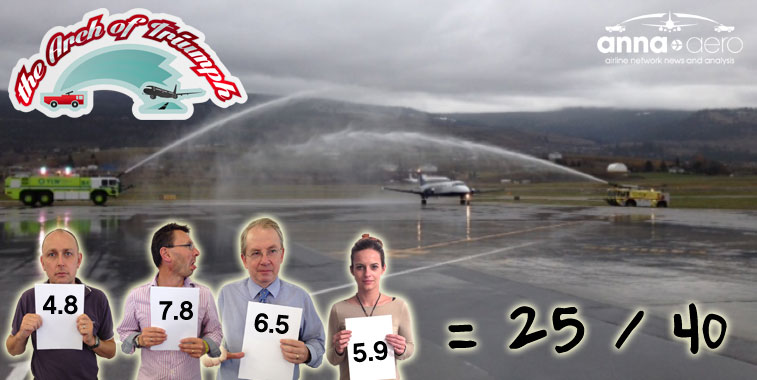 We applaud the fact that Kelowna Airport made all this effort. In fact they also won Route of the Week in recognition of the marketing effort put into the Pacific Coastal Airlines launch.

Marc: 4.8 Failure to take into account topographical features of the environment can lead to poor FTWAs. Classic example of this here from Kelowna, resulting in a “Gangnam Style” arch which could have been so easily avoided.

Paul: 7.8 Be fair, it’s not easy to do an arch for these size planes – a Beechcraft 1900 I think – I’m not good at aircraft without hot galleys. But this fire truck water arch marked a tremendous effort of local support and civic pride for this new route (just read the report by our colleague Arne Petryshen, from the Cranbrook Daily Townsman). I, for one, am going to applaud this salute!

Ralph: 6.5 I know it’s not a great arch, but this is a relatively small airport (just over one million passengers per annum), and the two differently coloured fire trucks probably have different capabilities, but I like the fact they made the effort, even in the rain, and we get a nice bit of Canadian mountainside in the background.

Magda: 5.9 I kind of like the South Korean pop culture influences here, even though the arch is far from ideal. 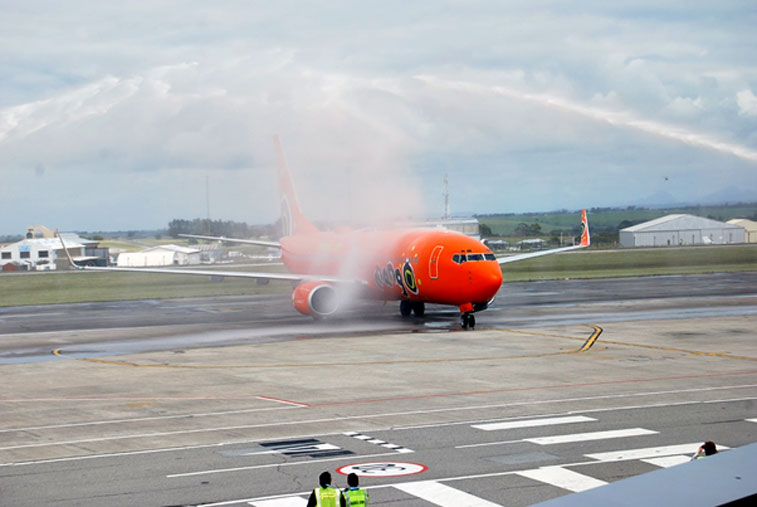 Trucking mystery: Where are the tenders? For all we know this could be the airport groundsmen with a couple of powerful Kärchers.

Marc: 6.4 Call me a traditionalist (we have been doing this for 10 weeks now!!) but I do like to see some equipment attached to the end of my FTWAs (Fire Truck Water Arch). For all we know this couple be the airport groundsmen with a couple of powerful Kärchers (other hose manufacturers are available). Which is a shame really, as the arch itself isn’t that bad.

Paul: 5.1 If I didn’t know better I’d say that the starboard CFM56 engine has a radiator leak. George’s firefighters are demonstrating all the hallmarks of executing a brilliant arch ruined by the Mango pilot’s untimely reverse-thrust manoeuvre. The marshallers in the foreground are wisely standing out of ingestion range; any penguins which took the opportunity to bask in the spray would not have been so fortunate.

Ralph: 4.5 That’s a very soggy looking mango. The lack of visible fire truck equipment obviously counts against this effort, but it’s nice to see an orange aircraft that isn’t easyJet!

Magda: 5.2 I’m sure it was a fine arch. Unfortunately, the photographer obviously didn’t have a wider lens at hand to show all its glory. 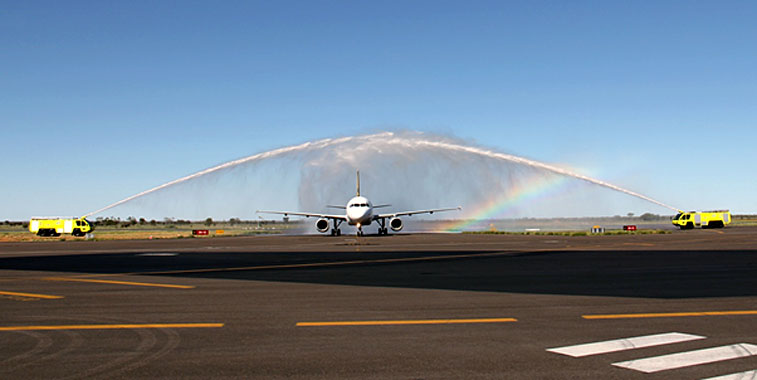 Airservices Australia Rescue and Fire Fighting (ARFF) has submitted this Fire Truck Water Arch from 9 April this year saluting the inaugural Tiger Airways Sydney-Alice Springs service (previously Tiger Airways had only flown to Alice from Melbourne only). We’re sorry ARFF, we can’t enter this as we only invented “The Arch of Triumph” competition in August. But we’re delighted to share the image with the rest of the world, a style of arch known by the local ARFF crew as an “Alice Spring”. As we all know the Australians are easily the most competitive and keenest sports-people in the world – and they’ve even been known to win things from time-to-time. Consequently, anna.aero is closely observing ARFF as a hotly-tipped contender chasing this year’s overall “2013 Arch of Triumph Prize.”