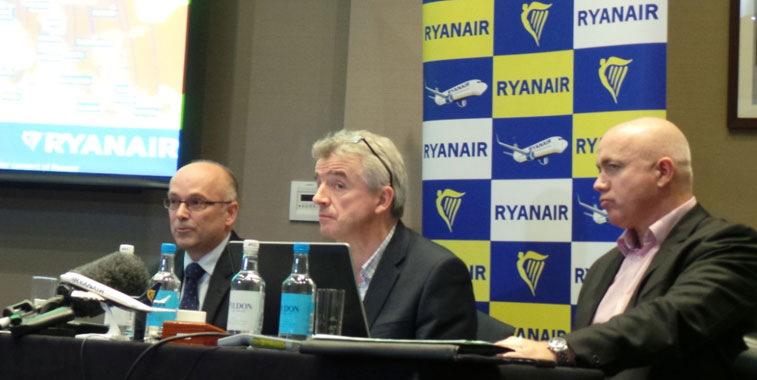 Ryanair’s CEO Michael O’Leary is flanked by Charlie Cornish, CEO of M.A.G. (left) and David O’Brien, Ryanair Director of Flight & Ground Operations (right) during the airline’s latest announcement of its expansion plans at London Stansted Airport. Next summer will see the Irish LCC offering flights to over 120 destinations from its biggest base, though the number of weekly departures is still likely to be less than it flew at the same airport in 2007.

After last week’s announcement stating that it would add nine new routes from its home base in Dublin next year, Ryanair has revealed plans to add 12 new destinations to its largest base at London Stansted. A further 17 destinations will see an increase in frequency compared with this summer. Ryanair estimates that this will add some 1.3 million passengers to Stansted’s annual throughput. The 12 new destinations for next summer are Basel, Bordeaux, Brive, Bucharest, Comiso, Dortmund, Lisbon, Osijek, Podgorica, Prague, Rabat and Skelleftea. Of these, only Basel has previously been served by Ryanair from Stansted, while only Prague faces direct competition from easyJet’s daily flight. Some of these Stansted routes had already been announced and will launch before next April; Dortmund and Lisbon (both 26 November 2013), Rabat (5 February 2014) and Bordeaux (6 February 2014).

Last week’s Dublin announcement confirmed the return of Basel and Prague to Ryanair’s network, and the addition of Bucharest. This week’s news sees the return of Osijek in Croatia to the airline’s network (it was previously served from Frankfurt Hahn), while Brive, Podgorica and Skelleftea get their second Ryanair service.

Well over 120 destinations on offer from London Stansted next summer

During the last decade Ryanair has increased the number of destinations served from Stansted from 65 in 2003 to 114 in 2013. However, the average weekly frequency of each route has fallen in that time from almost 15 flights per week (just over twice-daily), to just under eight flights per week (just over once-daily). As a result, the number of weekly departures operated in August has actually fallen from almost 970 in 2003 to just under 900 in 2013. The number of weekly departures peaked in 2007 at around 1,080. These new routes and frequency increases should push Ryanair back over the 1,000 weekly departures mark at the airport. 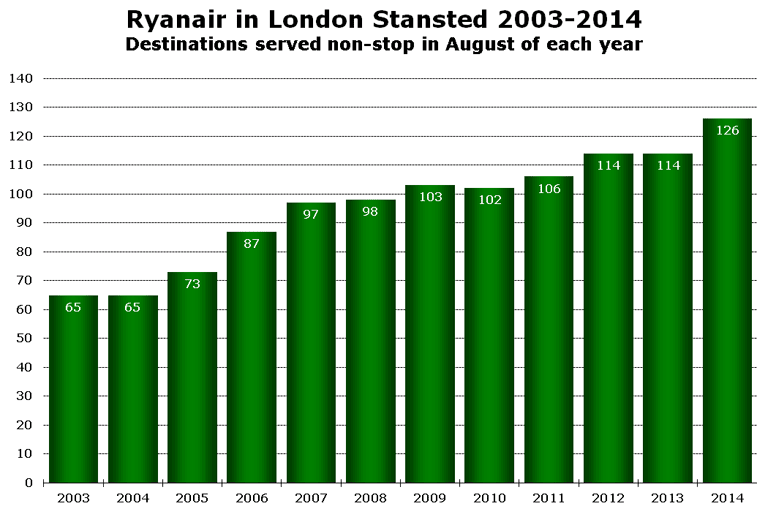 Source: Innovata / Diio Mi for first week of August in each year.

M.A.G.’s CEO Charlie Cornish said: “Today’s announcement by Ryanair is fantastic news for Stansted, the region and the passengers who rely on the airport to provide a connection to and from all parts of Europe. The new destinations and increase in flights on key routes will offer passengers and businesses even more choice at great value and build on the strength of Ryanair’s extensive network at Stansted, the airline’s largest base in Europe. Ryanair is an important and valued customer for Stansted and M.A.G. We’re delighted to support the airline’s expansion plans for next summer with this announcement coming hot on the heels of our joint 10-year growth agreement. M.A.G acquired Stansted to unlock its full potential and return the airport to rapid and sustained growth by offering great value to airlines and better services and facilities to passengers. Today’s announcement, together with the excellent progress we are making with our £80m investment in the terminal, is further evidence we are succeeding in transforming Stansted under our ownership.”