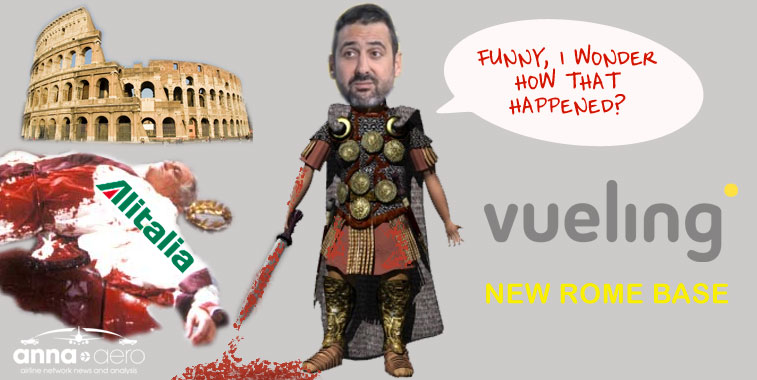 Alitalia will face the biggest challenge from Vueling’s ‘massive’ new base. easyJet will also feel the heat of increased competition as Vueling launches service on 11 of its existing Rome routes.

Vueling has revealed plans to expand massively its presence at Rome’s Fiumicino Airport next summer, with the introduction of 24 new routes (seven domestic and 17 international) and the decision to base a total of eight Airbus aircraft at the airport. Of the 24 new destinations to be served only three (all in Spain) are not already served by one or more carriers (based on schedule data for June 2013). A summary of the new services and likely competition next summer, is shown in the following table. Vueling’s CEO Alex Cruz was in Rome earlier this week to announce the airline’s major expansion plans for its base at Rome Fiumicino Airport. Eight aircraft will be based there next summer, operating over 30 routes, including seven domestic routes on which it will face direct competition from a struggling Alitalia.

Alitalia will face the biggest challenge as it is the dominant carrier on all seven of the domestic routes, on five of which it currently has a monopoly. easyJet will also feel the heat of increased competition as Vueling launches service on 11 of its existing Rome routes. These new routes will generate over 200 weekly departures, or about 30 daily departures.

Vueling first began serving Rome in December 2004 when it began flights from its Barcelona base. Over the following years it has served the Italian capital from a total of 10 Spanish airports (Barcelona, Bilbao, Granada, Ibiza, Madrid, Malaga, Menorca, Palma de Mallorca, Seville and Valencia) as well as Nantes, Paris CDG and Paris Orly, a total of 13 airports. The history of Vueling’s operations at Rome Fiumicino are summarised in the following table.

These existing routes generate around 90 weekly departures from Rome. The 24 new routes will result in Vueling operating well over 300 weekly flights in total, more than trebling the airline’s presence at the airport.