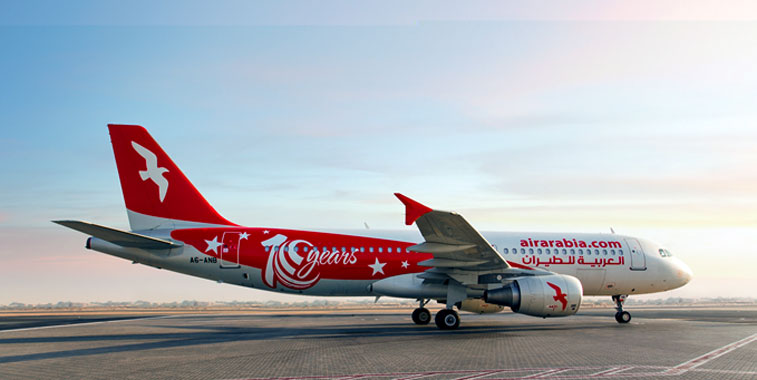 To celebrate its 10th anniversary of operations at the end of October, Air Arabia has created a special livery for one of its 28 Sharjah-based A320s. From its base in the UAE Air Arabia now connects to over 60 airports ranging from Lar in Iran (187 kilometres) to Chittagong in Bangladesh (3,720 kilometres).

Air Arabia began operations from its Sharjah base on 28 October 2003 with a flight to Bahrain. Beirut, Damascus, Kuwait and Muscat services were added almost immediately, as the airline sought to replicate the success of low-cost carriers in the US and Europe. Ten years on the airline has a fleet of 28 A320s based in Sharjah (and over 30 in total) and serves over 60 destinations non-stop, the newest of which, Hofuf, won anna.aero’s Cake of the Week prize last week. During that time relatively few routes have been dropped, though flights to the airline’s three destinations in Syria (Aleppo, Damascus and Latakia) are currently on hold. 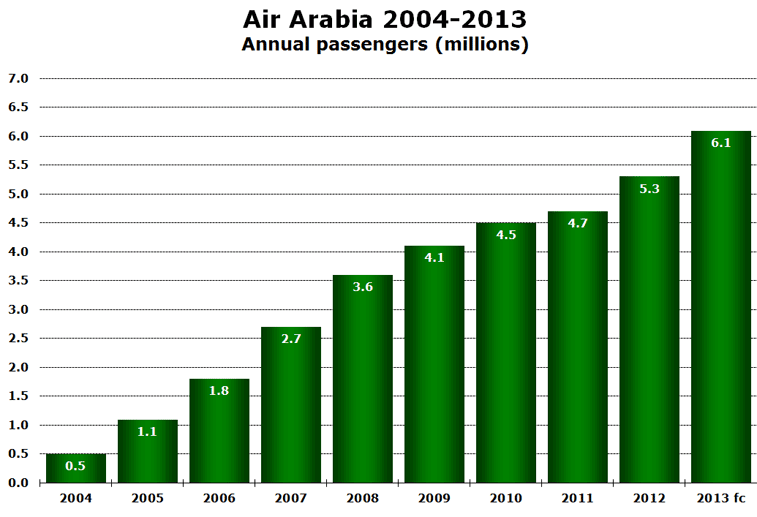 Source: Air Arabia plus anna.aero forecast for 2013 based on 15% growth in January-September 2013

Last year, the airline (including its subsidiaries based in Egypt and Morocco) carried 5.3 million passengers, up from 4.7 million in 2011. Since 2006 the airline’s average annual load factor has consistently been between 80% and 86%, and, most importantly, the airline is highly profitable.

Dhaka is #1 route by ASKs

The airline’s biggest routes as measured by ASKs (Available Seat Kilometres) from its Sharjah base are led by Dhaka in Bangladesh, which is served with 17 weekly flights. The only destinations served more frequently are Dammam in Saudi Arabia (23 weekly flights), and Kuwait City (21). 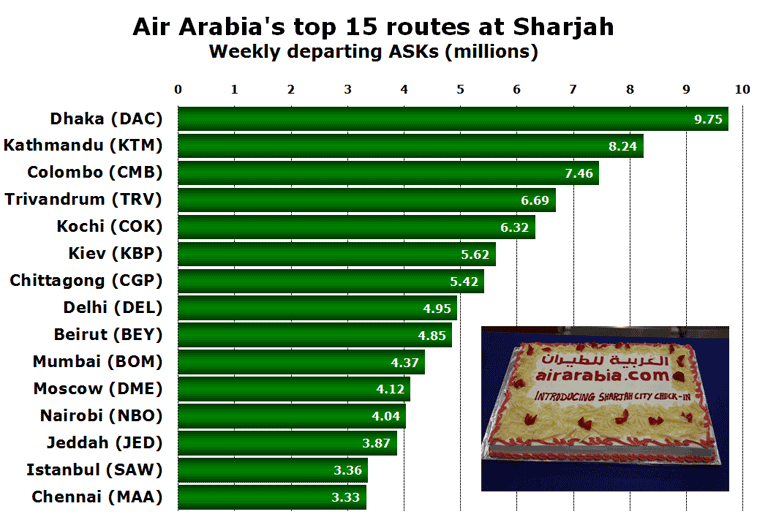 A total of 12 destinations on the airline’s Sharjah network are over 3,000 kilometres in length, with Chittagong being the longest at 3,720 kilometres. At the other end of the scale four destinations are less than 500 kilometres away; Bahrain (488km), Doha (386km), Muscat (351km) and Lar in Iran (just 187km). Air Arabia staff and the public celebrated the airline’s 10th anniversary together at events in Sharjah and Dubai.

Next 10 years: “serving all airports in the Arab world”

Addressing the 10th anniversary celebrations, Adel Ali, the airline’s Group Chief Executive Officer, said: “10 years ago, we couldn’t have anticipated how rapidly Air Arabia would grow, or how dramatically our pioneering low-cost model would change how, when and at what price people would travel here in the Arab world. As we enter into the second decade, we will continue to work hard to become the most preferred airline serving all airports in the Arab world, stretching from the Atlantic Ocean to Indian Ocean.”