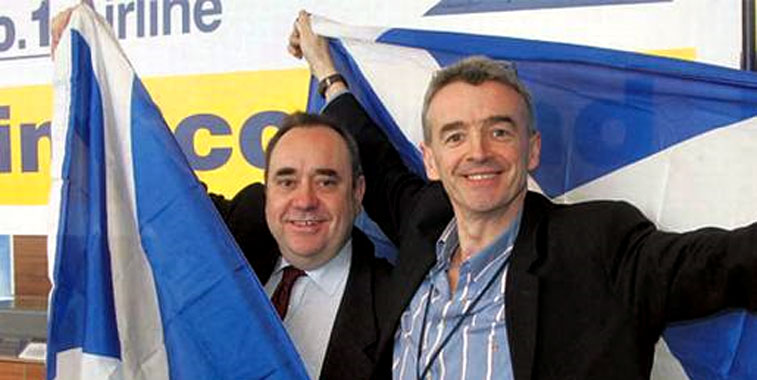 February 2011: Scotland’s First Minister, Alex Salmond, and an unknown airline executive opened Ryanair’s €10 million maintenance facility at Prestwick. Since then the independently-minded Scottish Government has bought the airport: “The strategic and economic importance of Prestwick Airport is such that we weren’t prepared to see Prestwick close.”

It was confirmed earlier this week that Glasgow Prestwick Airport had been sold by its New Zealand-based owners Infratil to the Scottish Government for the grand sum of just £1 (this follows the announced sale of Infratil’s other UK airport, Manston, also for £1, in October). The airport has apparently been running at a significant loss in recent years, and Infratil had been looking for a buyer for some 18 months. Infratil acquired the airport from Stagecoach Group in early 2001, when traffic was booming. The airport’s only scheduled services at present are provided by Ryanair, which also has a maintenance facility there. 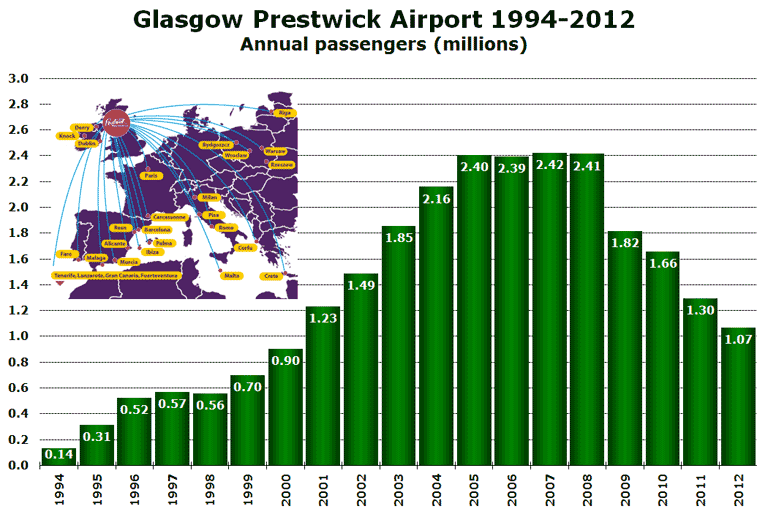 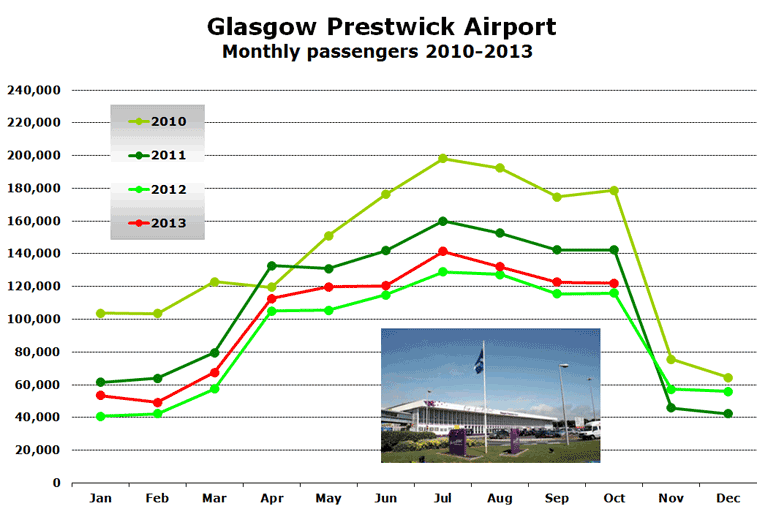 Although Ryanair operated around 100 weekly departures from Prestwick in July 2013 (compared with 170 back in July 2008), the number of destinations served has actually increased from 25 to 27 during that period, revealing a significant reduction in the average weekly frequency of flights on routes from the airport. In total anna.aero estimates that Ryanair has operated to almost 50 destinations at one time or other from Glasgow Prestwick. One of the routes no longer served is London Stansted. As recently as the summer of 2007 this route was operated with five daily (yes, daily) flights, but by the end of October 2011 the route had gone.

Wizz Air, which had served the airport since March 2006, moved its last two remaining low-frequency services (from Gdansk and Warsaw) to Glasgow International at the beginning of March this year.

Nationalisation – what the (Scottish) politicians said

The leader of South Ayrshire Council, Councillor Bill McIntosh, said: “The airport is vital to the local and national economy and this excellent news will be a huge relief for the 1,400 people employed there.”

Glasgow City Councillor Gordon Matheson, said: “I’m still unclear how the Scottish Government can build a sound business case for Prestwick as a passenger airport without skewing the market at Glasgow’s expense. Given Prestwick’s significant annual loss under its previous owners, and the fact that no private investors considered it a viable acquisition, it is difficult to see how the Government can make it a success as a passenger airport within State Aid rules.”