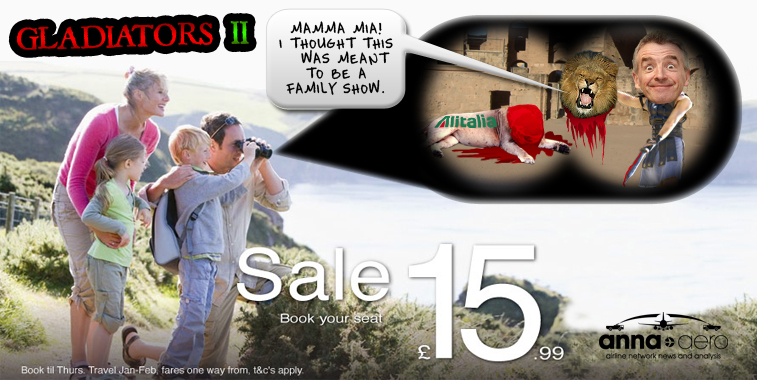 This is our last Michael O’Leary cartoon, ever. From now on, all our images will be based on the new family-friendly Ryanair (as portrayed in the picture here taken from the Ryanair homepage). Ryanair is changing, not just with the “nice” offensive, but also in big, new sweeping network choices which have seen this week’s ‘double base’ announcement at the main airports of Rome Fiumicino and Brussels Zaventem, cities only previously served at secondary airports.

Fans of conspiracy theories might be wondering if Vueling’s Alex Crux and Ryanair’s Michael O’Leary had been having secret meetings about the best way to hasten the demise of Alitalia, a carrier that has survived on state aid and dubious handouts/privileges for far too long. With Air France/KLM having apparently decided that enough is enough, Italian investors are having, once more, to bail out Alitalia while waiting for a shining knight to come and rescue them. [We assume they have Etihad’s phone number.] How any of the airline’s multiple existing (or future) investors can seriously believe that ploughing more funds into the airline (given its long track record of unprofitability) is a sensible way of trying to make money, is puzzling to say the least.

Ryanair’s announcement this week to start flights at a new Rome Fiumicino base before Christmas is just possible as most of the routes announced (so far) are domestic, and these have a later booking profile than international routes. So far just three domestic routes and two international routes have been revealed, though many more are likely if 10 to 12 aircraft are to be based at the airport by next September, as has been stated.

So far only 13 daily flights have been announced which suggests that, initially at least, only four aircraft may be required to operate these frequencies, though given that Ryanair has plenty of ‘spare’ aircraft in winter, it may allocate more just to ensure extra high reliability and service quality. Last week’s announcement by Vueling regarding its own plans in the Italian capital included new routes to Brussels, Catania, Lamezia Terme and Palermo, meaning that Ryanair will compete on all five routes with the IAG-owned low cost airline by next summer. So maybe the two LCCs have not been plotting together after all. Although the implications for Ryanair’s Rome Ciampino base are not yet completely clear, Ryanair has indicated that it still envisions expansion at this airport as well. 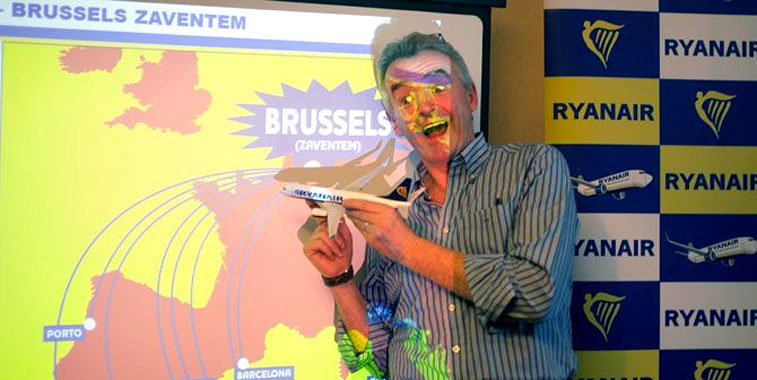 The new Ryanair bases in Rome and Brussels Zaventem mark a striking change in strategic network planning. Normally new Ryanair routes face no direct competition, as one or both airports involved are usually secondary airports, whereas nine of the 10 routes from Brussels are directly competed. (Photo: Thanks to our friends at Flandersnews.be)

On 27 November Ryanair also announced plans to start operations from Brussels Zaventem Airport starting at the end of February. 10 destinations have been revealed, all of which will be served at least daily, generating 14 daily departures and requiring four aircraft to be based at the airport. No changes to the airline’s Brussels Charleroi base have been announced at this time. All 10 routes are located in just three countries (Italy, Portugal and Spain), and therefore still very much north-south routes.

The strategic difference in network planning is striking. Normally when Ryanair announces routes it faces no direct competition as one or both airports involved are usually secondary airports. However, nine of the 10 routes from Brussels face direct competition, and on six of those routes from at least two other carriers.

While (Star Alliance) Brussels Airlines is a competitor on six of the 10 routes, it is worth noting that Jetairfly (TUI’s Belgian subsidiary) and Vueling, both provide competition on four routes, based on summer 2013 schedules. However, Vueling recently announced an expansion of its own at Brussels and next summer will also be serving Ibiza, Lisbon, Palma de Mallorca, Porto, Rome and Venice. So in the same way that when Ryanair started a base last year at Warsaw Modlin Airport it chose to virtually duplicate Wizz Air’s network at the airport, this time Ryanair is basically copying Vueling’s network (with the exception of Vueling’s Santiago de Compostela route). But Ryanair has avoided any direct competition with easyJet from Brussels, which itself is adding new routes from the airport next summer to Bordeaux, London Gatwick and Naples, bringing the number of destinations it serves from the airport also to 10.

This week has also seen the start of Ryanair flights to Lisbon, another capital city airport that the carrier had previously steered clear of. It also announced plans to resume flights at Prague, yet another capital city airport. This suggests that Ryanair has acknowledged that if it intends to grow significantly (now that a big order of Boeing aircraft has been agreed) it needs to grab market share from existing airlines. Which begs the question as to what may happen next.

Will Venice Treviso flights be moved to Venice Marco Polo? Could SAS and Norwegian find themselves being challenged more directly by Ryanair if it moves flights from Stockholm Skavsta to Stockholm Arlanda, and/or from Oslo Rygge to Oslo Gardermoen? What about shifting Weeze and Hahn capacity to Düsseldorf and Frankfurt? Or Karlsruhe-Baden flights to Stuttgart?

A lot of airport bosses across Europe with Ryanair flights will suddenly be double-checking the agreements they have with the airline to see what it says regarding capacity/frequency/network commitments, over the coming seasons. As Ryanair has demonstrated many times over the years, it has no qualms about shifting capacity between airports, as and when it feels the need to.