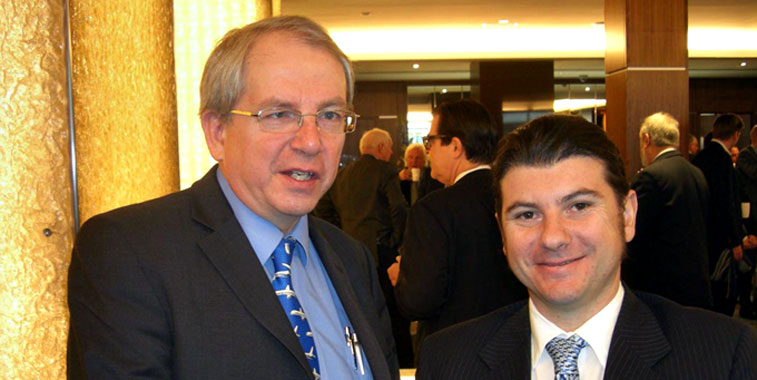 belleair’s CEO Arbi Xhelo (right) met with anna.aero’s Ralph Anker (left), back in April 2013 at the ERA Regional Airline Conference in Edinburgh. Accounting for half of all airport passenger’s at Albania’s Tirana Airport in 2012, the airline’s grounding is bad news for the airport, though Italian LCC blu-express has stepped in to provide flights on seven of belleair’s 18 Italian routes this winter.

Tirana Airport serving the capital of Albania faces a major challenge after its biggest carrier, locally-based belleair, ceased operations. The airline, which was formed in 2005, operated a fleet of two A320s, three A319s and two ATR 72s, to over 20 international destinations, the vast majority of which were in Italy. According to Tirana Airport’s press releases the airline accounted for 36.5% of airport traffic in 2008, 43.9% in 2010 and 50.1% in 2012. In 2012 Tirana Airport handled almost 1.7 million passengers, down from its peak of just over 1.8 million in 2011. Alitalia and Air One combined accounted for around 19% of passengers in 2012. In the first nine months of 2013 Tirana Airport passenger numbers are up 5.4%, with Pegasus Airlines launching a new five-times weekly service to Istanbul Sabiha Gökçen in September.

86% of belleair capacity this summer on routes to Italy

According to Innovata / Diio Mi data for August 2013 belleair’s network from Tirana comprised the following routes:

There are 17 destinations in Italy out of the airline’s total of 25 routes from Tirana, and they account for 86% of the airline’s weekly departures from the airport (105 out of 128). The only routes on which belleair faced direct competition were Athens (Olympic Air), Brussels (Jetairfly), Milan Malpensa (Air One), Pisa (Air One), Rome (Alitalia) and Venice (Air One). In addition, British Airways competed indirectly on the London route by serving London Gatwick.

blu-express to the rescue on seven routes

It has been announced that blu-express, the Italian LCC subsidiary of Blue Panorama Airlines, will operate flights from seven Italian airports to Tirana with immediate effect. According the airline’s booking tool the seven airports (and weekly frequencies) are Bologna (five), Milan Bergamo (five), Milan Malpensa (seven), Pisa (three), Rome Fiumicino (six), Venice (six) and Verona (four). Some of these frequencies will be operated on behalf of blu-express by Air Explore, a Slovakian carrier. How long these services operate for is not yet known. blu-express clearly has some spare capacity in the off-peak winter season, but whether it will have the capacity to continue these routes next summer will no doubt depend on how the routes perform this winter.

On the airline’s website, the following message was displayed.

Following eight years of successful operations from Albania towards European destinations, Belle Air is obliged to temporarily suspend its operations due to the general economic situation, the decline of the purchasing power, recession in the markets it operates as well as from the freezing for over 18 days of its bank accounts.

The above mentioned situation impedes the continuation of the operations. During this period, Belle Air will start a process of restructuring aiming to return with lower prices and quality service in the Albanian Market. Following this restructuring process, Belle Air invites Albanian and Foreign investors to be part of the revival of this success story of an Albanian born business.

With the help of the Italian Company Blue Panorama, we have been able to provide our customers holding a valid Belle Air ticket reference, the opportunity to purchase a new ticket at a special adjusted price from the low cost Blu-Express of Blue Panorama Airlines for flights starting 25.11.2013 departing from Tirana to Italy and vice – versa, on the desired travel date and destination provided available places. To proceed with your booking, please contact: +355 4 2390 111

For all customers requesting refund: The customers should contact the bank that has issued their credit cards and show the ticket reference and payment receipt in order to request refund.

To continue other refund procedures please contact: +355 4 2 390 390. All Belle Air passengers and whoever else is interested to purchase a new ticket from Tirana to Bergamo (Orio Al Serio), Bologna, Milan Malpensa, Rome Fiumicino, Pisa, Venice and Verona and vice versa can call directly Blu-Express Call Center of Blue Panoroma Airlines +39 06 98 95 6666 or visit www.blu-express.com or www.blue-panorama.com

We apologize for the inconvenience caused from this temporary suspension and we thank YOU for your trust in all these years.