easyJet’s Hamburg Airport routes announced – how did anna.aero do with its route predictions? 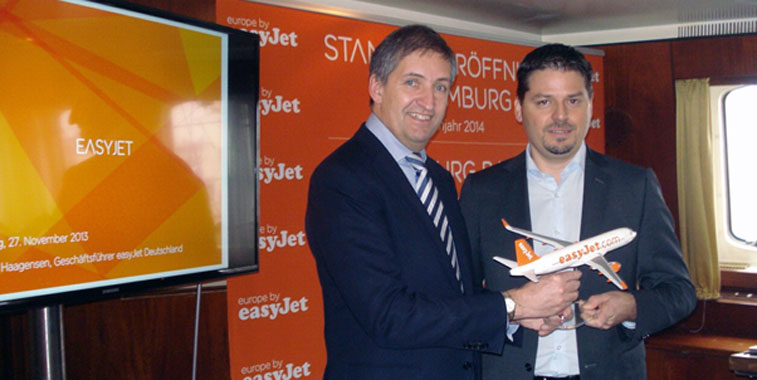 Birthday boy! Hamburg Airport CEO Michael Eggenschwiler (left) celebrated his birthday with the announcement of easyJet’s 10 new routes for its based operations next summer with easyJet Country Manager for Germany, Thomas Haagensen (right). “This is the best gift I could wish for me and Hamburg airport,” enthused Eggenschwiler.

Here at anna.aero, we like to give our readers the latest route development news before it happens (ok — before it’s officially released by the airline or airports concerned). When we do this, we also like to make our informed predictions on potential route networks when a new airline base is mooted. easyJet’s new base in Hamburg was one such occasion – so how did we do?

Our first prediction was that the airline would not enter the German domestic market, and despite the fact that some of Hamburg’s biggest markets in terms of weekly seat capacity are domestic routes, the LCC has avoided taking on the incumbents Lufthansa and airberlin in this particular arena.

The 10 new international routes will be flown to a mix of leisure and business destinations, some of them will be operated year-round, with some highly seasonal markets (Ibiza – to be operated for around 16 weeks only) thrown-in as well. “Due to the fact that we will base two A319s in Hamburg, we are able to design our schedule to the needs of our business travellers, and we now can offer early morning flights from Hamburg to London Gatwick and Basel, and a late evening return. That will please business travellers in Hamburg, which we expect to generate a share of about 20% of our passengers,” added Thomas Haagensen, easyJet Country Manager for Germany.

Of the routes listed above, anna.aero correctly predicted that Copenhagen, Milan Malpensa (although admittedly inbound from its Milan base) and Palma de Mallorca would be in easyJet’s initial route network from Hamburg. Other predictions which have failed to materialize at this point include Brussels, Paris CDG (both of which will be started from London Gatwick next summer), Amsterdam, Istanbul*, Antalya*, Barcelona, Moscow (DME)*, Malaga and Heraklion. However, with plenty of summer season-only routes, there is still scope in the winter schedule, especially when a third aircraft will arrive in Hamburg allowing easyJet to increase the number of destinations it serves to 21, for some of anna.aero’s predictions to come true. Almost certainly, we would expect Geneva to feature as one of the five new winter destinations.

Given the route selection, it would seem clear that easyJet has a German market strategy, as seven of the 10 new Hamburg routes (Copenhagen, Milan Malpensa, Nice, Palma de Mallorca, Venice, Athens and Naples) are also operated from its only other German base at Berlin Schönefeld, with Catania, Ibiza and Split being new to the market. That said, Split will be added to the carrier’s Berlin Schönefeld network on 21 June next year. Notably, Athens will also go from being unserved at Hamburg in S13 and W13, to having easyJet, as well as Aegean Airlines (thrice–weekly A320 from 27 May), in S14. 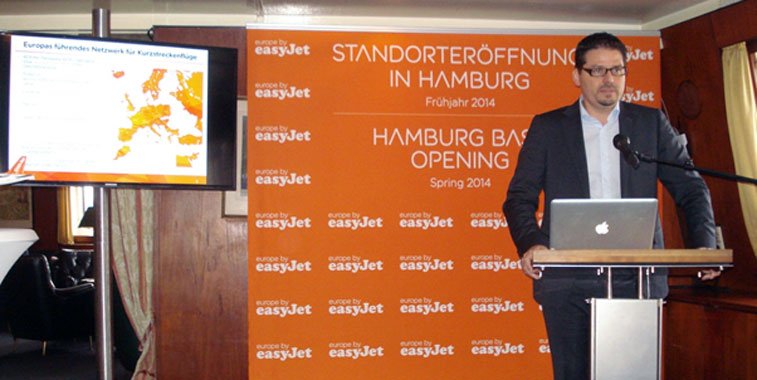 The location for the Hamburg route announcement was carefully selected — aboard the historic museum cargo ship ‘Cap San Diego’, right in the heart of the busy and famous Port of Hamburg: “We already told you some weeks ago that we would anchor in Hamburg – now we found the right location for it!” joked easyJet Country Manager for Germany Thomas Haagensen to the attending journalists.

Although unit three will join the Hamburg fleet next autumn “this will be not the end of the line,” insisted Haagensen, who sees a big potential in the airport’s catchment. “We have no problems with germanwings and the other LCCs being active in Hamburg. In fact, the additional competition stimulates the market”. For Hamburg Airport CEO Michael Eggenschwiler, the routes to Spain (where easyJet will compete with germanwings, airberlin, Vueling and Norwegian) have “a big potential and demand and leave enough range for another carrier, like easyJet”. For easyJet the directive is clear: “We want to increase frequencies to prime destinations and airports that both our business and leisure travellers get the right product they need,” stated Haagensen.

Thanks to Andreas W. Schulz, from www.aviatourcon.de, for on-site reporting and pictures for anna.aero.

* In hindsight these services were unfeasible, as easyJet is not a German airline (only having UK and Swiss AOCs) and would therefore not be permitted to fly to these countries due to existing bilateral agreements in place. Our three suggested route replacements from Hamburg would therefore be Stockholm Arlanda (currently just flown from Geneva), Fuerteventura (flown from three UK bases of London Gatwick, Liverpool and Bristol, as well as Basel) and Salzburg (flown from Berlin Schönefeld and from four UK bases).