Ryanair giveth and Ryanair taketh away. At Bremen, Ryanair’s modest expansion (along with that of Germania) has helped the airport be one of only two regional airports in Germany reporting growth in 2013, with Weeze (another Ryanair base) being the other. However, Ryanair’s network cutbacks at Karlsruhe/Baden-Baden have contributed to that airport reporting an almost 20% reduction in passenger numbers so far this year.

Hopes that the provisional German coalition government may follow Ireland in abandoning its tax on air travel, appear to have been dashed in recent days. The tax, which has been in operation since 2011, has helped suppress demand for air travel in Europe’s biggest economy. In 2012, passenger numbers across German airports grew by just 1.1%. So far in the first 10 months of 2013, terminal passengers are up just 0.6%, with domestic passenger demand down 3.8%. Since the beginning of 2012, year-on-year passenger numbers have been flat or growing slightly, except for the period November 2012 to March 2013, when traffic was down in each month. This confirms the growing trend of airlines cutting capacity during the ‘off-peak’ winter months when routes are less profitable. 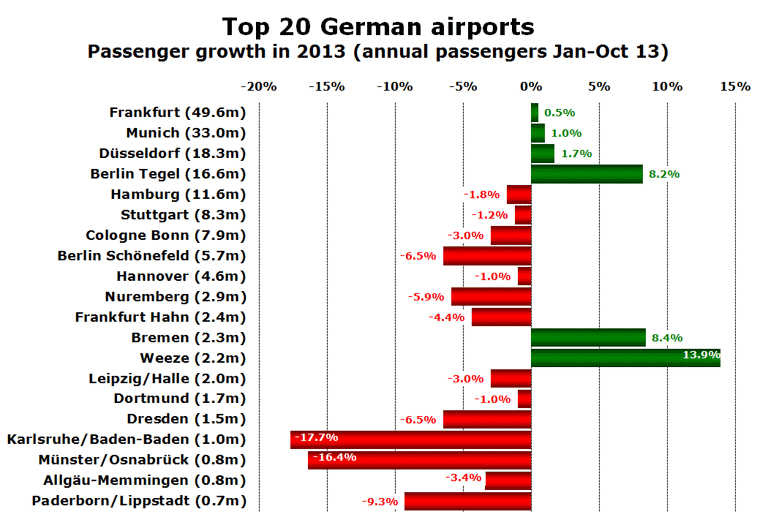 Among Germany’s top 20 airports only six have reported year-on-year growth for the first 10 months of 2013. However, this includes all four of the country’s biggest airports, as well as Bremen and Weeze (both Ryanair bases). Double-digit declines have been recorded at Karlsruhe/Baden-Baden (also a Ryanair base) and Münster/Osnabrück.

Karlsruhe/Baden-Baden Airport became a Ryanair base in the summer of 2012, at which point the airline served 20 destinations from the airport, though around half of these were only on a seasonal basis. This summer the number of weekly departures for the airline at the airport had fallen from 63 per week to 53, with Budapest, Riga and Vilnius no longer served, but Marrakech added to the network. Other changes at Karlsruhe/Baden-Baden this summer included Germania taking over routes previously operated by TUIfly, and airberlin dropping its multiple-daily Hamburg service, which was taken up by InterSky. InterSky's thrice-daily 68-seat ATR 72 service replaced airberlin's four times daily 76-seat Q400 service on the route from Karlsruhe/Baden-Baden to Hamburg on 19 April 2013, resulting in a reduction in seat capacity on the route, further contributing to the airport's decline in passenger numbers in 2013.

The cause of Münster/Osnabrück’s decline in passenger numbers can be firmly placed at the door of airberlin. Germany’s second largest airline dropped its domestic routes from the airport to Berlin Tegel and Munich, and also withdrew low-frequency flights to many leisure destinations. The brief presence of OLT Express Germany at the airport last winter failed to provide a long-term solution. On a positive note, the airport welcomed its first ever Ryanair flights this summer (to Girona and Malaga), and also celebrated the launch last October of daily flights with Air France (operated by CityJet) to London City Airport. More recently the airport welcomed AIS Airlines to the airport, operating twice-daily flights on weekdays to Stuttgart with Jetstream 32s.