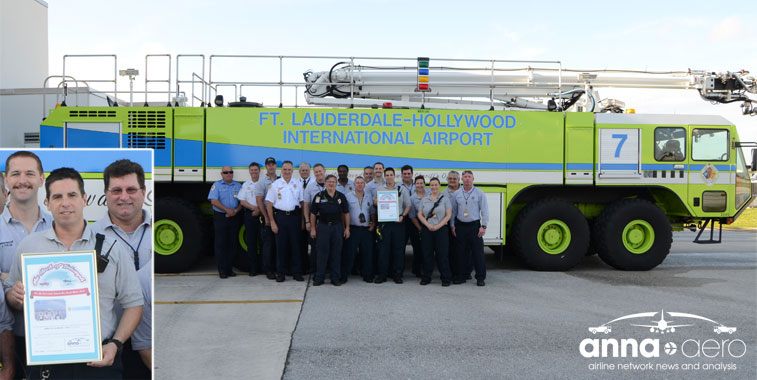 The fire crews from Fort Lauderdale celebrate their ‘Arch of Triumph’ victory for their JetBlue Airways’ Lima launch FTWA with pride, standing in front of one of the tenders that helped them deliver the win.

This week’s FTWA winner is Tampa Airport, beating off previous winners like Dubai Al Maktoum and fellow Floridian airport Fort Lauderdale in the process, and also going ahead of both airports on the 2013 ‘Arch of Triumph’ leaderboard (below). Its 30-plus score was not enough to trouble Aena’s Tenerife Norte, which has held the top spot since week eight. In Tampa securing the victory, it has also meant that North America is now sharing the #1 spot with Europe in terms of the global competition, with both regions sitting proud with four wins versus Asia’s three. Its all to play for with just one ‘Arch of Triumph’ left in 2013. 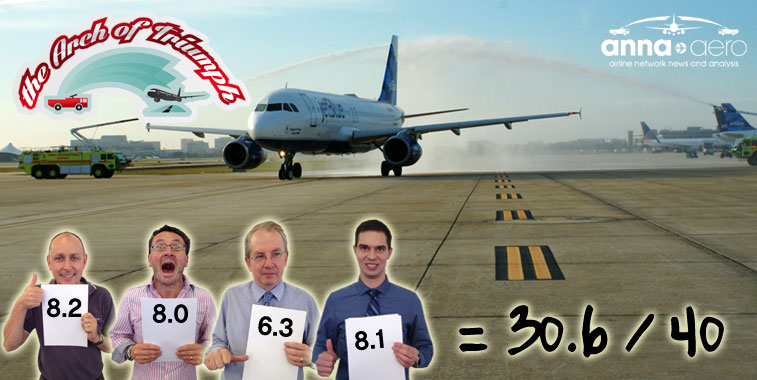 Marc: 8.2 There is about three degrees of ‘Gangnam Style’ going on with this FTWA, which has ultimately impacted on what could have been a serious contender for this year’s trophy. Shame! However, Tampa seems well-set to be a big player in the shake-up for 2014 honours.

Paul: 8.0 This kind of arch is called a “Tampa Bay Storm” and can only be performed with an articulated monitor as brilliantly demonstrated here. It is so inspiring that an AFL team called the Pittsburgh Gladiators relocated to Florida in 1991, just so they could adopt the name.

Ralph: 6.3 Was the photographer delayed for some reason? A few second earlier and this would have been much better.

Vlad: 8.1 Excellent symmetry from Tampa’s fire squad, even though there is a bit of ‘Gangnam Style’ on top. Great FTWA, but I can’t say the same about the photographer who probably forgot to turn on his camera in time. 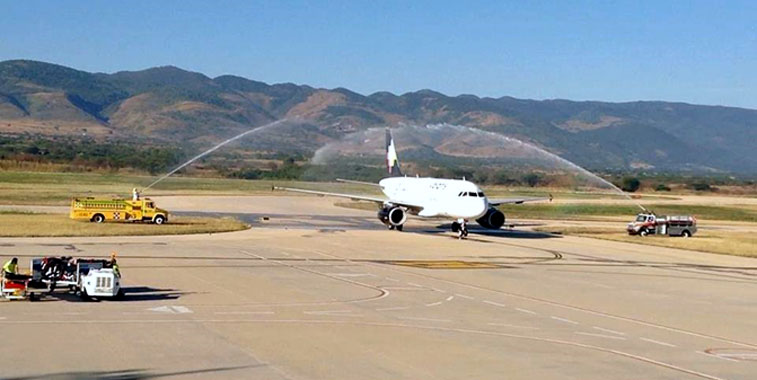 Marc: 5.3 Clearly having a two different tenders has created issues here at Tuxtla Gutierrez, as we seem to have two halves of two different FTWAs, resulting in a sort of ‘big boy, little boy’.

Paul: 7.1 If we awarded points for Gangnam style this would be a 10. But everyone would win so we don’t.  It’s said the tourists fly into Tuxtla Gutierrez, but don’t stay and move onto other areas of Chiapas. Why? It looks lovely!

Ralph: 6.5 Lovely backdrop to this FTWA and well-positioned fire trucks. Just a shame the arch doesn’t quite join-up.

Vlad: 7.0 A lack of coordination from the fire team in Mexico, although I like the left-hand side ‘school bus’. 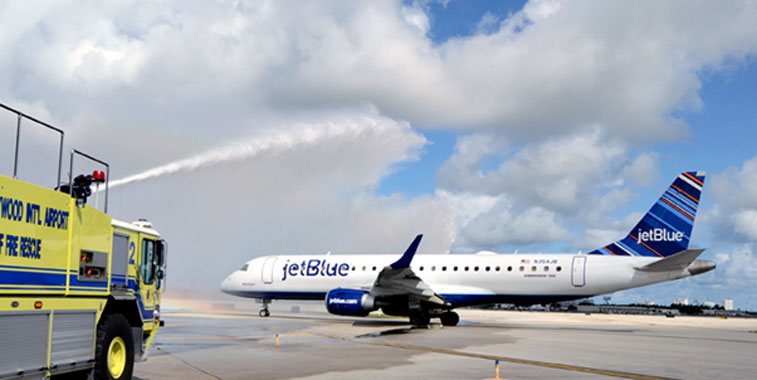 Fort Lauderdale’s one-week winning streak comes to an abrupt end with this offering.

Marc: 4.4 Fort Lauderdale clearly has a taste for FTWA victory having secured the weekly award just two weeks ago for JetBlue’s Lima launch. However, that win will not be repeated this week, because the arches have been lost in the Florida cloudscape.

Paul: 6.0 A route to Port-au-Prince in Haiti deserves applause and a high score for effort. But only at the arrivals end. A sudden drop down the charts for Fort Lauderdale.

Ralph: 4.6 Is this a one-truck salute?  However, it’s an interesting angle and there’s a hint of a rainbow around the front of the truck which gets a point from me.

Vlad: 5.0 Just two points for a lonely squirt, plus three more for the blue contrast going around; thus, five in total. I’m so good at maths! 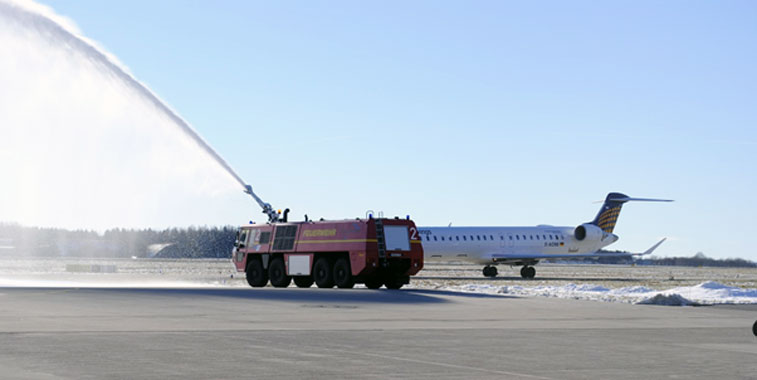 The best thing in this FTWA is the snow.

Marc: 1.9 I have given this FTWA my fifth-lowest score of 2013, well, because it’s the fifth-worst FTWA I have seen in the 13 weeks we have been running this competition. The blame lies entirely with the photographer (hopefully not the airport CEO’s wife) who should be consigned to snow-clearing duties with immediate effect.

Paul: 9.0 I’m a good friend of the Memmingen Airport CEO Ralf Schmid. I like to ski in nearby Garmisch-Partenkirchen, and I am delighted to see there is already snow. None of this has influenced my decision. This arch is called a “ski-jump” – it’s well done and I won’t tolerate any criticism of either the arch or Memmingen Airport’s management.

Vlad: 2.0 Considering the snow around the runway, I believe the photographer was waiting inside and forgot the flight had just landed. At least he tried to save the day with this picture.

We always love our FTWAs with a bit of airport tower action.

Marc: 6.3 This is the third offering from Dubai Al Maktoum so far in 2013, and the airport has already won a weekly FTWA award with its Wizz Air new route from Budapest. However, some of the bad form exhibited in its FTWA for the Jazeera Airways launch in early November appears to have crept-in again here, with a clear ‘Dukes of Hazard’ on display.

Paul: 6.7 I can predict that the other judges will say the same thing – this is a “Tower Bridge” – great for getting tall ships under, but not tall aircraft (or narrow bodies for that matter). It’s got to be joined-up or it’s not an arch!

Ralph: 6.5 Two truck, two bits of an arch, but a bad case of ‘Tower Bridge’ syndrome for me. Nice to see the control tower making an appearance.

Vlad: 6.4 Not sure if this is due to poor coordination or truck misalignment. Extra points for the control tower.