Kyrgyzstan’s capacity to Russia grows by 65% in 12 months Bishkek Airport, also known as Manas, was used as a US Air Force base supporting Operation Enduring Freedom and the International Security Assistance Force in Afghanistan.

Located in Central Asia, Kyrgyzstan borders Kazakhstan to the north, Uzbekistan to the west, Tajikistan to the south-west and China to the east. The landlocked country, which has an estimated population of 5.5 million, declared its independence from the Soviet Union in 1991. Kyrgyzstan’s largest city and its capital, Bishkek, dominates air traffic, with 64% of all weekly seats, while the remainder of services are offered by Osh Airport.

The country’s main airport, Bishkek, handled 1.05 million passengers in 2012, whilst, Osh recorded 0.82 million. Known as Manas, Bishkek had a vital role in the US presence in Afghanistan, as it was used as a military base supporting Operation Enduring Freedom and the International Security Assistance Force.

Analysis of Innovata’s ASKs data indicates that, while the trend was uneven between 2004 and 2009, the two airports have become increasingly attractive for the network planning community. In fact, December 2013 capacity will result in over 200% growth when compared to the same period 10 years earlier, including an impressive increase of 4600% for Osh. 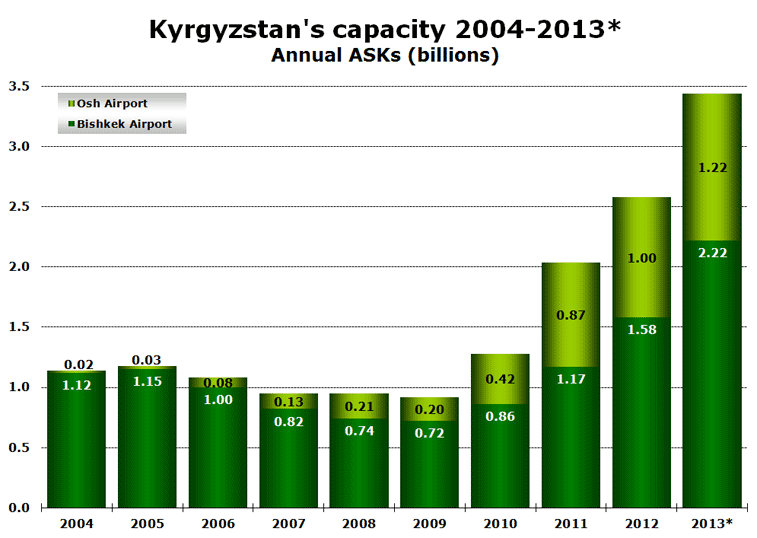 Overall, capacity growth has visibly exploded after 2009 due to the strong interest in the development of air services at the two airports, achieving a triple-digit increase of over 270% in 2013, as compared to 2009. When compared to December 2012, Bishkek noted a larger growth (41%) than Osh, which experienced an annual change of 22% this December.

Kyrgyzstan Air dominates with 25% of flights and seats

Looking at the top airlines operating in Kyrgyzstan, there is no surprise that the flag carrier, Kyrgyzstan Air dominates, as it controls almost 25% of flights and seats, even though it reduced its weekly seat offer by 6.3%, when compared to December 2012. The airline, which operates on 18 routes from Kyrgyzstan, has recently launched services to Dubai Al Maktoum, with twice-weekly flights on 9 December. Out of its 18 routes, 12 are operated to Russia, with Moscow Domodedovo being the most frequently served destination with a combined 1,708 weekly seats from both Bishkek and Osh. 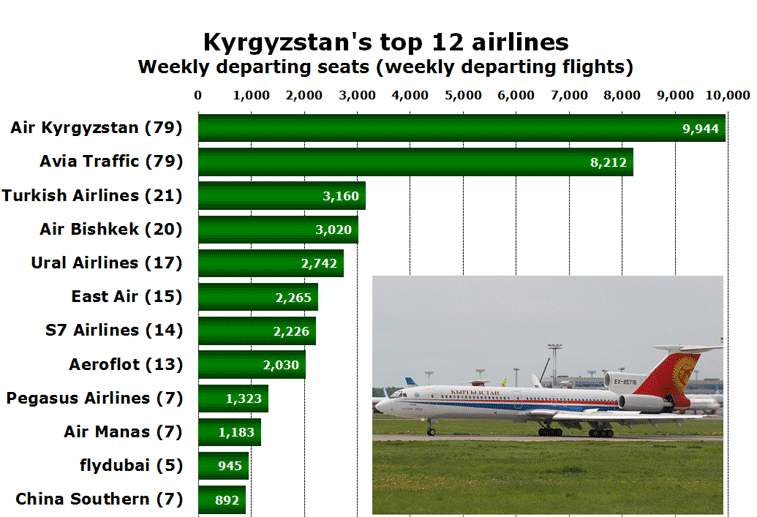 In the past 12 months, three new entrants have made it onto this year’s table, namely Air Manas, Pegasus Airlines and East Air. Both Air Manas and Pegasus inaugurated daily services from Bishkek to Istanbul Sabiha Gökçen Airport, while East Air started serving Moscow Domodedovo and Novosibirsk with twice-daily and weekly flights respectively. Besides Kyrgyzstan Air and the new entrants, all other top 12 carriers recorded growth in 2013. The stand out performance is that emanating from Ural Airlines, which experienced an annual seat growth of over 145%, owing to the launch of five weekly services from Bishkek to Moscow Domodedovo and serving Chelyabinsk, in Russia, weekly.

Russian destinations the most frequently served

The top 12 international destinations represent over 89% of all seats, with Moscow Domodedovo not only being the biggest, with a market share of 30.3%, but also the fast growing destination. Seats to the largest airport in Russia are up 87% from 2012 figures, as eight carriers are operating a combined 61 weekly flights from the two Kyrgyz airports. Out of the top 12 destinations, Russia is the most frequently served country with seven destinations, featuring a seat market share of 61% across Bishkek and Osh, which highlights the strong links that Kyrgyzstan still has with the world’s largest country. 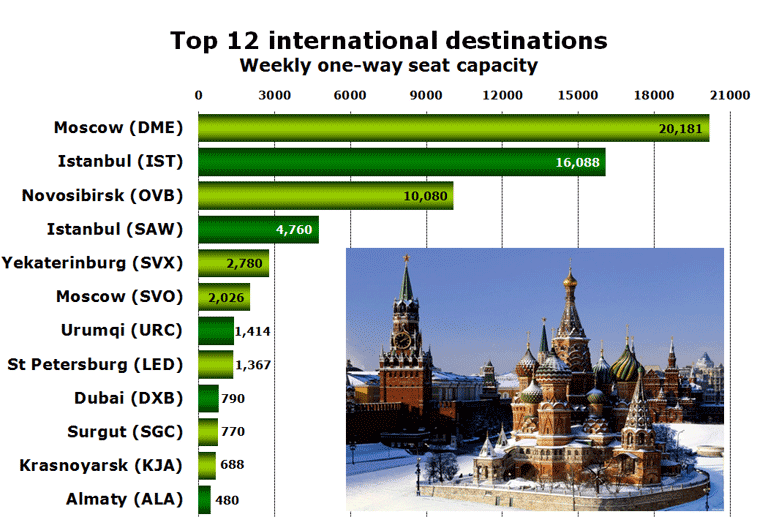 Both Moscow Domodedovo and Istanbul Atatürk have managed to maintain their positions in 2013; however Sabiha Gökçen, Istanbul’s second airport, has made it as a new entrant into this year’s ranking, with a combined seat share of 8.26%, provided by Pegasus and Air Manas.

Since the start of 2013, both Bishkek and Osh have welcomed 16 new routes, from 10 different carriers. Air Bishkek and Kyrgyzstan Air have both launched three services each, the latter launching twice-weekly services to Dubai’s second airport, utilising a mixed fleet of 113-seat 737-500s and 133-seat 737-300s. Unsurprisingly, 11 routes have been launched to Russia, with Moscow Domodedovo being the most popular new addition to airline networks.