Seven airlines can claim to be #1 at one or more of the UK’s busiest airports; easyJet leads way at six airports British Airways is the leading airline at just three major UK airports; London Heathrow, Aberdeen and London City. At London City (where the airline is branded as BA CityFlyer) it has added new routes this summer to Granada (the only connection from any UK airport) and Düsseldorf. London City is also the second-fastest growing UK airport (among those handling over one million annual passengers) with passenger numbers up 12% according to UK CAA statistics.

According to The Economist the latest 2013 GDP forecast for the United Kingdom suggests growth of 1.4%. The link between air travel demand and economic growth has long been accepted, so it should come as no great surprise that passenger numbers at UK airports during the last 12 months have actually risen by 3.4% to just over 230 million. This is despite the fact that the UK experienced decent summer weather for a change, which may have suppressed last minute demand for ‘sunshine’ holidays.

The UK has 21 airports which handle over one million annual passengers, with recently renovated London Southend expected to join the club next year. Unlike at German airports where only six of the top 20 airports are growing this year, 18 of the UK’s top 21 airports are reporting passenger growth on a rolling 12-month basis. Belfast City (+14.1%), London City (+12.0%), Glasgow Prestwick (+10.7%) and Leeds Bradford (+10.2%) have all managed to report double-digit growth, while the only airports suffering a downturn in demand are Jersey (-0.5%), Belfast International (-7.1%) and Liverpool (-7.9%). The change in fortunes at the two Belfast airports can be explained primarily by Aer Lingus’ decision to move its Northern Ireland base from Belfast International to Belfast City at the end of October 2012. 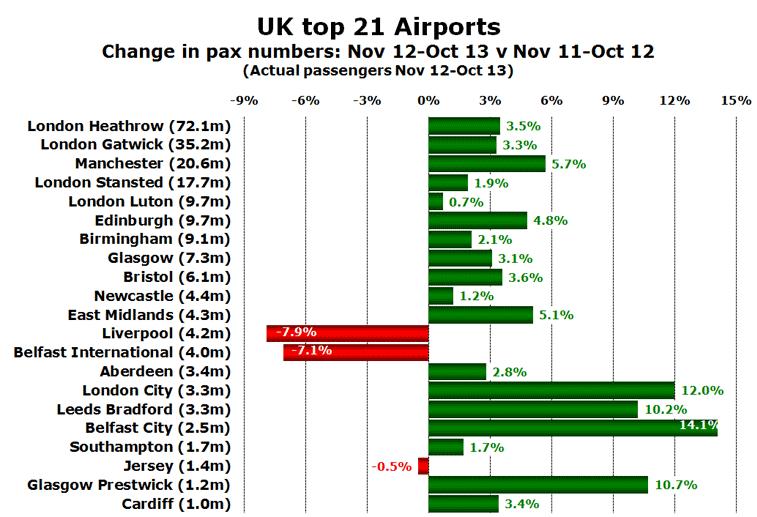 Apart from London Heathrow, British Airways is the biggest operator at just two other UK airports, Aberdeen and London City. easyJet is the biggest airline at six UK airports, Ryanair at four, flybe at three, with Thomson Airways and Jet2.com tops at two airports each, and Monarch Airlines taking the leading position at Birmingham. Thus a total of seven different airlines can claim to be the biggest carrier at one or more major UK airports, a statistic that anna.aero is fairly certain is unrivalled in any other European country.

Apart from Ryanair, other non-UK airlines that make the top three at individual airports are Aer Lingus (#2 at Belfast City), Air France (#2 at London City), Lufthansa (#3 at Heathrow), SWISS (#3 at London City) and Wizz Air (#2 at Luton). Only Glasgow Prestwick is not served by at least three different airlines, with Ryanair now being the sole operator at the airport since Wizz Air moved its flights to the other Glasgow airport.