When anna.aero last looked at the Brazilian aviation market in July, there were worrying signs that growth in the dominant domestic market, as measured by airline RPKs (Revenue Passenger Kilometres), had ground to a halt. Five months on and the position still looks rather similar. Domestic RPKs were up in June and October, but down in July, August and September. 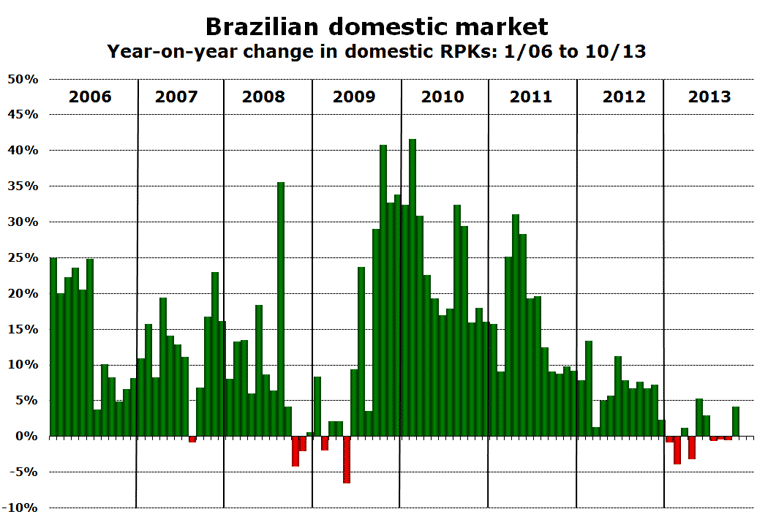 Analysis of Innovata / Diio Mi schedule data suggests that things may pick up again from December, with airline ASKs (Available Seat Kilometres) on domestic routes growing by between 4% and 7% for the period December 2013 to March 2014. However, an increase in available capacity does not necessarily mean that there will be an increase in demand.

Azul plus TRIP have 17% of domestic market 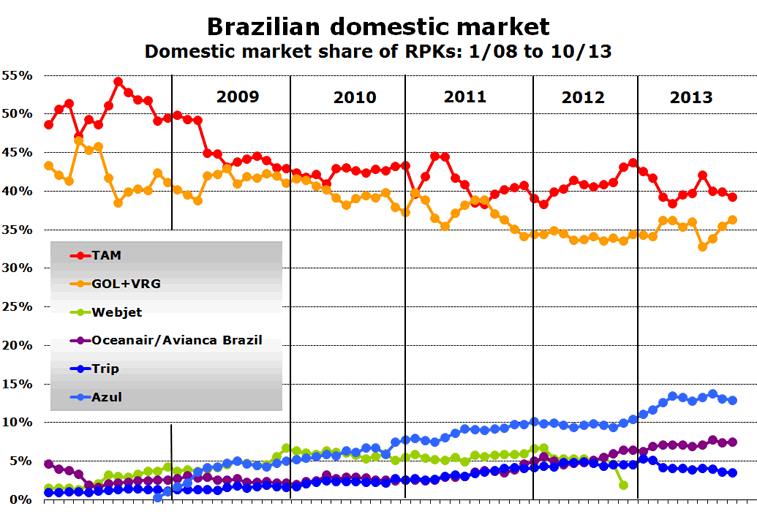 Seat capacity up 4% in December across all airports

According to schedule data from Innovata / Diio Mi, seat capacity across Brazil’s more than 100 commercial airports is up just over 4% in December. Of Brazil’s top 12 airports, four are reporting a reduction in weekly seat capacity, with Recife down 8%, Curitiba down 3%, Rio’s Galeấo Airport down 2% and Sao Paulo Congonhas down 1%. Doing rather better are Sao Paulo Guarulhos (+17.5%), Viracopos (+16.1%) and Fortaleza (+10.0%).

Despite being the host country of next year’s FIFA World Cup, international seat capacity from Brazilian airports is currently up only 1.4% (in December) based on analysis of Innovata / Diio Mi schedule data. Most of the new international services launched during 2013 have been by non-Brazilian carriers and include Ethiopian Airlines, Etihad Airways and US Airways. In the second half of this year new international services have been launched by Aerolineas Argentinas, American Airlines, Cubana, GOL and Royal Air Maroc.

American’s new Brazilian service, which started on 22 November, operates Miami-Curitiba-Porto Alegre-Miami, and means that Miami International Airport now serves nine destinations in Brazil, more than any other US airport. Brazil is the airport’s top international market with more than 1.6 million annual passengers, and growth is expected to continue with a tenth Brazilian route, Belem, to be served by TAM, starting in early February.