Vueling’s Barcelona base continues to grow. This year it added 35 new destinations from the airport (passing 100 in total), including Oslo, one of 24 routes on which it will face competition from two carriers next summer; in this case Norwegian and SAS. Next summer will see the addition of 13 more destinations, with three destinations being dropped, taking the total to 114 destinations.

In the summer of 2009, Ryanair’s London Stansted base became the first in Europe to serve more than 100 destinations with non-stop low-cost flights. This summer that achievement was matched by easyJet at London Gatwick, and Vueling in Barcelona. According to Ryanair’s website it currently offers flights to 128 destinations from Stansted, including the 12 new routes it announced recently. However, Vueling’s Barcelona base is catching up with the IAG-owned Spanish LCC recently announcing further additions to its main base, and taking the number of destinations served to 114 next summer. Between summer 2011 and summer 2013 the airline increased its network from Barcelona from 44 destinations to 104. 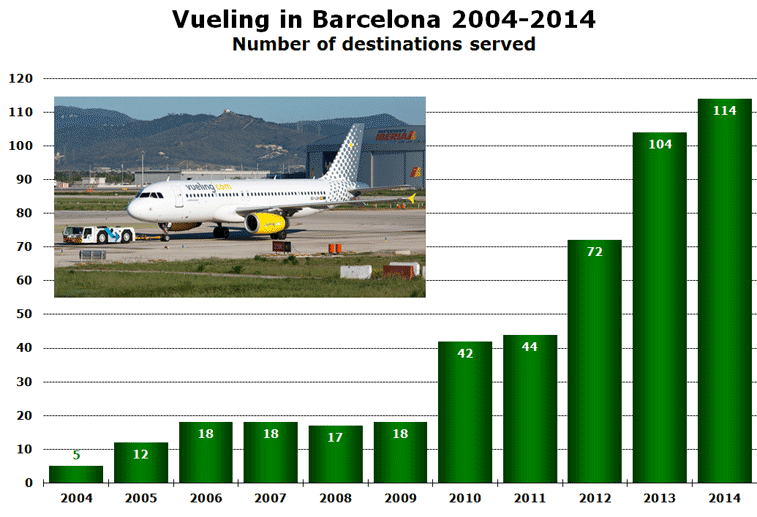 So far Vueling has put on sale a further 13 new destinations for summer 2014. These include year-round services to Dakar, Jerez, Paris CDG, Porto, Leipzig and Warsaw, as well as seasonal flights (starting in June) to Bastia, Belgrade, Budapest, Donetsk, Kaliningrad, Kharkiv and Krakow. Dakar, at just under 3,500 kilometres is beaten only by Banjul (3,590 kilometres) in terms of sector length. However, three routes served this summer are not currently on-sale for next summer. Pamplona flights ended on 30 September, while services to Strasbourg (ends 5 January 2014) and Lille (ends 28 March 2014) appear to have underperformed. Other destinations that have been tried and found wanting from Barcelona are Ciudad Real, Groningen, Ljubljana, Southampton, Valencia and Verona.

Competition on 63 of 114 routes from Barcelona

Closer analysis of available schedule data for next summer reveals that Vueling will face direct competition on 63 of its 114 routes from Barcelona, while having a monopoly on the remaining 51 routes. The following table shows how many carriers Vueling is competing against on each route. The most recent impact was on Warsaw and Hamburg, two routes that Norwegian has revealed it will start operating next April. The Barcelona-Warsaw route will now be served by LOT, Norwegian, Vueling and Wizz Air, and joins Bucharest and London Gatwick as the most keenly contested markets served by Vueling from Barcelona.