Czech Airlines inaugurated on 11 December two new services from Prague and Košice to Bratislava. Both services, which are operated with six weekly flights utilising the airline’s 48-seat ATR 42s, will see frequency increase to 10 weekly flights at the start of the summer season.

Czech Airlines, one of the oldest airlines in Europe, celebrated its 90th anniversary on 5 June. According to its official website, the carrier has transported more than 100 million passengers since it started operations. The flag carrier of Czech Republic, which was on the point of collapse, has been recently undergoing a restructuring campaign. In March 2013, Korean Air acquired a 44% stake in the carrier, providing a lifeline for the loss-making airline, while increasing the Asian carrier’s presence in the European market. As part of the restructuring campaign, the SkyTeam member is currently undertaking a transition to a fleet of just two aircraft families, namely Airbus and ATR, as its B737-500s will be retired at the end of the winter season. Czech Airlines’ main hub is located at Prague Airport, where the carrier is the dominant player operating on 37 routes and commanding over 30% of weekly flights and seats.

The airline handled just 2.8 million passengers last year, a decrease of 34% over 2011 figures. This is mainly due to the carrier not being able to recover after the economic downturn and struggling to turn a profit, resulting in it reducing its flights by 31% and seat offering by 35%. However, the carrier is looking forward to reviving after the recent partnership with Korean Air, which led to the inauguration of several services in 2013, including the most popular new additions to airline’s network — the services from Prague and Košice to Bratislava. 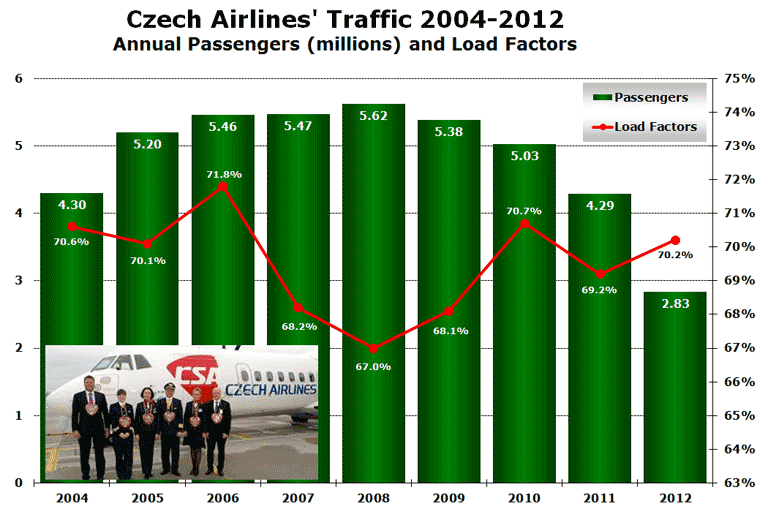 Overall, looking at passenger data between 2004 and 2012, the airline’s traffic decreased by 35%, while the seat capacity and frequencies were cut by 40% and 36% respectively. As a result of capacity reduction, Czech Airlines increased its load factor by 1% last year when compared to 2011, however this is still 9% lower than the 79% average of AEA members.

Prague-Moscow is #1 route by seats and flights

In terms of the airline’s most significant routes, the routes to Moscow Sheremetyevo and Paris CDG are the most frequently served, representing a combined frequency share of nearly 17%. The Prague-Sheremetyevo service still accounts for the majority of weekly seats (4,484) and flights (29), which increased by 13% and 7% respectively when compared to the same week in 2012. Due to Russia still being a regulated country market, the 1,675-kilometre sector is contested by just one carrier, Aeroflot (four times daily), which would seem a reasonable recipe for Czech Airlines’ long-term survival. 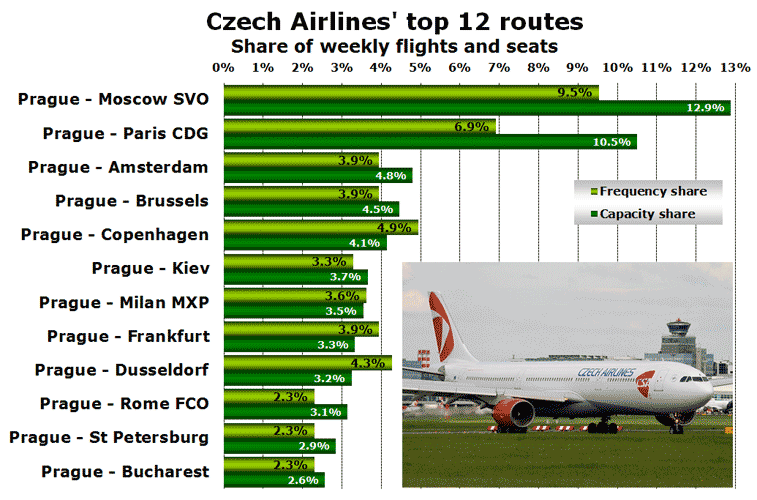 Despite reducing its seat capacity by 4%, seven out of Czech Airlines’ top 12 routes experienced capacity growth, when comparing data from this December with the same week last year. The stand out performances are those emanating from services to Düsseldorf (32%), Moscow Sheremetyevo (13%) and St Petersburg (19%), the latter becoming a new entrant onto this year’s table. On the other hand, services to Bucharest have provided the greatest capacity decrease (-21%), as a result of Czech Airlines reducing its weekly flights by 36%.

Back in the long-haul market

A total of seven routes were launched by the SkyTeam member in the course of this year. Prague, the carrier’s main base, saw a total of six route additions, of which only two are genuine, the thrice-weekly flights to Perm and the twice-weekly to Seoul. The notable long-haul service to Seoul was launched on 1 June, as a result of the recent cooperation with Korean Air. Czech Airlines, which dropped its long-haul routes in October 2009, returned to this market utilising a leased A330-300. With the inaugural of the thrice-weekly services to Perm on 31 March, the carrier now serves a total of seven destination in Russia, which is the fastest growing country market as well, mainly due to the traffic feed between Czech Airlines and fellow SkyTeam partner Aeroflot.