Nail-biting finish to first ever ‘Arch of Triumph’ competition 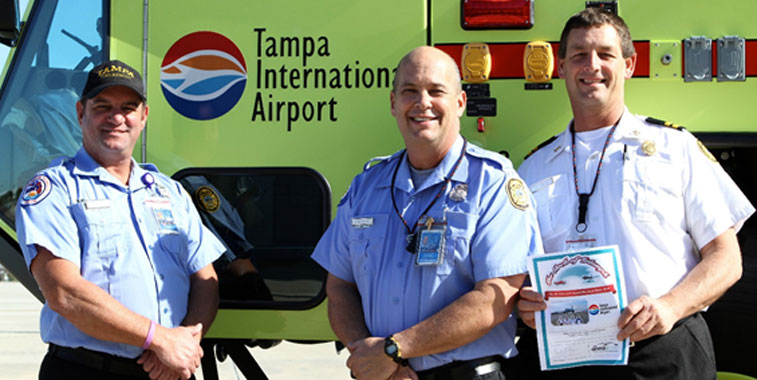 Despite last ditch efforts by our good friends in Australia, Spain and the US the last four FTWAs of 2013 were not good enough to trouble the ‘Arch of Triumph’ delivered on 29 October by fire crews at Aena’s Tenerife Norte Airport for the arrival of the thrice-weekly ATR 72 service from Casablanca by Royal Air Maroc. Aena’s airports were the most prolific of the 75 global entrants in the inaugural ‘Arch of Triumph’ competition, which saw the (predominantly) Spanish airport operator provide 14 FTWAs from 11 different airports in its portfolio. So clearly they played the percentage game in order to achieve the win. Something for other airports to consider for next year’s competition.

What the judges said about this world-beating FTWA… 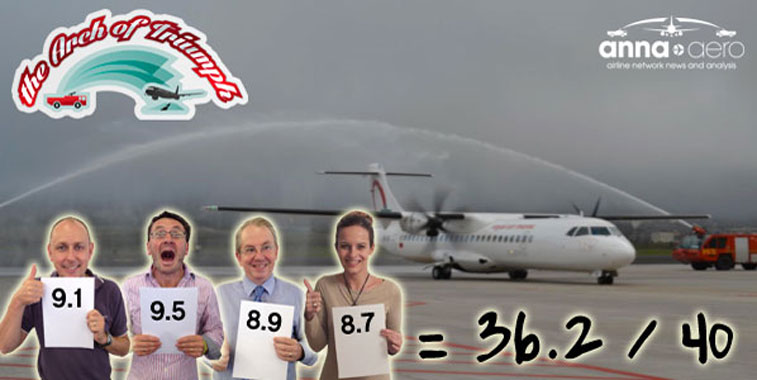 The execution of a perfect ‘Ingrid Bergman’ by Tenerife Norte’s firefighters wowed the anna.aero judges back in late-October — this ‘specialist’ arch was enough to seal the 2013 annual award and becomes the benchmark for all those looking to win the 2014 competition.

Marc: 9.1 What a cracker to start off with! I am going to be ultra-picky and say that the fact that the left-hand side tender is not visible is a minor negative (the photographer’s fault, not the firecrew) and I would have like to seen a smidge more of angle to the arch — making it dangerously close to ‘pancaking’ to use the accepted industry phrase — does not detract from an FTWA that has got my best score of 2013 so far!!

Paul: 9.5 In contrast to the other arch this week from Fuerteventura, this is not a “Canary”, but nor is it a “leaping dolphin” (although to an amateur it may resemble one). It is in fact an “Ingrid Bergman” – named for the star of the 1942 classic movie “Casablanca” because of the close resemblance of the arch’s curves to her perfectly groomed eyebrows – a gesture which will no doubt have been warmly appreciated by the Royal Air Maroc crew.

Ralph: 8.9 Almost perfect. Shame about the “missing” left-hand fire truck, but the red hatchings on the apron add a nice visual effect.

Magda: 8.7 This is so close to perfection! Deducting points for the absence of the second truck from the picture and the thick clouds.

The last week of 2013 competition did see this week’s winners Tampa push Tenerife Norte hard for overall victory of this year’s battle of the FTWAs, losing out by the smallest of margins – just 0.1 points. The Floridians will have to console themselves in knowing that there were the only airport to win twice this year and they also secured the inter-regional competition win for North America. Tampa’s week #14 title just nudged North America into a clear lead over Europe with five wins versus four, with Asia trailing in third after scoring three wins. 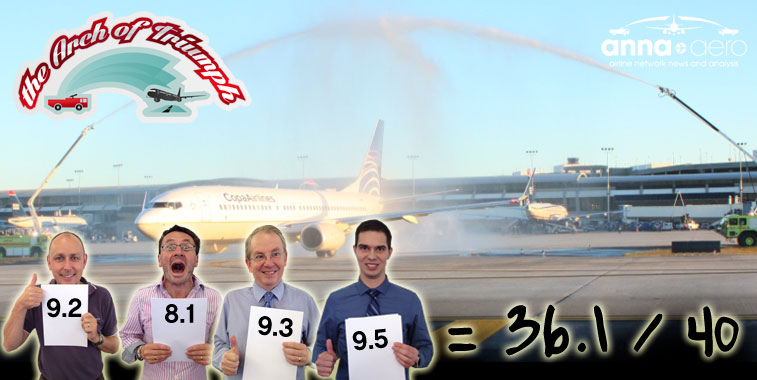 Tampa’s FTWA has split the judges this week, resulting in anna.aero’s Christmas party being cancelled.

Marc: 9.2 Talk about saving the best until last! Clearly the firefighters at Tampa took our feedback last week on-board to produce this beautifully crafted piece of FTWA art. It gets my biggest score of 2013.

Paul: 8.1 I have actually flown into Tampa and seen real leaping dolphins in the wild standing outside a branch of Hooters at Hubbard’s Marina! This is a front-of-grid arch, but it is in fact really hard to get the gold-standard “Leaping Dolphin” effect with these extended monitors.

Ralph: 9.3 Tampa Airport take a bow. Now THAT’S an arch for Copa Airlines’ first departure from Tampa to Panama City. If there had been a rainbow I would have given it a 10!

Vlad: 9.5 I’m stunned…excellent symmetry, great truck alignment, fantastic FTWA! This is close to perfection and I love it. Excellent work Steve and Oscar, this is great improvement since last week’s win! 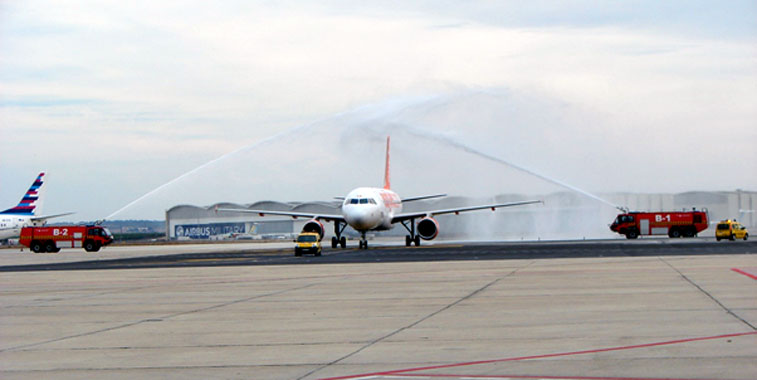 Firefighters in fire trucks or Bananas in Pyjamas? You decide…

Marc: 7.4 Get ready for an misguided cultural reference. B-1 and B-2 for me are the main characters from Bananas in Pyjamas, a TV programme that my kids watch (not a patch on Mr Tumble)…so I was confused straight away with this FTWA. That said, maybe B-1 and B-2 have to boost their annual salary with a second job at Seville Airport. I’d give up the kids TV show and stick to firefighting, as this isn’t a bad effort, especially for fruit dressed-up in their night gear!

Paul 8.0 This is a customised style of FTWA was exclusively developed to welcome easyJet route launches at this airport and is fittingly called “The Seville Orange.” Sometimes confused with “Gangnam Style” arches by the inattentive and poorly-educated, the fire truck monitors are in fact expertly twitched to resemble the altogether more artistic flamenco dancers of this great tiled city.

Ralph: 7.4 A classic case of grey-on-grey action here that would have benefited from some coloured water. It’s a pretty good arch, but there is a hint of ‘Tobleroning’ going on which may be in honour of the fact that the flight originated in Switzerland.

Vlad: 7.7 More of a triangle as the curvature of this arch is slightly visible. Although some ‘melted Tobleroning’ is happening here, this is acceptable considering the flight departed from Basel. 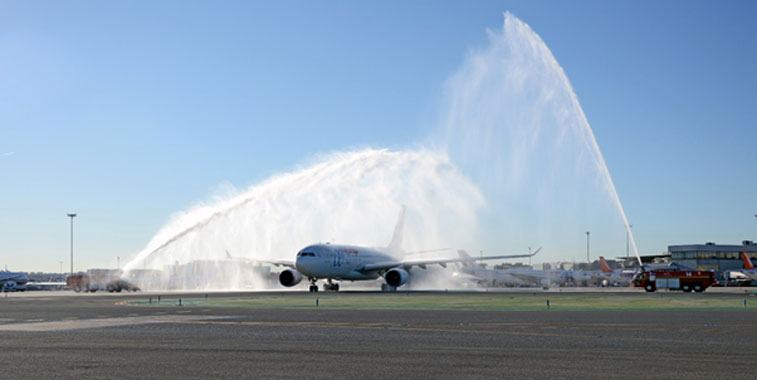 Remember, it’s the intention that counts when it comes to FTWAs (nah!).

Marc: 4.6 The folks at Aena said to me when they sent this through, “Please remember that it’s the intention what counts”. Well if the intention was to produce the most definitive ‘Big boy, Little boy’ of the 2013 competition, then the firefighters at Madrid would have walked off with the trophy.

Paul: 0.2 If there even was a name for this style of FTWA it would be something like “Picasso’s Post-Breakfast Hangover.” As I understand it, Aena’s Tenerife Norte firefighters are about to carry off this year’s ‘Arch of Triumph’ Championship overall annual prize, so it was a strange time for the Madrid crew to go surreal. Come back in 2087 guys, the world’s not ready for this sort of thing yet.

Ralph: 5.2 This looks like an attempt at recreating Brazil’s Sugarloaf Mountain in water, which would be brilliantly appropriate if AirEuropa were launching flights to Rio, but unfortunately this flight is heading for Sao Paulo instead. Drat. Next time, eh?

Vlad 3.0 I have no idea what is this meant to be. It has nothing to do with a FTWA, however, it reminds me of the Fountains of Bellagio from Las Vegas, synchronising after Andrea Bocelli’s ‘Time to say goodbye’ (check YouTube). 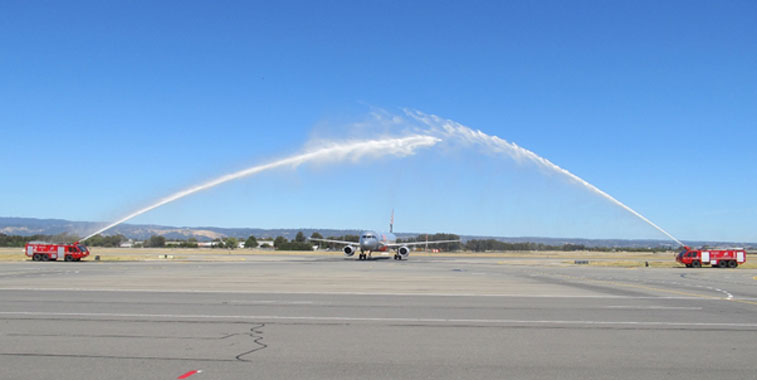 The Aussies wanted the title bad – they will have to console themselves with The Ashes win instead.

Marc: 7.8 Timing – perfect. Tender positioning – spot-on. Jet pressure – bonzer. Arch angle – not coordinated! What a shame, this could have been a world-beater…instead it falls into mid-table mediocrity.

Paul: 8.1 Rodd Sciortino, Manager National Operations, Aviation Rescue and Fire Fighting, Airservices Australia cruelly wrote to me about the narrow, lucky Australian win against the English side in cricket this week: “Just like The Ashes, it shall be ours.” Unluckily for you Rodd, our Romanian judge cheers ‘The Creator’s’ side in cricket. So the unanimous decision is that Aussie ARFF won’t get the 2013 championship. You can temporarily keep The Ashes as a soggy consolation. Don’t write your name on them in permanent marker.

Ralph: 7.7 Lovely blue sky in Adelaide to make the arch visible and if the right-hand fire truck had just aimed down a fraction this could indeed have been almost perfect.

Vlad: 7.7 Slightly more coordination from Adelaide’s firefighters would have made this FTWA a really strong contender for this week’s win. Unfortunately, this masterpiece can’t secure more than the second place.