2013 ‘Arch of Triumph’ winners show 2014 contenders how to celebrate 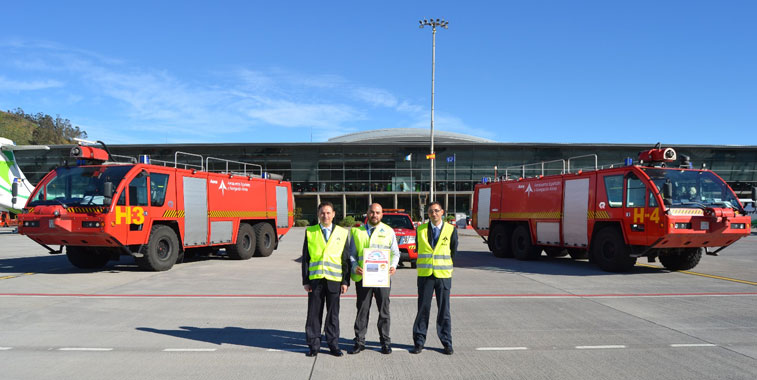 Vehicle H3 was one of the tenders which helped Aena’s Tenerife Norte Airport scoop the first-ever ‘Arch of Triumph’. Also in the picture are (left to right): Airport Director Pedro Soriano; Head of Operations, Services and Security Cristo Pimentel; and Airport Deputy Director Antonio Robledo.

2013 was a landmark year in many ways in aviation — first flight of the A350 XWB, Emirates and Qantas partnership, Darwin Airline starting flights from Cambridge Airport — to name just a few. However none of these events were as significant as the introduction of anna.aero’s new feature – ‘The Arch of Triumph’. This popular addition to our weekly output has already generated the same fervour as ‘Cake of the Week’ amongst the marketing teams of the world’s airports. Firefighters from around the world have now been drawn into the airport marketing spotlight and a new lexicon bespoke to the competition has been created, with phrases like ‘Tobleroning’ and ‘Leaping Dolphins’ now common parlance around airport board rooms. This week sees the start of the 2014 competition with seven fire truck water arches (or FTWAs) scored and reviewed by anna.aero’s expert panel of judges. So remember everyone…Keep Monitoring! 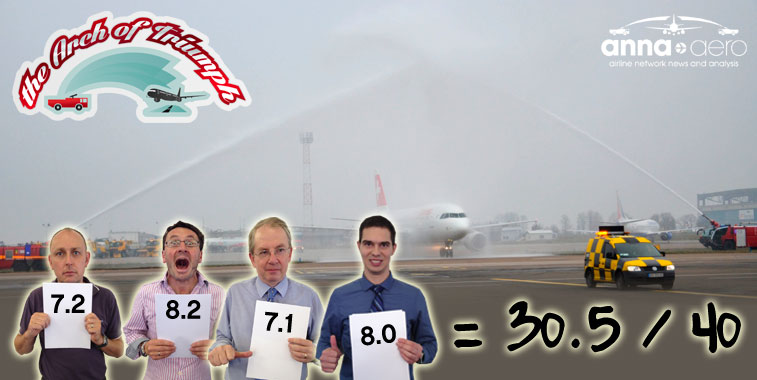 Marc: 7.2 At the risk of stating the obvious joke with a Switzerland-originating route, there is a hint of some ‘Tobleroning’ going on here, fortunately it’s only a mild outbreak of the FTWA disease being experienced at Belgrade.

Paul: 8.2 This looks like a ‘Toblerone’ – possibly with a hint of ‘Kiev’ – not a nice flavour combination – but in fact this arch is called a “Nikola Tesla” and is based on the wave patterns of the Serbian’s Alternating Current design. As we all know, AC is a system where the flow of electric charge periodically reverses direction. What is less well-known is that the airport is named for this style of FTWA, rather than the pioneering inventor.

Ralph: 7.1 Two fire trucks, a ‘follow me’ vehicle, the SWISS logo clearly visible on the tail and an ‘arch’ that does at least meet solidly in the middle. I prefer to think of the ‘pointiness’ as a nod to Belgrade’s Museum of Contemporary Art, rather than anything to do with Swiss chocolate.

Vlad: 8.0 A ‘Tobleroning’ arch usually doesn’t score more than 7.5, however, considering the flight was operated by SWISS from Geneva, this FTWA was performed in the true spirit of Switzerland. 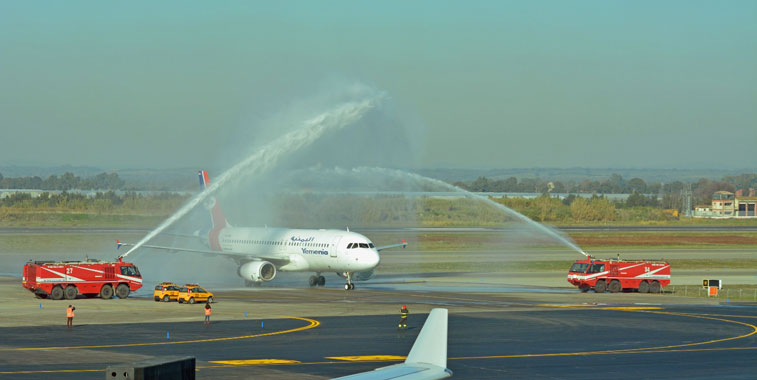 Marc: 5.7 You would think that the firefighters at Rome Fiumicino would be gagging to show-off their skills with a classic “Roman Cross” in their first FTWA offering…but have instead elected to produce a “Big Boy, Little Boy”. Golden opportunity to stake a claim as an early 2014 contender missed methinks.

Paul: 9.2 As usual, my fellow judges have shown that they don’t know a great FTWA from an average one. This style of FTWA is known locally as a “Vitruvian Man”, named after the famous work by the airport namesake Leonardo da Vinci. Nice one amici miei.

Ralph: 5.1 Nicely matched fire trucks, a lovely sunny day in Rome, but sadly not an arch. Still, nice to see that this was clearly a major event as there seem to be at least three other photographers on the apron.

Vlad: 5.5 Yemenia’s inaugural from Sana’a was welcomed by Rome’s fire fighters with a sloppy ‘South Korean dance’. The position of the photograph was great, but the coordination of the two monitors leaves a lot to be desired. 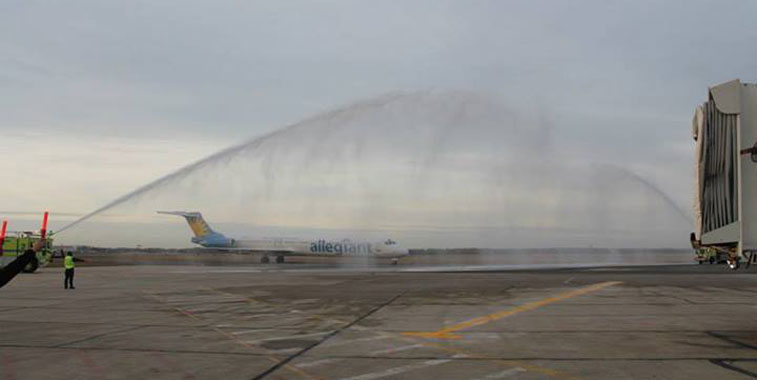 Maybe the intended target for the FTWA was the bloke on the apron and not the Allegiant Air aircraft?

Marc: 3.6 One of the reasons I don’t mind coming back into work after the holidays is that I love my job…and scoring FTWAs helps a lot in terms of my enjoyment. Imagine my disappointment when I was presented with this effort as the first FTWA of 2014 — almost as bad as that pair of novelty socks I received at Christmas.

Paul: 5.1 Islip, or rather Long Island MacArthur Airport, is named after General Douglas MacArthur. In his farewell address to Congress, the popular MacArthur received 50 standing ovations. For pretty obvious reasons this FTWA receives about 50 less than that, but I’ll award an extra point because we salute both the airport and Allegiant for showing great enterprise.

Ralph: 4.2 Phil Spector may be famous for his “wall of sound” production style in the 1960s but Islip Airport appears to be going for a “wall of water”. Having the airbridge obscure the fire truck is a rookie error.

Vlad: 4.0 Neither of the trucks are properly displayed and the photographer chose a poor position. I have awarded this FTWA more than it clearly deserves, mainly because it was the first water arch salute of the year. 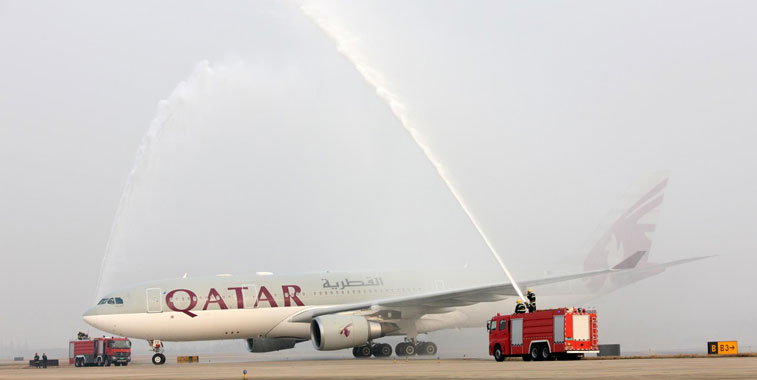 China Crisis? FTWAs for Qatar Airways in China tend to be below par.

Marc: 3.7 This is only the fourth FTWA anna.aero has received from Chinese airports. While this one is pretty bad, it’s not as bad as the one we had for another Qatar Airways launch (to Chengdu in September) when that particular FTWA scored just 2.1 from me. You would think that attracting a MEB3 carrier to your airport would be worthy of a bit of FTWA practice!!

Paul: 5.9 Oh come on. This is arch is not as bad as it looks. Had the two monitors been just slightly better coordinated, and met in the middle, they would have completed a style known locally as “The Hangzhou Bay Bridge.” But they didn’t. So it’s not.

Ralph: 4.8 Well the angle is pretty good as both fire trucks can clearly be seen, and there’s certainly no shortage of pressure in the right-hand truck, but unfortunately the arch is not complete, and with such a grey sky there’s not much chance of a rainbow to liven things up.

Vlad: 4.0 This FTWA would have been too big even for an Antonov An-224, and it looks like this A330 made it through without getting even remotely wet. 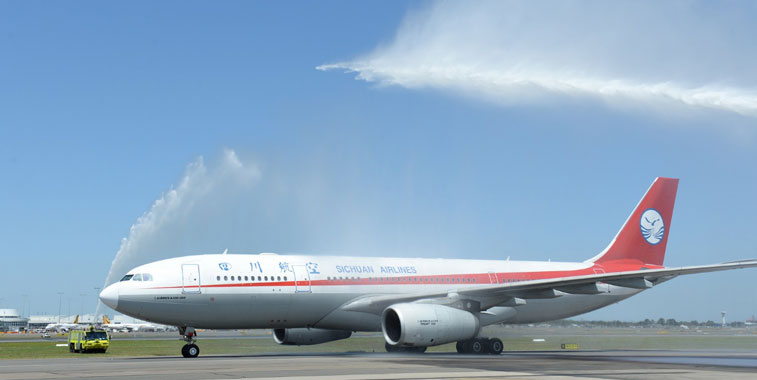 With FTWAs like this, it’s no surprise that Australasia is yet to win any of the weekly awards, despite this being the region’s fifth entry so far.

Marc: 4.1 “Keep a look out for the big red plane from China, that’s the one we have to do the water arch for…ah streuth…there it is…quick start up the water cannons…”

Paul: 5.0 One truck is parked on the lawn, the other monitor is seemingly directed from the TV room of the fire station (although I’m told the cricket wasn’t worth watching). Airport fire chiefs give this style several names, but none we can use in a news service which might be seen by young children and easily startled animals.

Ralph: 3.6 Sichuan Airlines’ branding has an ‘old school’ feel about it with the airline’s name in all capitals and a very dull san serif font. And the red flash down most of the windows is also reminiscent of older airline colour schemes. As for the FTWA, the right hand half looks alarmingly like a ground-to-air missile that has just been launched. And the arch has an alarming gap in the middle! But it’s a nice blue sky confirming that Sydney’s weather is just lovely at this time of year. Shame for England’s cricketers that it couldn’t have rained for five straight days at the beginning of 2014.

Vlad: 3.9 From this angle I would say we have a ‘Big Boy, Little Boy’, which is due to the visible truck that either didn’t have enough pressure in the cannon or the firemen were playing ‘Angry Birds’ on their iPhones and forgot that the aircraft was approaching. 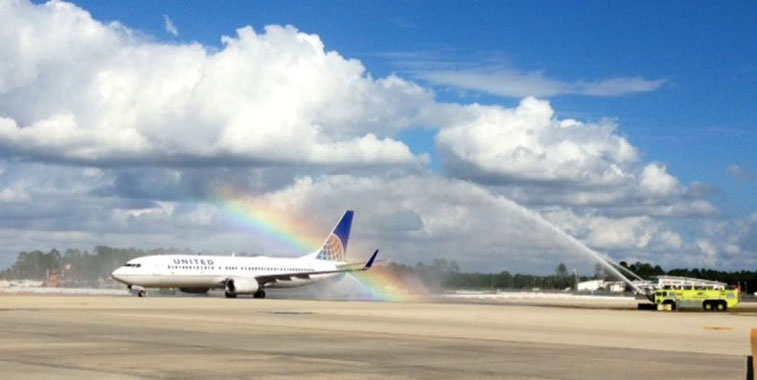 Marc: 2.1 It’s a good job I received this after the Allegiant FTWA, or else I would have compared this to my ridiculous pair of Christmas novelty socks instead. At least five points have been deducted for the photographer’s poor positioning on this one.

Paul: 4.3 This is both a very fetching and very confusing scene. The fire trucks seem to be chasing the aircraft away and, if you were to follow this rainbow, you’d probably be ingested by the United 737-800. As for the cloud-strewn sky, it’s reminiscent of the artwork used on “Clouds”, the second studio album by Canadian singer-songwriter Joni Mitchell, released in May 1969 (Thanks for that contemporary reference point again there Paul – Ed).

Ralph: 5.3 I always give extra marks for rainbows as they’re just sooooooo pretty. But this does look like only half an arch and the fire truck looks as if it’s trying to inject the cloud with more potential moisture.

Vlad: 3.5 This arch was so horrible that a rainbow decided to appear from nowhere to welcome United Airlines’ flight from Denver with a ‘rainbow arch salute’. Fort Myers’ FTWA wouldn’t score more than one point, but I added 2.5 extra for the rainbow. 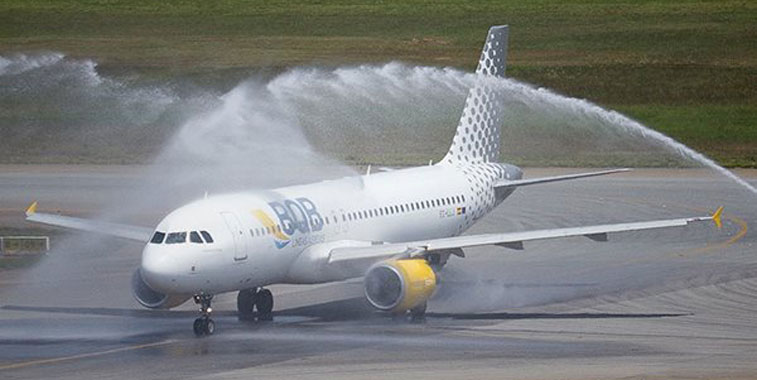 South America’s first FTWA entry gets a creditable score for this effort.

Marc: 6.6 This is our first entry from a South American airport (Sao Paulo Guarulhos) and as first attempts go it’s not bad…scoring well above the 2013 average of 5.7.

Paul: 7.0 Sao Paulo is also known as “Sampa” or “Cidade da Garoa” or “city of drizzle” – but not because of its famously-unreliable weather system, but purely because of the casual, sprinkled-nature of the Guarulhos FTWAs. You either love them or hate them. I think they are an absolute shower.

Ralph: 7.1 Former Vueling A320s seem to be popping up in unusual places these days. I saw two ready to be broken up at Kemble Airfield in the middle of the Cotswolds countryside over New Year, and now here’s one helping BQB Airlines to grow its international network. As for the FTWA, it’s fairly symmetrical but is less of an arch and more of a double-hump. Maybe we can nickname this ‘the camel’. Do they have camels in Brazil?

Vlad: 6.0 Even though Gangnam Style is not popular anymore (1,871,483,026 views on YouTube), firefighters can’t stop listening to it while executing FTWAs. Ironically, it became popular at South American Airports as well.