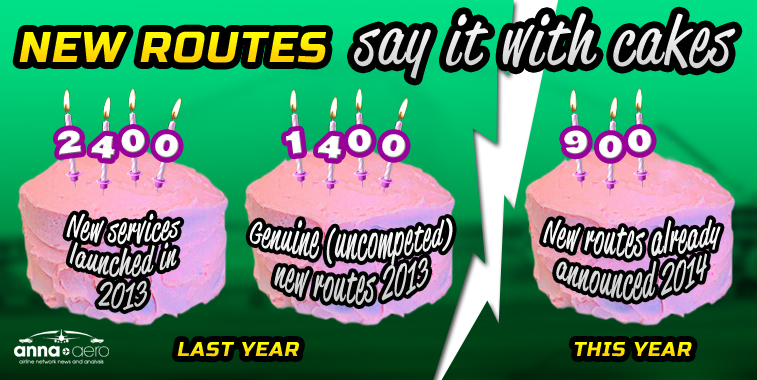 An average of 46 new airline services were launched each week in 2013 resulting in a lot of cake baking. So far anna.aero already knows about 900 planned new services for 2014, but expects that to once again rise to well over 2,000 during the course of the year.

According to anna.aero’s New Routes Database, 351 of the world’s airlines launched over 2,400 new services across 172 countries in 2013, which works out as an average of around 46 new services per week. Just under 1,000 of these new services were on routes already operated by at least one other carrier, while the remainder were genuinely new routes. The average frequency of the services launched where there was competition, was 5.5 flights per week, while on the genuinely new routes the average weekly frequency was just 3.6.

Regular readers of anna.aero will not be surprised to discover that the airline that started the most new services in 2013 was Ryanair, with 180. By Ryanair standards this was actually a quiet year for new route launches, but they still beat their nearest rival, Norwegian, by almost 100 routes. 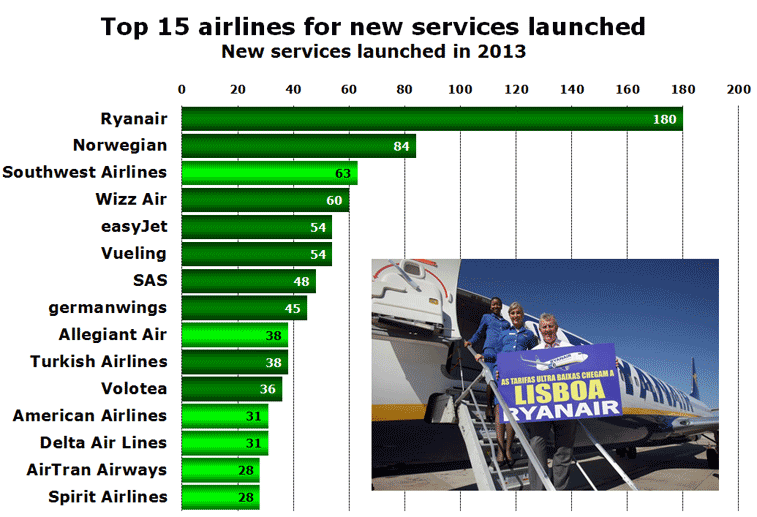 The 2,410 new services in our database involve 4,820 airports, one at each end of the route. Analysis by country reveals that despite relatively little overall traffic growth, US airports still welcomed more than double the number of new services in 2013 than the airports of any other country. Four of Europe’s five ‘FIGUS’ countries filled the next four positions, with France being beaten by both Russia and China. European countries (in dark green) scooped 10 of the top 15 positions. 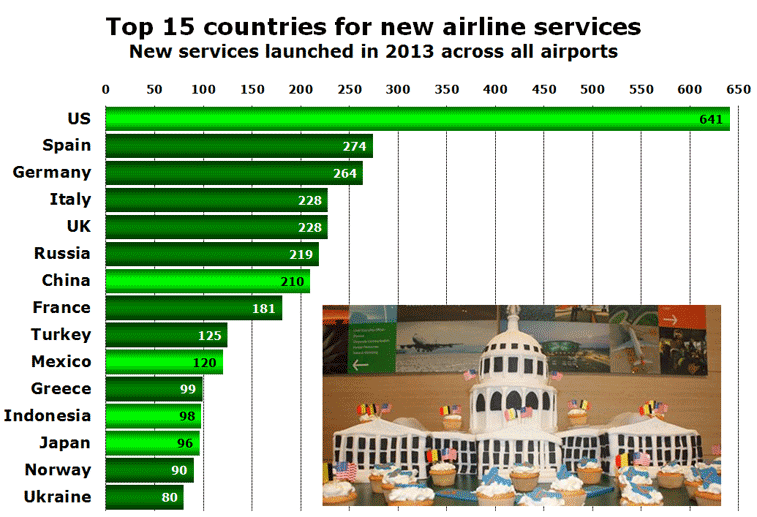 According to the BBC, the next bloc of exciting, fast-growing countries have been christened the ‘MINT’ countries, representing Mexico, Indonesia, Nigeria and Turkey. Three of these four countries feature in the top 15 for new air services, Nigeria being the exception.

Another fascinating piece of trivia is that Boeing aircraft were involved in almost 1,000 new service launches, while Airbus aircraft were involved in almost 900. Embraer jets started just a handful more routes than Bombardier jets, while among turboprop manufacturers ATR appears to have just beaten Bombardier, with a combined total of around 100 new routes, representing just 4% of all new services launched.

Over 900 new services already announced for 2014

As we start 2014, our database currently has details of over 900 new services involving 150 airlines, that are scheduled to start before the end of the year. Seven airlines, all based in Europe, have already indicated their intention to start over 30 new services this year, with Vueling, germanwings, SAS and Ryanair leading the way, followed by Aegean Airlines, Norwegian and easyJet. Etihad Airways and Qatar Airways have both revealed plans for eight new services this year, well ahead of Emirates with just three.

Interesting battles look set to be fought between Ryanair and Vueling as both plan to open bases in Brussels Zaventem and Rome Fiumicino, while germanwings continues to absorb Lufthansa’s non-hub services, particularly from Düsseldorf this year. Norwegian is starting mini-bases in Barcelona and Madrid, and starting transatlantic flights from London Gatwick. The launch of Etihad Regional services in Europe from the start of the summer season will also be observed with interest, as will Wizz Air’s latest Central European base in Craiova, Romania. Turkish Airlines will continue to grow in Istanbul, but is currently planning to add more routes from Sabiha Gökçen than from Atatürk.