By Ralph Anker in Berlin airberlin remains something of an oddity among Europe’s biggest carriers. Founded as a charter/leisure airline back in the late 1970s, it has grown both organically and through acquisitions (dba and LTU), evolved from a low-cost airline into a full-service carrier, joined the oneworld alliance and now has Abu Dhabi-based Etihad Airways as its major shareholder. However, the airline has struggled to be consistently profitable, and still appears to be trying to be all things to all people by operating short-haul, medium-haul and long-haul routes, having a fleet that ranges from Q400s to A330s, operating year-round high frequency business routes, as well as low-frequency, seasonal, leisure routes.

In 2013 the airline cut its fleet by 12 aircraft (to 143) and saw passenger numbers drop by 5.4% to 31.54 million. However, load factor reached an impressive 84.9%, an increase of 1.3 percentage points on 2012. Looking at planned capacity data for 2014 suggests that airberlin hopes to grow once more this year, although at a modest rate. 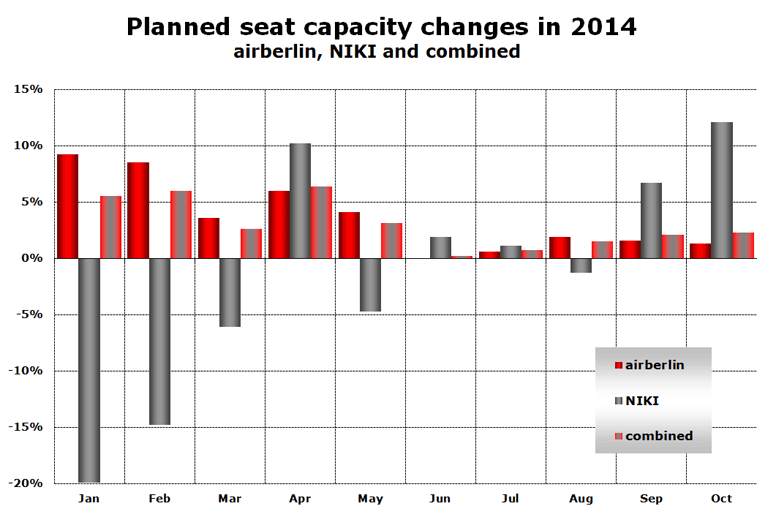 Source: Innovata / Diio Mi for representative weeks in each month of 2014 compared with same week in 2013

This analysis looks at airberlin and its Austrian subsidiary NIKI separately, and also combined. The impact of the re-timing of Easter back into April this year can clearly be seen, especially in the case of NIKI, with its greater focus on leisure routes. After April, capacity growth for the two airlines combined averages just under 2%.

Despite the modest growth in capacity, very few new routes are planned for 2014 while around 30 routes have been dropped. The increase in capacity has therefore been achieved by an increase in average weekly frequency on many routes. The airline retains a diverse network, but a number of routes have been axed from the schedules, including the termination of all services at nine airports. Fifteen routes have been dropped that operated with at least three weekly flights last summer, with six of these being links to the airline’s virtual hub in Palma de Mallorca.

The nine airports to have lost all airberlin services this summer include five in Germany (Erfurt, Heringsdorf, Memmingen, Weeze and Zweibrücken), two in Portugal (Lisbon and Porto), and one each in Italy (Palermo) and Spain (Asturias). Palermo, with the loss of 10 weekly departures is the hardest hit in terms of weekly frequency loss.

The only confirmed new routes being launched by airberlin (as opposed to NIKI) this summer are Düsseldorf to Madrid, Düsseldorf to Calvi (in Corsica), and Munich to Lanzarote (Canary Islands). From Vienna, NIKI is adding new routes to Larnaca, Madrid and Malta.

Analysis of the weekly seat capacity being offered by airberlin from individual airports shows that the airline is growing this summer at 11 of its top 15 airports, with Palma de Mallorca being the most significant exception, given that it is the airline’s third biggest base. Antalya’s fall reflects the growing competition in the Turkish market with the likes of SunExpress Deutschland entering the Antalya market, and doubling its seat capacity this summer between Antalya and Germany. The almost 20% increase in capacity at Frankfurt is almost entirely down to airberlin increasing frequency on just two routes, to Berlin Tegel and Palma de Mallorca. 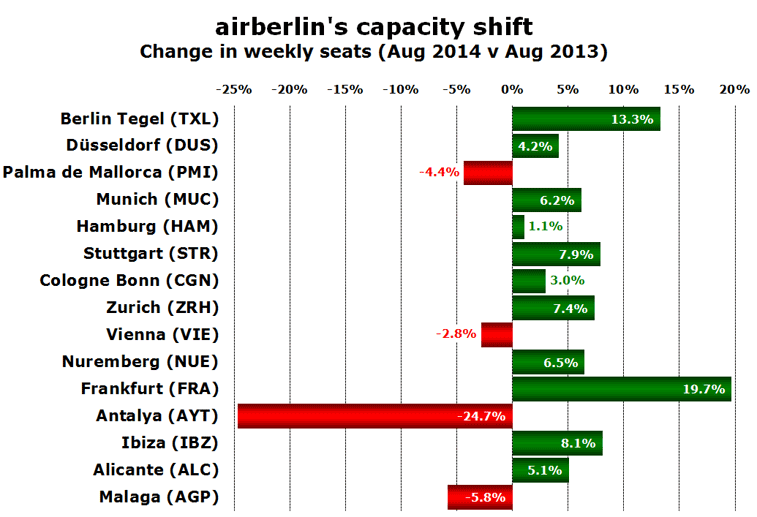 One of airberlin’s biggest challenges is the seasonality of its operations. Comparing weekly seat capacity in February (off-peak) with the previous July (peak) for Europe’s seven biggest airline groupings, reveals that airberlin is beaten only by Ryanair for the difference (in percentage terms) between these two periods. This reflects the airline’s reluctance to give up its many low-frequency, seasonal leisure routes that it considers a core part of its network strategy. However, this level of demand seasonality is incompatible with the airline’s ‘full-service’ cost structure, resulting in the airline’s poor level of financial performance in recent years. 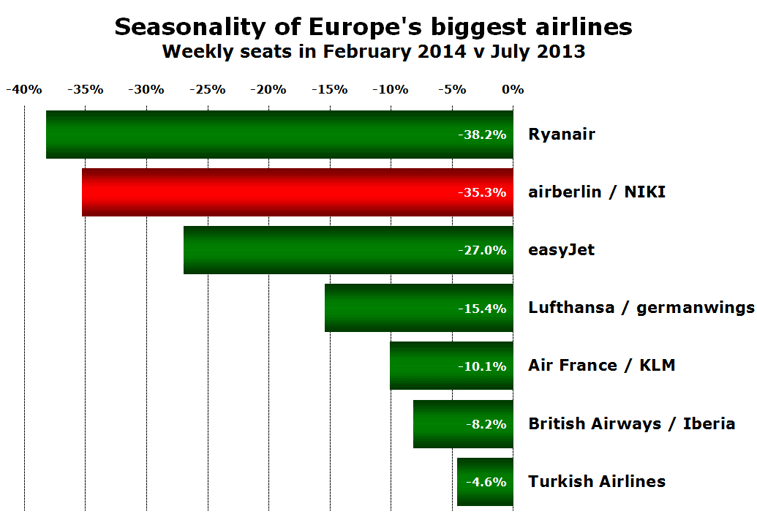 This week airberlin jointly hosted a spectacular press conference in Berlin with its major shareholder Etihad Airways, to confirm Etihad’s long-term commitment to the relationship, and to unveil an A320 painted in a mix of the airlines’ corporate colour schemes. anna.aero was there and listened with interest to the presentations made by both airlines. With airberlin’s aspirations to be a global airline, its fleet of just 14 A330s is insufficient to give it much of a presence in the long-haul market. In fact, the widebody aircraft are used extensively on some of the Palma routes in summer as well as the airline’s modest transatlantic network, and flights to Abu Dhabi.

The codeshare arrangement with Etihad allows airberlin to access 33 African, Asian and Middle East, destinations via Abu Dhabi. Emirates and Qatar Airways will be competing for this traffic via their well-connected hubs in Dubai and Doha, while Lufthansa serves around 20 destinations in Asia non-stop from its Frankfurt hub. Lufthansa has been active in its attempts to restrict the number of German airports into which the MEB3 carriers can operate. The following table reflects the number of weekly flights available from each carrier into their respective hubs from Germany.

The UK now a Q400 niche market of just one route

Back in the summer of 2006, airberlin operated over 20 flights per day from London Stansted to 12 destinations, including domestic routes to Belfast City, Glasgow and Manchester. After the domestic routes were abandoned the following year, the German routes were gradually phased out, or moved to London Gatwick (and then phased out), leaving airberlin with just a single UK service, from Stansted to Düsseldorf, flown up to thrice-daily by the airline’s Q400s operated by LGW (that’s Luftfahrt Gesellschaft Walter and not London Gatwick). These Q400 flights are the only daily turboprop operation at London Stansted, creating further uncertainty about the future of the service. However, airberlin passengers are able to access a wide range of UK services thanks to the airline’s membership of the oneworld alliance, enabling it to codeshare on British Airways’ network of flights between London Heathrow and Germany, as well as domestic connections at Heathrow to other UK destinations.