Leak of the week: flynas looks to launch long-haul operations in 2014 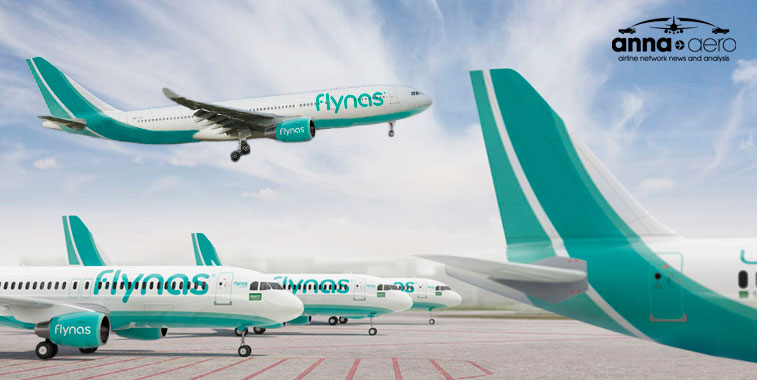 Promising a shake-up of Saudi Arabia’s aviation landscape: locally-based low cost carrier flynas is investigating launching long-haul services with A330s, to destinations in Europe, including the UK and France. It currently operates 19 A320s.

Some have tried and failed (Oasis Hong Kong Airlines; Viva Macau Airlines; Zoom), some are still doing it and seemingly making it work (Air Asia X; Jetstar Airways; Norwegian; Scoot) and some have talked about it but not quite made the leap of faith (Ryanair; Southwest Airlines). Saudi Arabian airline flynas (formerly nasair) is looking to become the next LCC to move into the long-haul, low-cost market with new services to Europe mooted, having recently applied for access from Riyadh into the UK, namely to Manchester and London Gatwick. One other UK airport also confirmed to anna.aero that it had been in discussions with flynas.

As well as a large domestic network, flynas currently flies overseas to Egypt, Jordan, Kuwait, Lebanon, Sudan, Turkey and UAE, but along with the UK, points in France have also been suggested, as well as entry into the new country markets of Iran and Morocco. In addition, the airline is apparently planning to re-launch services to India (which it flew to Mumbai, Delhi, Kochi and Kozhikode at various times between May 2010 and March 2012) and Pakistan (which it flew to Islamabad, Karachi, Lahore and Peshawar at various times between September 2008 and January 2013). The appraisal of these two re-launched country markets may well be to provide onward destinations via Saudi Arabia for the prospective Manchester and London Gatwick services, as well as those selected in France.

Looking at the Innovata / Diio Mi schedules for the first week of April, there are currently only two players in the UK-Saudi Arabia market — British Airways and Saudi Arabian Airlines. Until Saudia launches its thrice-weekly operation to Manchester on April 1, the existing 28 weekly services are concentrated at the UK end on London Heathrow. If Manchester is successful in luring Riyadh flights this year with flynas, it will have secured connections to both of Saudi Arabia’s biggest two airports in the space of 12 months. While Saudia flew to Manchester until December 2009 (operating via Geneva), there have been no regular scheduled services to Saudi Arabia from London Gatwick (in the last 10 years according to Innovata / Diio Mi data).

In France, there is considerably less capacity being flown between the two country markets, with Saudia flying 11 times weekly (Jeddah, seven; Riyadh, four) and Air France operating just four times weekly (Riyadh), and all flights being flown into Paris CDG. Whether flynas will be allowed to fly to the French capital’s main airport, granted access to the smaller Paris Orly or perhaps to regional points like Lyon, Nice or Marseille will be governed, of course, by the bilateral between France and Saudi Arabia. Watch this space to find out first!