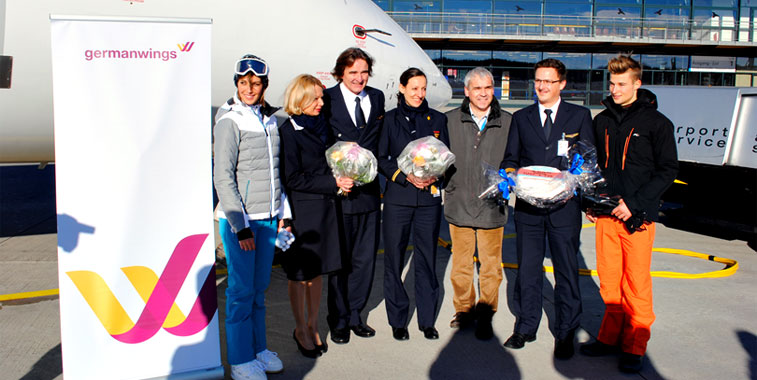 Apart from taking over many Lufthansa routes, germanwings is also adding new routes to its network, such as this seasonal winter service from Hamburg to Memmingen, which launched in December. germanwings’ weekly seat capacity will be up almost 50% next summer thanks to Lufthansa’s on-going transfer of its non-hub services from German airports.

The German air travel market continues to be impacted by the government-imposed ‘air travel tax’, and the fact that the country’s second biggest carrier (airberlin) continues to find profits elusive and reduced its fleet by 12 aircraft in 2013, resulting in a 5% reduction in passengers. Meanwhile, Lufthansa continues the process of handing over all of its non-hub flying from non-hub airports to its low-cost subsidiary germanwings. This year will see major changes at the airline’s Düsseldorf base, as Lufthansa relinquishes its leading position at the airport to archrival airberlin.

Analysis of currently reported schedule data, for the leading airlines serving the German market, reveals which are planning to increase capacity most across German airports during the peak summer month of July.

Lufthansa (including germanwings) and airberlin are apparently planning capacity growth of between 2% and 3%, which is significantly above the passenger growth at German airports in 2013, which in the first 11 months of the year averaged just 0.6%. Fast-growing airlines outside of these top seven carriers are Norwegian (+92.7%), Aegean Airlines (+41.7%), SunExpress (+31.8%), Aeroflot (+26.6%) and Vueling (+25.5%). Overall, for all airlines in the German market, capacity growth for next July is currently planned at, coincidentally, 0.6%.

In 2013, there were 18 airports across Germany which handled more than one million passengers. Lufthansa was the leading airline based on scheduled seat capacity at eight of them, with its low-cost subsidiary germanwings leading the way at two other airports. airberlin was #1 at just two airports, Berlin Tegel and Nuremberg, though it fills the runners-up spot at half the airports analysed. Ryanair came top at four airports, while easyJet (Berlin Schönefeld) and Wizz Air (Dortmund) were the leading carriers at one airport each.

In some cases the second ranked airline is a long way behind the first (such as at Frankfurt Hahn and Weeze), while at Düsseldorf the difference between Lufthansa and airberlin is very small.