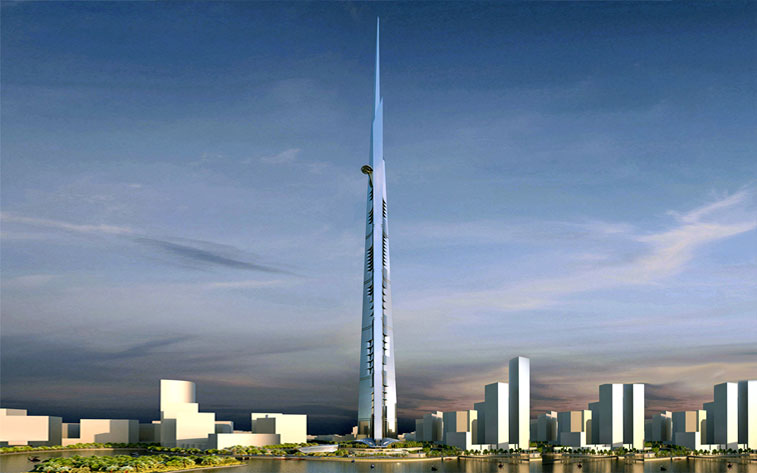 The Kingdom Tower is under construction in Jeddah. At 1,007m (over three times the size of The Shard in London) and with 186 floors, the building will become the world’s tallest and the first to surpass one kilometre in height. By the time it’s completed in 2019, Saudi Arabia’s airports may well have achieved their own milestone of breaking 100 million annual passengers.

anna.aero last looked at the Saudi Arabia (the fifth largest country by population in the Middle East after Egypt, Iran, Turkey and Iraq, with around 30 million people) country market over four years ago in 2009. The country’s airports ended that year by delivering close to 45 million annual passengers — however, based on average growth rates over the past nine years, 2013 figures are forecast to break 70 million for the first time. 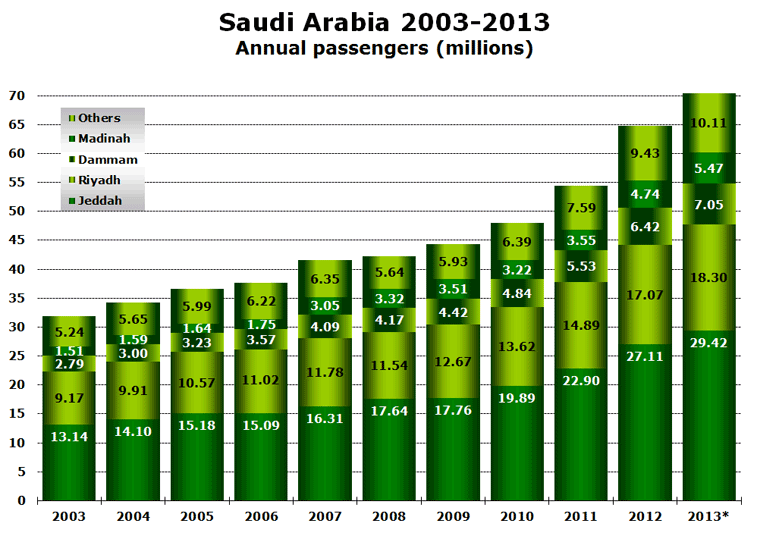 The country’s four main airports — Jeddah, Riyadh (the capital city), Dammam and Madinah — have grown on average by over 10% each year since 2003, with the latter averaging the highest annual growth of nearly 16% in that period. The nation’s remaining 24 airports, as reported by General Authority of Civil Aviation (GACA), have posted average growth figures of 7.2% over the 2003-2012 period, increasing from just over five million annual passengers in 2003 to a projected 10 million in 2013.

Looking at the Innovata / Diio Mi schedules, the total weekly seats across Saudia Arabia in 14-20 January versus the same week in 2013 show an impressive 17.7% increase to over 830,000 weekly seats. However, for the country’s top 12 airlines in terms of seats, their annual increase outstrips the total market growth, coming in at 18.6% year-on-year. Their share of the overall market has increased slightly, up from 86.3% to 86.9% in the last 12 months. 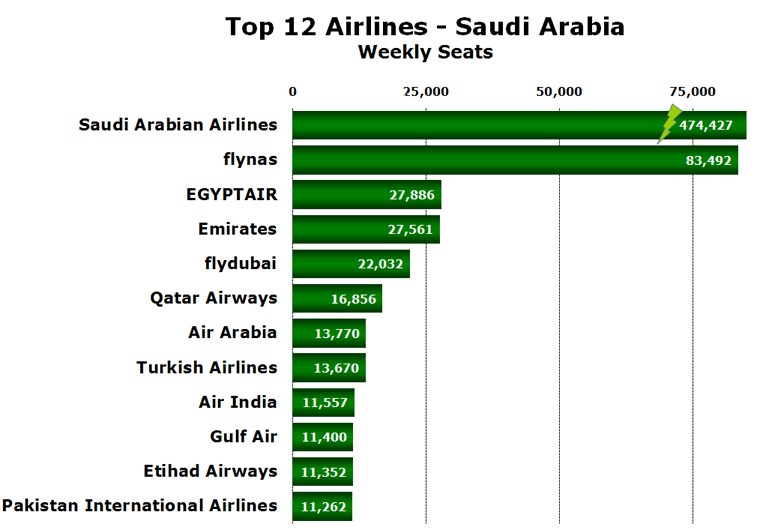 No surprises in terms of the largest carrier in Saudi Arabia, which despite being nearly six times larger than the #2 carrier flynas (formerly NASAIR), has managed to grow its weekly seats by 15.6% in the past year. With a net increase of over 60,000 weekly seats year-on-year, Saudi Arabian Airlines’ annual growth on its own would make it the #3 carrier in the market. However, LCC flynas is the fastest growing airline in Saudi Arabia in the Top 12, adding nearly 52% extra seats in this week when compared to the same week last January. New routes, including those from Taif to Kuwait City, Riyadh and Dammam, as well as Madinah to Dammam, Giznan, Jeddah, Amman, Istanbul Sabiha Gökçen and Hatay, have helped to deliver this spike in activity. Only one of the top 12 airlines has reduced its weekly seats — namely Pakistan International Airlines — which has trimmed its schedules by 6.3%, a move which has seen its tumble from the sixth largest carrier in Saudi Arabia to #12.

Looking at the Innovata / Diio Mi schedules, the Top 12 biggest routes across Saudia Arabia show an impressive 18.6% annual increase to nearly 210,000 weekly seats. Their share of the overall market has marginally increased, up from 24.7% to 24.8% in the last 12 months. The biggest two routes, linking the capital Riyadh with Jeddah and Dubai have both posted modest declines (-1.4% and -0.1% respectively) in the past 12 months, with the former dropping by five weekly services and the latter by six (presumably something to do with ongoing runway works at Dubai Airport). 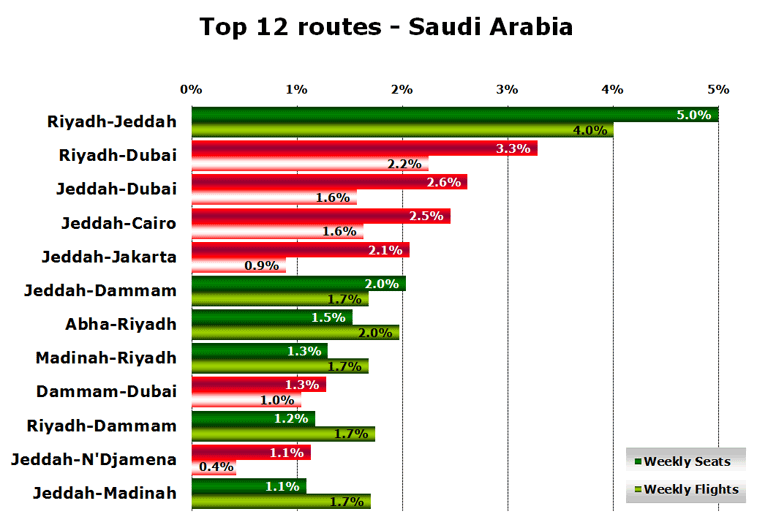 The new route between Jeddah and N’Djamena in Chad is not only a new entrant to the Top 12, but as the service did not operate this time last year (according to Innovata / Diio Mi schedules) it is therefore the fastest growing city pair too. Seats between Jeddah and Jakarta have grown by 61% since last January (flights up 68% from 25 to 42 weekly services), while #12 route between Jeddah and Madinah has witnessed a 30.4% increase in seats and a 21.2% hike in weekly flights over the same period, due to the start of flynas’ double-daily services on 12 December.