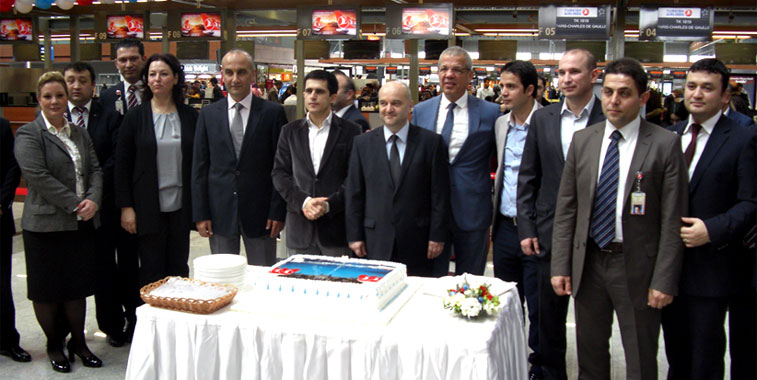 Turkish Airlines’ decision to make Istanbul Sabiha Gökçen a second base was celebrated in some style at the airport on 31 March 2013. In the last 12 months, the airline’s network at the airport has grown from nine to 30 destinations, while weekly flights have increased by 180%.

Figures published this week by DHMI show that Turkey’s airports processed 150.2 million passengers (including transit passengers), up almost 15% on last year’s figure of 131 million. This means that Turkey has now passed Italy to become Europe’s fifth biggest passenger market after the UK, Germany, Spain and France. Based on current growth rates Turkey could even overtake France as soon as this year to move into fourth place.

Istanbul Atatürk Airport passed the 50-million passenger mark, growing by 14%, while the city’s other airport at Sabiha Gökçen, grew by a phenomenal 27%, and handled well over 18 million passengers, thanks both to Pegasus Airlines’ on-going growth, but also Turkish Airlines’ decision to make the airport a second base for its own operations. Turkey currently has 14 airports handling more than one million annual passengers, and all of them grew in 2013. 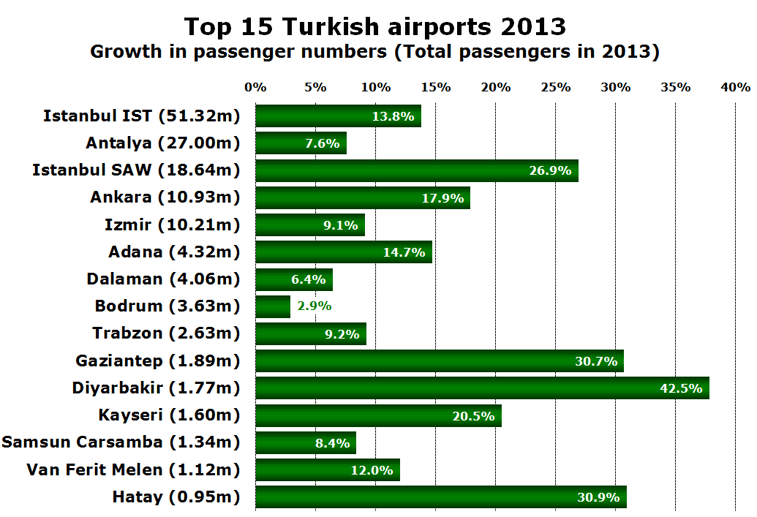 Analysis of growth during the course of the year shows that passenger numbers rose by more than 12% in every month except for July, when growth was a more modest 6.5%. This may be related to the high-profile protests that took place in Istanbul at the end of May and beginning of June.

Turkish Airlines continues to be Europe’s fastest-growing major legacy carrier. During 2013 it started service to 25 new destinations from Istanbul Atatürk as summarised in the following table.

According to Innovata / Diio Mi data for January, Turkish Airlines now serves 215 destinations with non-stop flights from Istanbul Atatürk, up from 196 this time last year. The airline’s only global rival for such a diverse network from a single airport is Delta Air Lines’ Atlanta hub, which, according to the same data source, serves 214 destinations non-stop, an increase of seven from the same time last year.

Confirmed new routes for Turkish Airlines from Atatürk for 2014 so far include Boston, Montreal and Rotterdam, though anna.aero can reveal some additional new routes.