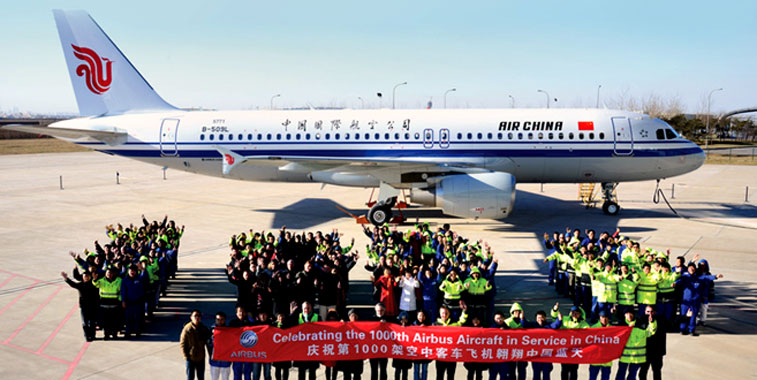 On 23 December, Airbus delivered its 1,000th aircraft in China with the handover of an A320 to Air China. Commenting on the achievement, Eric Chen, CEO of Airbus China, said: “I couldn’t have imagined that we could have 1,000 Airbus aircraft in service in China when I joined the company 20 years ago. Airbus is a great company with attractive cultural diversity, technological innovation and a comprehensive product range. That is why we’re celebrating this milestone today.”

An impressive 1,275 airframes were delivered to worldwide airline customers by Airbus and Boeing last year, turning 2013 into a record year. While the 2012 winner managed to further improve its performance, as it delivered 48 units more than in the previous year, Airbus improved its delivery record by 38 airframes, passing the 600 annual deliveries milestone for the first time. 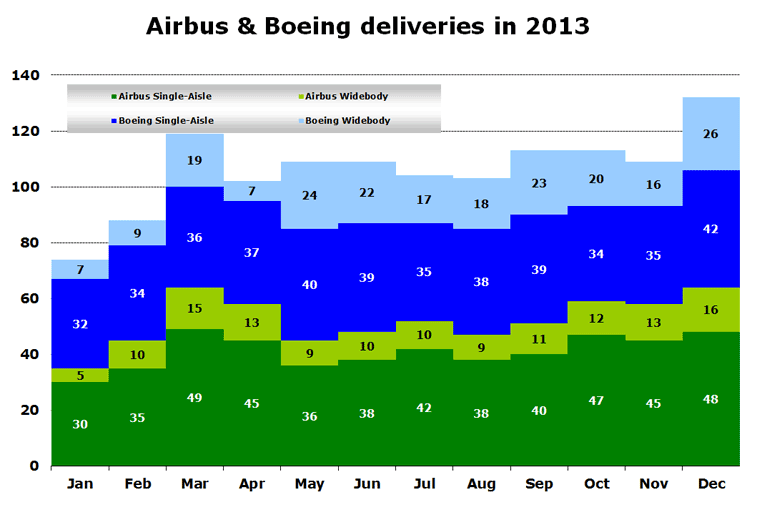 Interestingly, the discrepancies between the two companies appear to have grown with regard to wide-body aircraft output, with Boeing increasing the gap to 75 units (up from 53 in 2012). Following the stoppage in 787 deliveries in the first part of the last year, Boeing reinstated them in May, delivering as many as 65 units of the type during 2013. Across the pond, Airbus had a couple of weaker months as the year progressed, delivering just 25 A380s, five less than in 2012.

The European manufacturer remains the leader in terms of narrow-bodies in 2013, as it delivered 52 single-aisle units more than its US counterpart. This is despite Boeing increasing its narrow-body deliveries by 6.2% over 2012 figures. On 12 December, Aeroflot received a new A321, featuring the airline’s traditional white-blue-red colour scheme merging into Manchester United’s red and yellow crest. This comes as part of a multi-year deal signed in July 2013 between Russia’s leading air carrier and one of the world’s most famous football clubs. 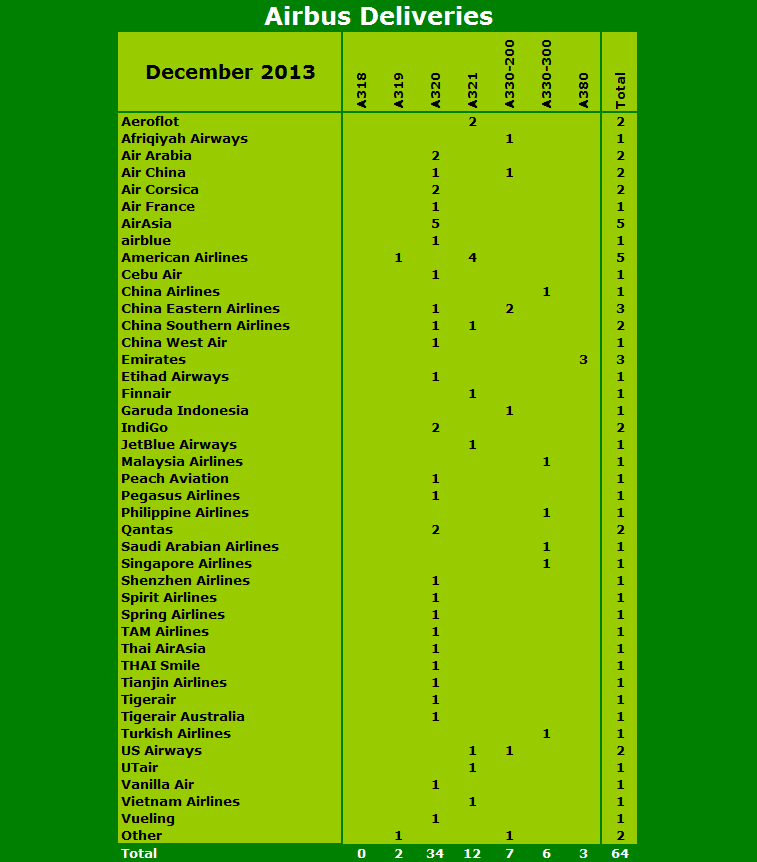 Airbus closed December with a total of 64 units delivered, which constitutes six units more than the amount delivered in November 2013 and eight less than in December last year.

Once again, narrow-body deliveries in December were led by the A320 (34 units) with an overall 48 single-aisle jets provided to carriers worldwide. AirAsia was one of two carriers to receive more than two narrow-body units from Airbus, as it took five A320s. In addition, American Airlines received one A319 and four A321s, while a further six carriers saw two Airbus narrow-bodies join their respective fleets in December.

A total of 16 wide-bodies were delivered in December, three more than in the preceding month, but two less than in the corresponding month of 2012. Two airlines in particular received more than one wide-body unit from Airbus: Emirates took delivery of three A380s, while China Eastern Airlines incorporated two A330-200s into its fleet. Emirates is the largest operator of A380s in the world with a fleet of 44 of the type as of 19 December 2013. 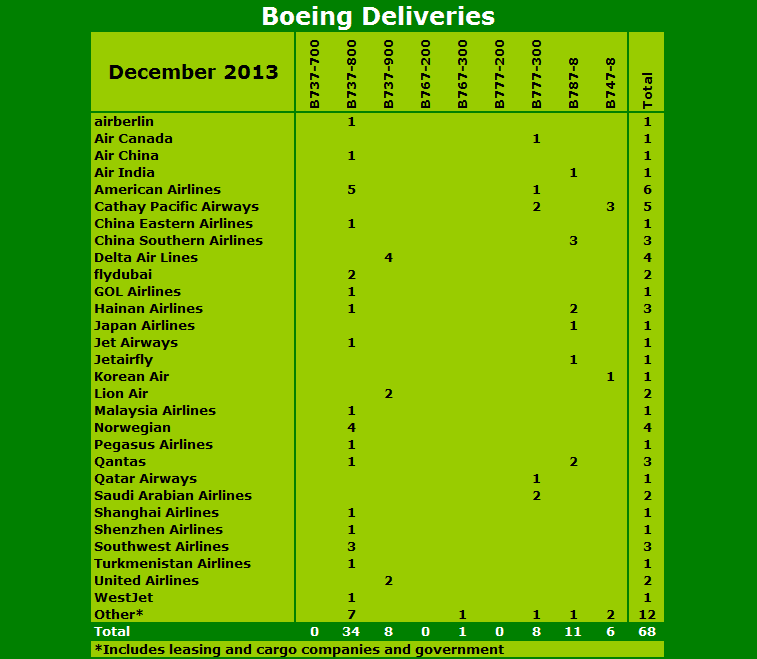 Boeing closed December with a new record of 68 units delivered, 17 more than in November and four more than in the corresponding month of 2012.

A total of 10 more wide-body airframes were delivered by Boeing in December 2013 than in the preceding month. Furthermore, the American producer bettered its year-on-year performance, delivering one more wide-body unit than the 25 it managed in the corresponding month last year. Following nine and six 787s delivered to carriers in October and November respectively, Boeing continued to clear the backlog with a total of 11 units of the type reaching customers in December. China Southern Airlines incorporated three 787-800s into its fleet, while both Hainan Airlines and Qantas took delivery of two aircraft each. On 4 December, Jetairfly, the Belgian arm of TUI Travel Group, celebrated the delivery of its first 787-800, named ‘Diamond’. Commenting on the delivery, Elie Bruyninckx, CEO TUI Belgium, said: "This aircraft isn’t only a perfect match with our innovative and sustainable philosophy. It is also a great asset in our strategy of offering unique holiday experiences to our passengers, especially when they fly between Europe and the Caribbean."